Destroy All Monsters: Marvel vs. DC Could End The Moviegoing World 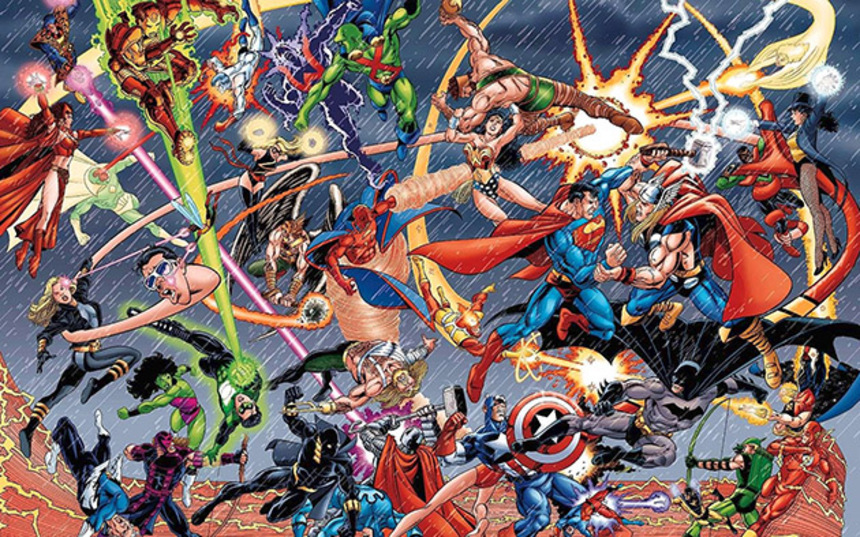 Here's why I worry about megafranchises: what's bigger than a megafranchise? As much as I admire what Marvel is doing - stacking their product horizontally as well as vertically for added tensile strength, creating therefor the proverbial Brick Shithouse of movie franchises - this concern has been with me for a while. Now that DC has limped gamely into the fray, competition will force both companies to push things even further. I'm wondering what could come next.

There's an infinities of scale problem here. It's not unique to the Marvel vs. DC fight. It's the sort of thing that meant, for example, when Magneto levitated a football stadium in X-Men: Days of Future Past, my brain scarcely bothered to notice it.

I'm sure there's a point in the history of moviegoing when a slender Irishman picking up the Robert F. Kennedy Memorial Stadium with his mind and dropping it on the White House as a kind of protective ring would have been in the top five spectacular visual effects sequences of all time, but in 2014 it's the equivalent of a mid-1980s car chase. You understand why it has to be there, but you've forgotten it by the time the next scene starts.

(Similar this summer in their indistinguishable spectacularness: the tower battle at the end of Dawn of the Planet of the Apes, the power station fight in The Amazing Spider-Man 2, any of the battle sequences in Maleficent, and I forgot to see Trans4mers altogether.)

We are becoming habituated to these infinities of scale. Ever since The Lord of the Rings or the Star Wars Prequel Trilogy, arguably, anything has been visually possible on screen with enough budget and enough care.

In the Marvel universe, on what seems to be an increasingly lengthy timeline, the filmmakers are apparently building towards some sort of Infinity Gauntlet storyline, wherein one character (probably Thanos, but it could just as easily be Rocket Raccoon at this point) will assemble all of the Infinity Stones that have been popping up in the Marvel U. so far (The Avengers, Thor: The Dark World, Guardians of the Galaxy, etc.). This will give him a Power Glove that can control reality, time, space, and so forth.

As the speculation goes, at that point, Marvel will - having saved their core Avengers cast from appearing in Avengers 3, while simultaneously building out their B-team with the likes of Ant-Man and Daredevil - put all of their superheroes together in a single mega-crossover franchise event, and have them save the universe from a villain who can actually destroy it.

Over on the DC side of the force, there's much less evidence to go on, besides the fact that in deciding to get into the megafranchise game, DC arguably set the new high watermark for the old chestnut, "go big or go home." The company announced ten films simultaneously, two of which are a two-part sequel to a movie that hasn't even finished production yet (let alone seen profit).

The rest feature spin-off characters who will presumably anchor their own solo franchises while interweaving into one another's solo- and teamup-movies. As such, DC one-upped Marvel's rollout scheme by arguably removing the word "roll." No rolling, no journey, no ramping up to get from here to there. Just "out."

DC characters have, on the printed page anyway, always had this infinities of scale problem built in. This is one of the reasons why Batman has been the stable's core character in terms of film adaptations. Batman is easy: he's a human being with money and gadgets. He fights human battles (with slight technological advantages).

Aquaman, Flash, Green Lantern, Wonder Woman and Superman, though? The same problem applies across the board: they're all Greek gods, even if only one of them literally purports to be.

Their power sets range from the too-specific-for-broad-storytelling (Aquaman, Flash) to too-gigantic-for-easy-conflict (Wonder Woman, Superman) to both (Green Lantern). You can't send Superman or Aquaman up against Bane, for example; a Batman-sized problem is a flick of a finger for Wonder Woman. (Frankly, regardless of how the canon has dealt with it over the years, it remains astonishing that these people spend any time with Batman at all. He's useless beside them.)

But content aside, the biggest problem in all this, from my standpoint, simply comes from that "versus" element. Marvel and DC, and to a lesser extent Fox and Sony, are now in a decade-long shit-fight for who can pull together the most market share for their incredibly expensive line of mega-sized superhero movies.

Leave aside the fact that a major failure in this frame could actually dent one of the Big Six's abilities to continue to be a movie studio. (MGM had Bond and The Hobbit in its pocket and still spent the back half of the last decade in hock.) At some point, doesn't this exercise also top out the audience's interest in seeing any more of the content at all?

I'm not referring to the glut of similar properties (though that will be a factor) and the perennial movie business column-incher called "audience fatigue." I'm simply referring back to the infinities of scale problem above. Great: you've assembled fifty superheroes and literally saved the universe. What now? What's next?

DC and Marvel's real-world pissing contest will force each of them to go bigger and bigger and bigger or go home, home, home. But on both a conceptual and visual level (and alongside them, a financial one), there is actually a ceiling on how big these movies can get. Iron Man vs. Captain America in Captain America 3? Brilliant, but what do you do for an encore? By the time we've seen a trilogy of linked films built around an argument between Thor and Black Panther on their way to the supermarket one day, we'll have seen just how quickly "save New York from aliens!" can become "yawn."

And when that happens, when growth is no longer possible and the whole audience has seen it all before, what, exactly, is the bait that is luring audiences out of their homes and into movie theatres at all? Don't tell me it's mid-sized adult dramas: they have those on Netflix now. Big-screen experiences are tilting towards omni-size to save themselves; we have three Avatar sequels coming. But when we've all flown around on the magical underwater pandas and had 140 frames-per-second HFR 4-D experiences till we're Na'vi in the face, what's next?

The rival studios could, I suppose, take that opportunity to have Batman and Superman tag-team Iron Man and Thor while Darth Vader and Harry Potter look on, with the rest of the Avengers and the Justice League and all of the Disney Princesses going full-hooligan after the match and tearing the moon apart. That would be spectacular, I guess.

Destroy All Monsters is a weekly column on Hollywood and popular culture. Matt Brown is in Toronto and on twitter.