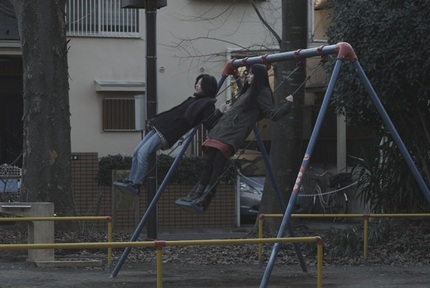 (This review won't scratch the surface, and that is fully intentional...)

At the start of Forma, you see one of its protagonists stick a pen in a cardboard box, making a small hole. She then puts the box on her head, and walks around her office, navigating just by her assumptions and the tiny bit she can see through the hole. And during Forma's 145 minute length, first-time director Sakamoto Ayumi demands her audience to do basically the same thing, and deliberately hides some obstacles, to confound you and make you stumble...

At first glance the story presented seems to be a simple one. During a chance encounter, Ayako meets Yukari, who she knows from high school. Yukari seems unhappy, stuck in life, and Ayako offers to help, even providing Yukari with a job at the same office she herself works at.

But then Ayako starts to exhibit rather bossy behavior. Nothing too bad at first, but after a while it clearly starts to cross the boundaries of what would be considered appropriate. Pestering and privacy intrusions soon follow. Clearly, there are some issues from the past resurfacing, but what exactly is happening here?

Rather than telling a straight story or showing a straight mystery, Sakamoto Ayumi challenges viewers to notice details and draw their own conclusions. The first 90 minutes or so are a bit of a slog, where not much seems to happen. Everyone acts natural in a mundane plot, in a drab, colorless world. With its many long fly-on-the-wall takes, some entirely devoid of sound, the film even gets boring.

But after that point, people start behaving weird unexpectedly, and you can't help but wonder: did I miss something? Parts are shown again, either with sound or from a slightly different viewpoint. You spot faces in the background which were there before, but now you recognize who they are. Their presence has consequences for how it all plays out, forcing you to re-evaluate the way you previously filled the gaps.

Such an approach can be brilliant, or just plain unfair and annoying, but writer/director Sakamoto takes care to keep a balance. I never felt cheated, and while I suspect I didn't catch the whole story, I do think I was able to get enough of it. Repeat viewings may alter this perception again, of course, as this is that kind of film. 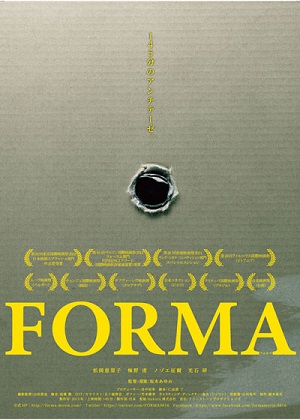 Best known as an assistant to Tsukamoto Shinya (of Tetsuo fame), Sakamoto Ayumi doesn't seem to be planning to follow in his footsteps. Before its screening at Camera Japan Rotterdam Festival, film expert Tom Mes introduced the film, and he stated that Sakamoto Ayumi feels she is more influenced by recent Iranian cinema and the likes of Michael Haneke. Which makes sense, as Forma very much reminded me of Haneke's Caché (Hidden).

The tagline on the poster for Forma translates to "145 minutes of opposition". What Sakamoto opposes is contemporary Japanese cinema, which is often created by committee with as little ambivalence or risk as possible, and where generic narratives are spoon-fed to the public, so nobody can fail to understand what's happening. Instead, Forma shows pieces and gaps, trusts its audience to be willing and clever enough to solve a puzzle, and rewards resilience with some wry humor, a few surprises, and a bleak outlook on humanity.

Sakamoto Ayumi has picked up an impressive number of awards worldwide with her first film. While I think it's maybe too soon to call her a revelation, she has certainly shown enough promise to warrant following, and it will be interesting to see what she'll do next.