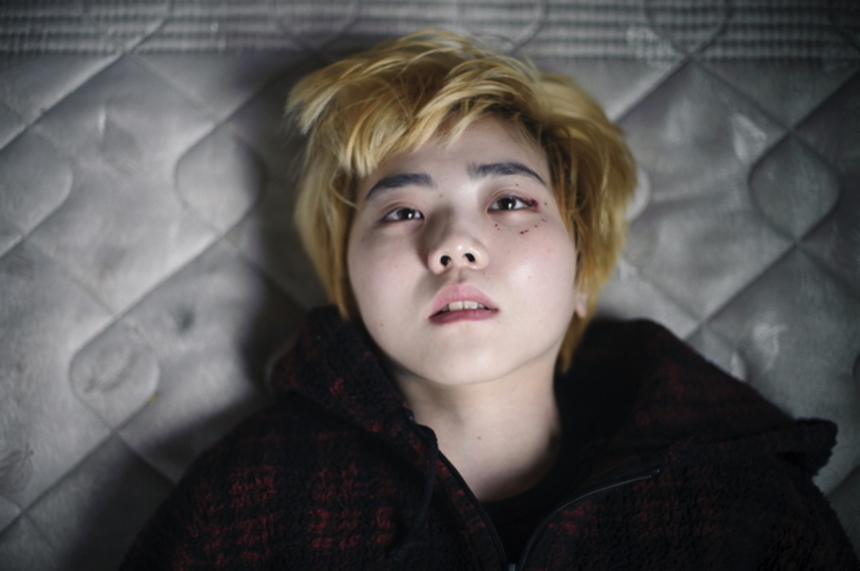 The lives of aimless youths at the bottom of the social ladder are the focus of Wild Flowers, a bleak look into teenage destitution in the streets and back alleys of Seoul. Uncompromising in its focus and brisk in its introduction to the sordid realities of a gaggle of bristly girls, Park Suk-young's debut is a kinetic but unfocused snapshot of wayward youth.

Eun-soo and Soo-hyang, a pair of runaway girls, save Ha-dam, another lost teenager when she is attacked by a man on the street. Together they weave through the wintry Korean metropolis to find shelter, only to be tricked by a young man who leads them to a rundown motel where they are locked up against their will and forced into prostitution. Tae-sung, one of their captors, grows fond of Soo-hyang and eventually helps them escape, but they won't get away from this squalid life so easily.

Starting off with a bang, this gritty indie wastes no time in introducing us to a particularly grim setting, with homeless girls fending for themselves against the elements and violent men. A shaky handheld camera documents their lives in extreme closeup and natural lighting, as the director foregoes any kind of aesthetic sheen. The plot and characters move quickly in the film's early stages, engaging with a surprising intensity, raw dialogue and quick plot changes. Like many cheap Korean social indies, Wild Flowers employs dank and dark visuals but with more bite and without the usual self-pitying lethargy. However, the initial buzz only lasts so long and the film finds itself in trouble following its promising set up.

Mired in its own darkness the film's novelty begins to work against it as the dour tone sucks the energy out of the story. By showing us such an unpleasant world and its unfortunate protagonists' desperate circumstances, the narrative affords us no hope or opportunity to root for the young girls, thus negating any dramatic thrust the film might otherwise have had.

Though a little hard to grasp, the characters are unique, unlike those typically found in Korean indie cinema, and the fresh and raw performances of the young cast are to thank for this. Among them, the most impressive is Cho Soo-hyang (the lead actresses have the same names as their characters), who brandishes a sliver of authority within her fringe group of runaways, yet is clearly out of her depth and lost in a world that has no place for her. Cho impresses by showing off a conflicted character in extreme situations during a touchy period of teenage growth.

Wild Flowers starts to meander and lose its feet at the halfway point. When it begins to stage increasingly long and talky scenes in a threadbare tale of aimless youth the film meanders. The initially frantic but involving plotting making way for a philosophical narrative. Furthermore, after quickly introducing a medley of characters with much gusto, it shies away from venturing beyond the small world it has carved for itself, rendering it claustrophobic.

As it moves towards its melodramatic finish, unfortunately filled with slow motion, bitter tears and saccharine piano ditties, Wild Flowers fails to provide any new insights. It seemed like director Park had something to say, but early on in the course of his film he presses his foot down on the brake and steers his debut to a familiar path, when he should have been gunning it off road.