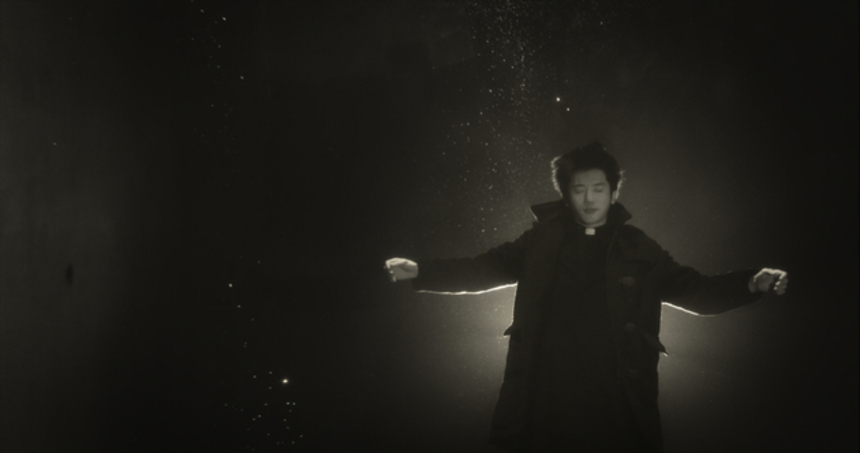 With black and white lensing, cheerful yet destitute protagonists and the absence of a clear narrative, the philosophical vagabond film Han River, benefits from a style and focus that sets it apart from the bulk of recent Korean indie fare, yet its offbeat musings and muddled pacing will leave some viewers wanting something a little more concrete.

A young priest, upon learning of the suicide of a woman he once loved, perches himself on the railing of a bridge over the Han River. Just as he is about the jump to his death, a vagrant comes up to him, informing him of a bet going on concerning his imminent fate. The priest jumps anyway but his dragged back to the shore by the homeless man and subsequently absorbed into an offbeat community featuring a disgraced doctor, a transgender man who is estranged from his daughter and an aimless young girl who has fallen pregnant.

From Lee Moo-young, the director of The Humanist (2001) and a co-writer on many of Park Chan-wook's early masterpieces, Han River immediately announces itself as something a different with striking monochromatic aerial photography of the estuary that bisects the Korean capital accompanied by a jazzy score. The oddball characters we are quickly introduced to all burst out fully formed and the curious nonchalant balance that holds their loose group together speaks to a urban malaise and confusion plaguing a society that is at once high tech and completely disconnected.

As they are with many Korean films, the bridges that glide over the Han acts as important symbols in Lee's film. Fetishized with low-angle, fixed shots that show off their austere grandeur, the bridges are dead zones, still monuments of steel and concrete over the wide expanse of the Han. And yet, constantly buzzing with traffic and oft-frequented by Lee's vagabond protagonists, they are busy arteries that fasten together two halves of the world's second largest metropolis.

Some of these bridges are famous for being popular locations with suicidal youths and Han River's first sequence calls to mind other opening scenes in Korean film, such as Bong Joon Ho's The Host (2006) and Lee Hae-jun's Castaway on the Moon (2009). Lee's film shares a particularly large amount of social concerns with the latter as it explores the ironic disconnect of contemporary Korea (it also features cameos of Jung Jae-young's duck peddle-boat/makeshift home).

However, the film may share the most in common with an older work, Lee Man-hee's The Road to Sampo (1975). Much like that 70s masterpiece, Han River offers an irreverent and earnest exploration of marginalized characters that fail to fall in line with the status quo. Earnest in its depiction of social fatigue, the film is initially endearing, but a stubborn reliance on narrative ellipsis and a wilful obfuscation of some of the character's motivations scupper the film's forward momentum.

With clear and artful cinematography, as well as magniloquent dialogue, Han River certainly looks and sounds the business but what's missing is a strong narrative clutch. As it stands, the deliberate vagueness and creeping morbidity of the narrative is its undoing, turning the fresh and snappy banter into at first bleak and eventually banal observations on the human condition.

Featuring a fun and confident turn by filmmaker Bong Man-dae as the de facto leader of the homeless troupe, Han River calls to mind the breeziness and irreverence of Bong's recent work Playboy Mr. Bong (2012). With weightier dialogue and thematic concerns, the film also owes much to the Korean New Wave of the 1980s as it focuses on displaced Korean characters, torn out of their society and forced to meander endlessly in search of answers that can never materialize. Lee's film isn't quite as dark as those former works but by the same token it also lacks their staying power.