Busan 2014 Review: FIRES ON THE PLAIN Drags Us Into The Abyss 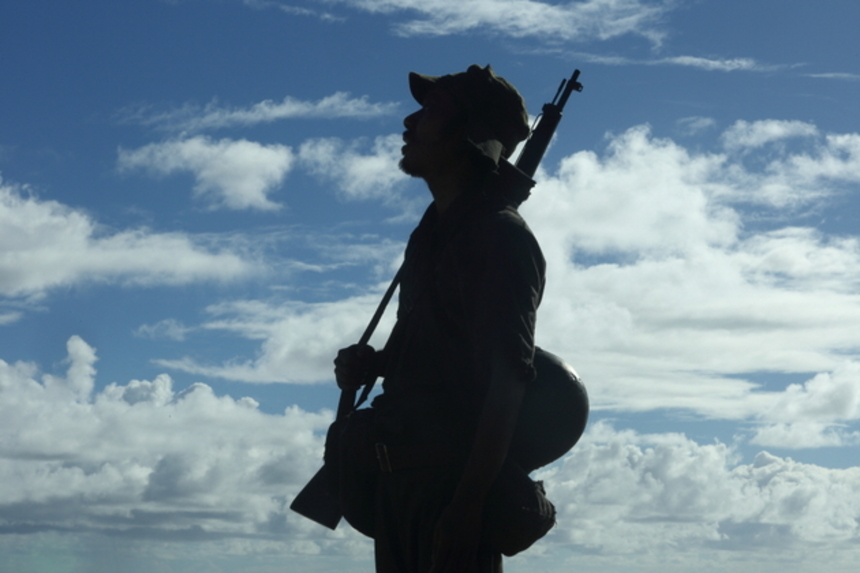 Though based on Ooha Shohei's book of the same name rather than Ichikawa Kon's languid and harrowing 1959 film, Tsukamoto Shinya's Fires on the Plain was always going to be an entirely different beast. Low-budget and with a frenetic and almost crude aesthetic, it may not immediately strike viewers as one of the more effective anti-war films in recent years, but its madcap mix of shaky, high-contrast photography, boundless psychological despair and liberal doses of cheap but stomach churning gore, ably earn it that title.

Suffering a wheezing cough that is likely a sign of tuberculosis, Tamura, a Japanese soldier is shipped back and forth between a regiment that doesn't want him and a makeshift hospital that doesn't have space for him in the thick, hot and humid Filipino jungles towards the end of World War II. Dry, spindly and hard to come by yams are the only form of currency among the gaunt soldiers in the jungle, and the sick soldier makes his way through the brush in search of more food and some shelter. Perhaps resigning himself to his fate, he does not appear to have any greater goal in mind but before long a meets another pair of soldiers who inform him that all troops have been ordered to retreat. Together they brave the elements, but it isn't long before greater dangers present themselves within their ad hoc unit.

From the opening frame, there is no respite from despair as Tsukamoto immediately plunges us into a man's daily horror and only drags us further into the abyss with each passing scene. Hope has no place in this feverish, waking nightmare, in which mental ruin lurks around every corner.

Whereas Ichikawa nestled us into the desperate plight of his characters through a characteristically elegant mise-en-scene in his 1959 film, Tsukamoto does what he knows best, which means that his film is rarely pretty to look at, though it does feature a few captivating compositions, and drives forward with a breakneck pace assembled though dishevelled editing, as though tying together roughly hewn branches.

Save for a few bullets that spray down from planes passing overhead, the enemy remains invisible. In fact, almost all of the people we see on screen are Japanese soldiers as the locals seldom appear. Their dire struggles and the in-fighting that quickly escalates among them provides ample drama that obviates the need for any foreign catalysts. More than anything, the antagonist in this film is abject terror, the darkness within us all that comes out in the sheer madness of war and roams unchecked in the brush.

Sick in body to begin with, Tamura's illness soon becomes a mental one as he first witnesses things than no person should ever see before committing soul-destroying acts of his own. Performing under thick makeup that blurs the lines between sick person and zombie, director Tsukamoto also appears on screen in his own film by playing a character that we never learn anything about, save for sharing the present that we witness him in. Already physically and mentally ravaged at the start, Tsukamoto doesn't give much room to establish his character or provide him with an arc. Rather than an individual, he is a symbol for the atrocities of war and their effect on humanity. Shuffling about listlessly and absorbing the daily horrors in this theater of the grotesque, Tsukamoto's performance is impactful in an emblematic way rather than a personal one.

Fires on the Plain's DIY style may rub many viewers the wrong way but its message is strong and received loud and clear. Among a million other antiwar films, Tsukamoto's stands out for the sheer force of its terrors and the darkly hypnotic trance it provokes in spite of its technical roughness. Though completely different, Fires on the Plain can't hope to match the first film based on the book, but Tsukamoto's vision, which is very much his own, is plenty valuable in its own right.

Do you feel this content is inappropriate or infringes upon your rights? Click here to report it, or see our DMCA policy.
biffbusan film festivalfires on the plainjapanjapanese filmnobishinya tsukamotowwII

More about Fires on the Plain