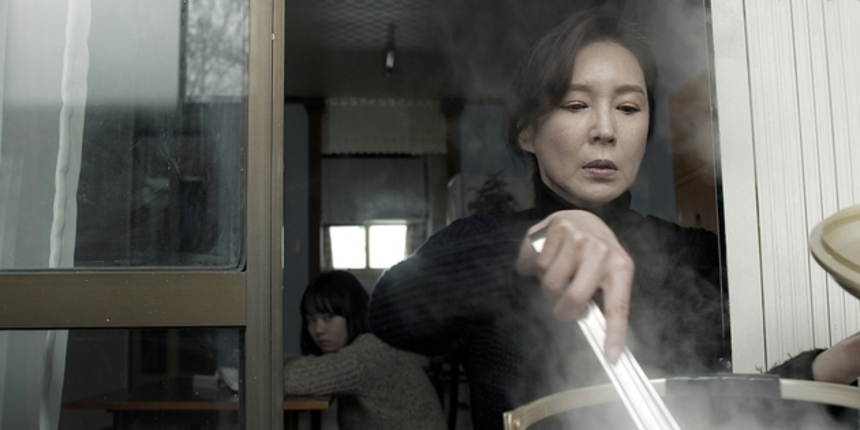 Following a pair of indulgent films that awkwardly straddled the balance between fantasy and reality, the multi-hyphenate Ku Hye-sun, a well known actress, singer and artist as well as director, returns with Daughter, her most mature work to date.

An only child lives with her overbearing mother in a small apartment in Incheon, a major satellite city on the outskirts of Seoul. Forced to study hard and endure a torrent of verbal and even physical abuse from her religious parent, the girl leads a difficult life. Things go on in this fashion until she meets her next-door neighbor, a kind piano teacher who takes pity on her. Years later, as an adult and now far from removed from her family, she discovers that her mother has contracted a terminal illness and visits her bedside..

Echoing various issues plaguing Korean parenting in modern Korea, Daughter weans its drama from a strict mother who takes her ample anxieties out on her innocent child. With a similar affectation for the genteel illusions that mask much of Korea's middle class, this is familiar territory for Ku. However, by exhibiting a previously absent restraint and focusing on her characters above all else, her latest delves below surface level for the first time.

In the modest but vraisemblable world Ku depicts, pale-skinned, soft-spoken women play pianos and wear turtlenecks, emblematic of a desire to reach a higher plain and the aggressive projection of certain values and ideals through visual signifiers to promote this facade. With a lilting yet bloodless visual sheen, she highlights the dangerous shortfall that exists as a result of modern Korean citizens' penchant for gussying up the mundane. Her portrait of a young girl and her overbearing mother is intimate and feels personal in a way that could only come from experience.

As with her other films, music plays an important role in Daughter. The neo-romantic musical stylings, at first lilting and fairytale-like as they accompany a young girl's desire to sate her curiosity, become more classical when the piano is introduced as a form of escape for the child. Further highlighting the positive influence of the music are the teacher's colourful sweaters, the only dashes of colour in an otherwise cold and muted palate.

Opting for simplicity throughout, Daughter employs a much clearer and effective aesthetic than Ku's former works Magic (2010) and The Peach Tree (2012), yet the over reliance on extreme closeups with handheld shots betrays a lack of ideas in the visual department. Working with a cramped location may not be ideal, but it hasn't stopped more creative filmmakers from crafting involving spaces and tones.

Where the film most overplays its hand is in its caricatured representation of the mother. Though the character comes from a real place, veteran actress Shim Hye-jin lays it on too thick in her portrayal of a foul-mouthed, violent mother. Rather than a nervy, repressed middle-aged woman, she seems more like a lunatic. Yet her performance has its highlights, particularly when she plays the mother in her most credulous and insecure moments, such as when she is easily convinced by her neighbor to let her daughter take piano lessons, as this skill could help her with her studies and social standing.

Least convincing is when the film is at its most serious, highlighting the horrific abuse that the daughter is subjected to. Rather than shocking, these come off as ludicrous and upset the tonal balance of the film. Still, with a bifurcated timeline that highlights the inherited fears of motherhood and a clear focus in its aims, Daughter proves a big step in the right direction for Ku, though I'm still not convinced she has what it takes to be a full time filmmaker. However, following this marked improvement, I'm eager to see what she takes on next.