Busan 2014 Review: A MIDSUMMER'S FANTASIA Effortlessly Draws You Into Its Subtle Tale 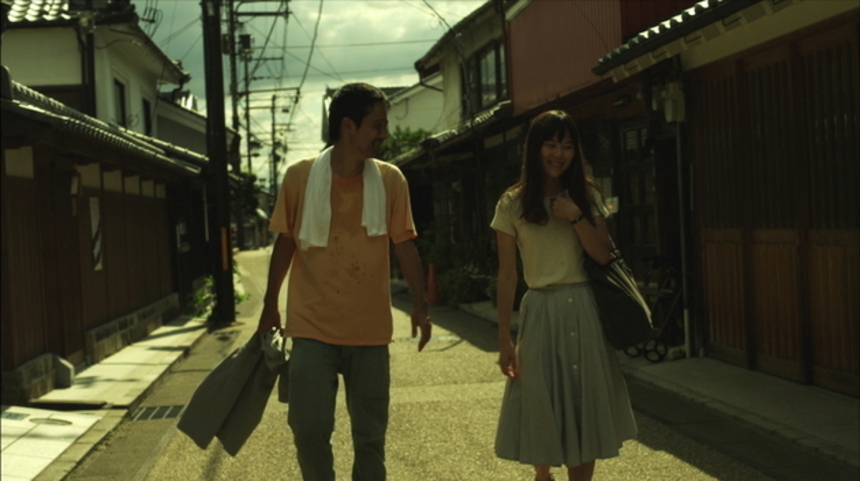 Taking place in the quiet town of Gojo in Japan, an ageing community tinged with a lingering sadness and marked by stillness, A Midsummer's Fantasia is a wistful, hopeful and nostalgic third feature by rising Korean indie auteur Jang Kunjae.

Split into two chapters, Jang's film begins in black and white, as a Korean director visits Gojo to do research for his latest film. With the help of a city council member and an interpreter, he tours the area and meets the elderly locals. Switching to color, the film's second half presents a tale hatched in the filmmaker's mind of a burgeoning romance between a local man and a young Korean woman, on her last stop in Japan before returning home.

A commissioned work of the Nara International Film Festival, an event spearheaded by Japanese filmmaker Kawase Naomi (who serves as the film's producer), A Midsummer's Fantasia opens in the warm confines of a small cafe, buzzing with the chatter of its senior patrons. Jang's film explores a small community which has been gutted of its youth, as men and women have migrated for the cities and their promise of employment and creature comforts.

For its documentary-like first half, which is essentially a recreation of the director's own experience researching for the film, Jang's camera remains still as it gazes on the village's inhabitants (none of whom are actors, save for the city council member) and serves as a witness to their daily routines and conversations. Jump cuts add to the non-fiction style and punctuate its deliberate pacing while the monochromatic lensing evokes an older time and turns Gojo's interiors into warm and welcoming locales.

Director Jang has always placed himself at the centre of his narratives, employing surrogates that have highlighted the various stages of his life. Following the teenager of Eighteen (2009) and the young husband of Sleepless Night (2012), his latest is the first to reflect on his career as a filmmaker. Unlike his earlier efforts, his surrogate here is no longer the driving force of the narrative, acting merely as a gateway into a fictional tale of romance that he accents with his particular proclivities. Yet the film is also largely a document to his creative process, offering us a peek into an artists' mind.

Deliberately sped down, to reflect the unhurried lifestyle of the Gojo community and the slow nature of cross-cultural communication, the first segment acclimates us to the tempo of the film's director and its locale before guiding us into the more colorful back half, which is introduced through an iridescent and literal burst of color, by way of a night time fireworks show.

The beautiful, sweet and unfulfilled romance that makes up the second part of the film, staged with great restraint yet richly evocative, is touching and almost heartbreaking in its simplicity. Though set in the present, it yearns for a less complicated past and draws its strength from why is left unsaid rather than what is shown on screen.

Once again, Jang demonstrates his keen ability to say so much while seemingly doing so little as the pauses in his work are often more important than the dialogue. Filled with unuttered thoughts, pregnant with desires and fraught with anxieties, these moments reflect each and every one of us and the silent machinations that drive our every move. However, skilled an artist though Jang is, it would be for nothing were it not for the transparent and seemingly effortless performances of his endearing cast. Employing a great deal of improvisation, Kim Sae-byuk and Iwase Ryo shine as the potential love birds. Effortless and affecting, the duo are a joy to watch on screen and their final scene together, light on words but brimming with soft passion, is a memorable ode to love.

Much like his previous film, Jang's style features an abundance of long shots that film the characters from a safe distance. Yet this separation doesn't prevent us from getting close to the protagonists. In particular, his use of unobtrusive steadicam for lengthy tracking shots makes us feel as though we are right beside the protagonists.

Due to its split and Brechtian structure, A Midsummer's Fantasia may not travel quite as far as the subdued yet triumphant Sleepless Night, but further proving Jang's innate ability to visualize the ineffable and demonstrating his willingness to experiment, it is a formidable addition to a filmography that is quickly turning into one of the most accomplished in modern Korean cinema.