Book Review: APPROACHING THE END Brings Us To A New Understanding Of Apocalyptic Cinema 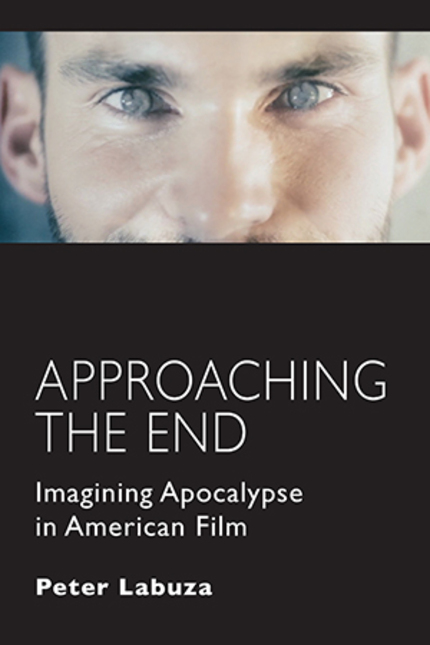 We are living in a cinematic world. It seems that every day that passes it becomes more and more apparent that our experience of the world, how we see it and build our opinions based on it, is being strongly mediated not only by the media that surround us, but also by ourselves. How we like to live in the public, through the ways in which we share our lives, come about in a narrative fashion. We do it with cliffhangers and spoiler alerts. Normal people talk about their lives on Youtube, using the same editing software that major blockbusters use, adding special effects or outrageous texts, and at times they have a bigger audience than those same blockbusters.

That's why when it comes to any crisis, of any kind, whether it be wars or sickness, we immediately focus our minds on how much our civilization would be destroyed, how we can survive, that urge that we have to live through, see the end, because we know it will be cinematic. In a way we have the hope that it will be a three-act structure that will end with us being the heroes. It is the way we live now. We see Ebola and we think about zombie movies and the sickness that would barren the lands that are now largely populated.

Are we sick? We are only living in a world that likes to think itself as fiction. It's not only that we imagine our lives, our moments as part of a story, we go to the extreme of imitating everything that we see in our modern movies. I think that how we see the possible apocalyptic scenarios is connected in some way to the fact that the most popular and largely budgeted films of the past three years have been those that are about the Apocalypse or in post-apocalyptic scenarios.

The proliferation of these kind of films is one of the starting points of Peter Labuza's first book, 'Approaching the End: Imagining Apocalypse in American Film'. He initially reflects in his introduction that 'apocalypse is in', both in and out of the silver screen, and he continues with his disappointment towards the majority of these movies, mainly because they always seem to give hope for a future, they are about 'the endurance of humanity through these crises'. I think that while Labuza doesn't explore those movies, he gives an important first look at something we should look into: our appetite for destruction, but a destruction that won't touch us.

Labuza tries to bring forward the thesis that the most valuable and critically challenging works that deal with apocalyptic imagery and plot, are among those that don't give hope for a story afterwards, those that don't have the protagonist or even humanity live after whatever happens. He firstly connects to one of the bleakest and most unforgiving genres that has ever existed: film noir. I must say that, while being interested before in this kind of narrative, this must be the first book that can finally explain to me what film noir is really about, and he does it simply, by comparing it to melodrama, as its reverse of sorts, a mirror image, but not quite.

The book is structured in a basic manner, but at the same time in the most efficient manner, going from a definition/structure of how noir works, then to the apocalyptic noir (focusing on films like Kiss Me Deadly, The Lady from Shanghai and The Big Heat), to then jump to the films that he will compare to noir and their bleak viewpoint of the world, when brought forward through apocalyptic narratives and devices. He divides these films in three groups: one about the religious apocalypse (God Told Me To, The Rapture, Days Of Heaven), the tech apocalypse (Strange Days, The Terminator, They Live) and for the final chapter, he goes on a deep analysis of the structure of the (unfairly) maligned Southland Tales.

Labuza gives a fair shake to every film, pointing out both their relations to noir and how the apocalypse occurs in each of them, even if in some it's not quite apparent. He gives further analysis to social, religious, technological and structural points that each of these movies give, with a prose that's easy to read and rarely academic. This brings forward my point about the necessity of us understanding ourselves in the midst of this life not only surrounded by media, but turned into media itself. Labuza's is a book that takes a look at how we can see these movies as more than "genre" pieces, as all of them are, but as reflections of the time and what we are right now.

The prophetic elements of films like Strange Days, Southland Tales and even God Told Me To are important in terms of how they are presented in this book. They are visions of a future where everything seems to point to our self-destruction. We seem to be living those final days now, and that atmosphere that surrounds is akin to the one that was the main drive of noir in the 50's: the anxiety of the end of the world, the perspective of how everything could end any second. That is transported to these movies that are now more important than ever to see how we've changed towards that anxiety.

There is a reason as to why most of these modern movies weren't financially successful (The Terminator being the exception that proves the point) was not because of their bleak view, but because that view has changed with time. The End Of the World has become normalized. We live in it. It's not a fear, but a reality. We don't see the end of the world as something that we should avoid, but as something that will surely make one hell of a movie... if movies ever become a thing after everything's destroyed.

As you might notice, I've been reflecting a lot due to the reading of this book, so all I can say is that I fully recommend it. It's a book that makes straight-faced observations in regards of the theses that it tries to put forward, but that doesn't mean that it doesn't allow a discussion based on the points raised here. For example, I must say that I was mostly displeased with the chapter regarding Southland Tales, not because I dislike the film (I think it's one of the most misunderstood masterpieces in the history of cinema), but because we get out of it different things, and while I could get what Labuza was getting at, I couldn't buy it.

Nevertheless, that is mostly a personal point on a book that is an easy read at 107 pages. It is well researched and with lots of references to go further and lurk more regarding this subject. Let's hope not only that Labuza continues writing stuff like this, but there are also more books consciously revealing our psyche regarding these kind of movies.

You can order the book here.

Do you feel this content is inappropriate or infringes upon your rights? Click here to report it, or see our DMCA policy.
apocalypseapocalyptic cinemaApproaching the End: Imagining Apocalypse in American Filmpeter labuzasouthland talesthe terminator