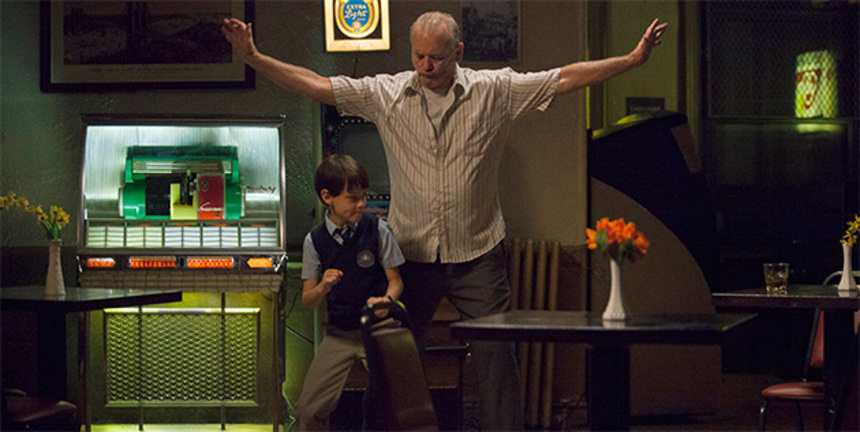 Not everybody watches quite as many films as some of us. There are those where getting out to a theatre isn't a weekly (or, in my case, daily) occurrence, where the schlepp of getting there, standing in line, getting a ticket, and spending a few hours in a darkened theatre requires a bit of patience and a lot of conviction. Normally there are event films that draw people in, big spectacles that just can't be replicated at home. Then there are the arty films that are still accessible, not something that's too dour or experimental to seem out of place at the multiplex, but still a film with bite, perhaps something melancholic with a darkly humorous streak to it.

St. Vincent is a perfect example of this kind of film. It's certainly treading on well-worn ground, but it's a movie told with a mixture of earnestness and dexterity that it comes together in a pretty satisfying way.

At its core this is a showcase for Bill Murray, here channeling his curmudgeon shtick that he showcased in the likes of Rushmore to its inevitable, "get off my lawn" extreme. Murray is joined by a cast that gives it their all, from Melissa McCarthy in one of her least objectionable performances, to an almost unrecognizable Naomi Watts as a Russian "lady of the night". Chris O'Dowd does a terrific job as a preacher teaching to a surprising ecumenical group of kids, and newcomer Jaeden Lieberher provides the perfect balance of precocious without ever succumbing to being pernicious as is the lot for some child performances.

Yes, this is a feel good film, but its darker elements are well shaded, and Murray's cantankerous charm does much to propel the story. There are echoes to the likes of About Schmidt, but despite its flaws I actually found Vincent to be superior to that film. Perhaps not coincidentally, Jack Nicholson was first asked to do this role and despite my love for Jack I'm not sure he would have pulled it off with anywhere near the balance between saint and schmuck that Murray manages to do.

Things go bad, and then things get better, but along the way there are more than a few moments of both genuine chemistry between the players and some funny and moving story elements. Director Theodore Melfi knows when to get out the way, never coming across as showy, but this actually serves the story pretty well.

Again, this isn't faint praise - it's hard to get a film like this right, avoiding more than its share of pitfalls where it might turn into a maudlin mess. St. Vincent may not have lofty ambitions, but as one of those films that people go and see that gives them some sustenance, something with a beginning, middle and end that still has elements that make the best of independent cinema work, it's a perfectly fine work.

The movie is worth seeing for Murray alone, yet along the way I'm betting at least some of you will fall for its charms, appreciating not only the sly wit and well-earned moments of catharsis, but also the relief that a story of this type can be told without it completely falling into risible cliché.

Do you feel this content is inappropriate or infringes upon your rights? Click here to report it, or see our DMCA policy.
Bill Murrayreviewst vincentTIFF 2014Theodore MelfiMelissa McCarthyNaomi WattsChris O'DowdComedyDrama