Toronto 2014 Review: SONG OF THE SEA Is A Timeless Delight For All Ages 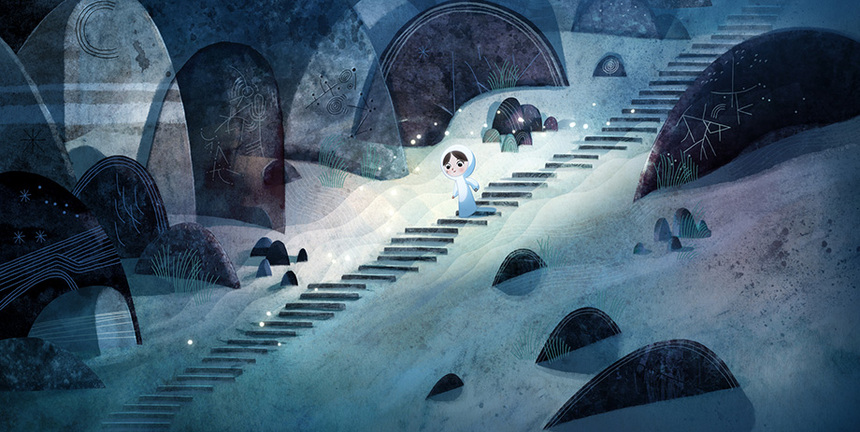 Irish animator Tomm Moore made - to put it mildly - a very large impression with his 2009 feature debut The Secret Of Kells, a gorgeous piece of work with rich storytelling high in adventure and genuine emotion that earned the film an Oscar nomination. And so, five years later, expectations could not possibly have been higher for Moore's follow up work Song Of The Sea. He exceeds them all.

Ben's family is a small one, one marred by tragedy. Growing up on a lonely island where his father is a lighthouse keeper Ben was perfectly happy with just his puppy, his father and his mother who he adores with her wealth of stories and songs. But their happiness is broken with the arrival of youngest member Saoirse for her birth was difficult and the arrival of one left balanced by the departure of another. And so years later we find just Ben quietly resenting the sister who ended their mother's life with her arrival, Saoirse not having spoken a word in her six years of life, and their father still wrestling with the grief of losing his beloved wife. Theirs is a loss that is shared but experienced in complete solitude. And it will take a great adventure to bring them together.

Saoirse, you see, is not exactly what she appears to be, nor was their mother. She is a selkie, one of the fairy people, drawn inexorably to the sea. And when their grandmother discovers the girl in the water, believing her near drowned, the two children are whisked away to the big city with their island home proclaimed unfit for a child's safety. But, if anything, the city is less safe, not more though not for the physical reasons you might think. For there they meet a trio of the few remaining fairy people and learn the tale of how the fairy people need the selkie to sing her song to send them all safely back home while also coming to the attention of the fearsome owl witch, an ancient fairy who traps the emotions of her magical kin in enchanted jars, transforming them to stone in the process. And so the children must look to the past - to the stories that their mother taught to Ben when he was very young - to help them face their fears, make their way home, and save the fairy people.

A tale that weds absolutely gorgeous artwork with beautifully nuanced characters and a deep but natural rooting in ancient folk tales and magic, Song Of The Sea has an assured and timeless quality to it. It is the sort of story that feels as though it always existed somewhere, just waiting until now to be told. Like Miyazaki's brilliant My Neighbour Totoro it does not shy away from notions of human frailty and mortality and as with Miyazaki's work it trusts that its audience - children and adults alike - are not only capable of understanding such issues but that it's important for them to do so. And it wraps the whole thing up in such a delightful adventure that you're scarcely aware of the larger themes as they play out, even as rich as they are.

Moore again favors very clean and simple character designs set against richly textured backdrops. His style feels very natural and organic - very much befitting the earthy roots of the original legends - with nary a scrap of 3D animation to be found. The voice cast - including Brendan Gleeson as the father and Moone Boy's David Rawle as Ben - is stellar from top to bottom, as is the music which is a key factor throughout.

Song Of The Sea is a film that runs counter to current trends in myriad ways. It follows no trends in mainstream animation. There are no obvious merchandise tie ins. I'd wager there was minimal - if any - test marketing done on the script. Unlike virtually anything in American animation today - up to and including Pixar - this is a film that does not feel like a product in any way. Song Of The Sea is not about selling units, it's about story and heart and emotion and wonder and craftsmanship and because of that it becomes timeless, a beautiful piece of art that will delight audiences old and young and confirms what many suspected of Moore after Kells: The man's a master storyteller, and we can only hope he has many, many more stories to tell.

Do you feel this content is inappropriate or infringes upon your rights? Click here to report it, or see our DMCA policy.
animationirelandreviewsecret of kellssong of the seatomm mooretoronto film festival

More about Song of the Sea