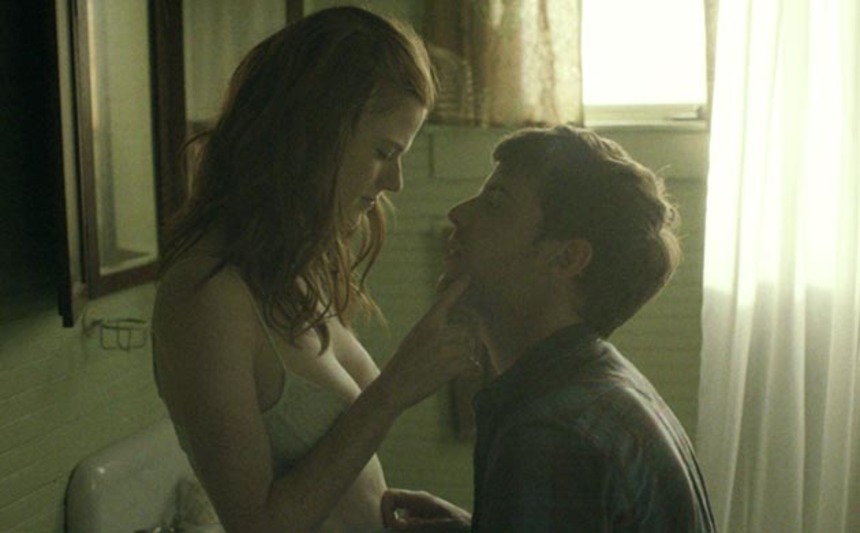 From Honeymoon's opening montage of our newlywed couple reminiscing about falling in love, you might think you are settling in for romantic drama about the challenges of starting a life together. You'd be wrong.

While plenty of challenges await our young lovers at their lakeside getaway, they're not of a typical marriage quarrel nature. No, something is very wrong at this idyllic cabin in the woods. Is there something supernatural afoot, or is there a more logical explanation? While it wouldn't be right to reveal that information, it would be very wrong not to point out how impressive this debut feature from Leigh Janiak is. Honeymoon is a taut thriller that very quickly gets up to full speed - and once there, plunges the audience face first into the realm of terror.

The aforementioned newlyweds, Bea and Paul, are played by Rose Leslie and Harry Treadaway. Leslie will be immediately recognizable to TV fans from her roles on Game of Thrones and Downton Abbey. Treadaway is perhaps best known to indie film-goers as the challenger to Michael Fassbender in Fish Tank. Here they've both shed their Old Country accents for an American lilt and nary a stray syllable is detectable. They're also quite good actors and very convincing as two people fully in love.

This love has propelled their relationship and while we don't get all that much detail, it would seem that the couple's marriage was personal, small, and perhaps somewhat quickly planned affair. Their honeymoon is just as austere; a week at Bea's family's lake house well before the summer crowds have arrived. It doesn't take long for this plan to hit a speed bump as Bea runs into an old teenage fling whose strange behavior and effect on Bea throws Paul off guard. This is quickly followed by some mysterious lights and a sleepwalking episode that leaves both Paul and the audience thinking not everything is okay with Bea.

While the scares will surely have you clutching your armrest, they work so well because they are always earned. When Bea starts acting really strange, Paul doesn't just ignore it and wait for the proverbial knife to find his back like some films might do. Instead he gets proactive and tries to get to the bottom of what is going on. This has the effect of causing a rift between the two, and as Paul starts to get more aggressive, we start to wonder if maybe something is wrong with him too.

Janiak does an admirable job of keeping the audience off guard without letting things feel manipulated. She is obviously a student of horror, but uses this to know what not to do, just as much as what works. But don't be scared away by thinking this is a kind of movie like The Cabin in the Woods that riffs on the tropes of the horror genre. Honeymoon is very much its own beast; a good story, excellently told, and very, very scary.

Do you feel this content is inappropriate or infringes upon your rights? Click here to report it, or see our DMCA policy.
Harry TreadawayLeigh JaniakRose Leslie