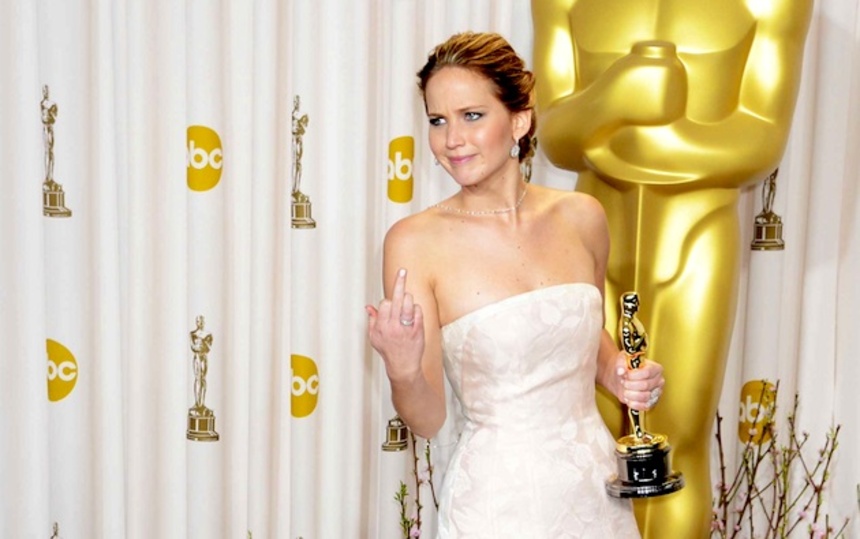 So: this week, some sexual predators on the internet released private photos of various female celebrities, including fan-favourite Jennifer Lawrence. They did this, I imagine, because the actions of various terrorists in the gamer community last week weren't quite enough of a nail in the coffin of any notion of masculine respectability left on the planet earth. Thanks, predators and terrorists! It's awesome having a penis this week.

(What it's like to be male while other males are behaving this way is so entirely beside the point, so I won't dwell on it - but I will say that if #NotAllMen was an utterly moronic, if at least halfway understandable, response to the #YesAllWomen movement earlier this summer, the events of the past week have done an astonishingly good job of rendering the point moot. Let's just go ahead and assume it is all men, from here forward, because from a structural standpoint it no longer makes any difference. Men: we have cowards, traitors, and sexual assailants in our midst; and as long as that's true, we have no bloody right to clarify our individual virtues.)

Did I look at the pictures? Yes I did. Didn't have a choice; they were thrust in my face on the internet. I'm following the wrong people, apparently. (They're gone now.) That's a sexual assault of a different kind, and it's lovely to realize that members of my (I thought) well-vetted community of online personalities are, themselves, sexual assailants.

What was more alarming: the males who circulated the pictures, or the females who did the same thing? Exactly how close to who you, specifically, are does an indecent and illegal act have to be, before the one-step-removed insulation of the internet finally breaks through to your personal, human empathy and creates a response? A step or two closer to total indecency, I presume, based on all the J-Law titties on twitter and Tumblr on Sunday night.

I'm beginning to think that empathy has no place on the internet, and that the internet's "duck blind" approach to communication - every action no less than one step removed from an actual, visible human being - has basically turned it into a psychopathy factory. Perhaps that's the grim view, but there can be no denying: the internet is harbouring a dandy nest of psychopaths this month.

I'm noticing that the way we ogle celebrity sexuality is not terribly removed from how we obsess over celebrity death. (For certain terrorists in the wake of the death of Robin Williams, the activities were one and the same.) Sex and death are always connected and the human race is about equally shitty at dealing with both, so I guess the theory tracks, but the meaning underneath is as skeezy as it gets.

In both cases, we claim a personal ownership over these people - moviestars, British monarchs, heiresses, and other famous folk - that is weird, intense, and utterly without base in the real world where the word I used to describe them is "people."

People, people. Where, exactly, in the decision to make The Hunger Games is the implicit foreclosure upon a person's personhood? Exactly how many times do we need to confer non-person status upon a person or group of people before we, collectively, get the "this is not good" message inscribed on our basic human credentials once and for all?

On one level, the confusion around a moviestar's personhood can be understood, at least in broad terms: all of these performers create a mountain of staccato impressions of human personalities in role after role after role, roles which do not require them to physically stand in front of us (unless they're Daniel Radcliffe, naked on a stage; and yes, the internet got those pictures too).

Movie performances, particularly, are so structurally lightweight (even the deepest of them) that they not only invite, but are designed to invite, the audience to fill in all of the blanks and cracks with their own personal investment and desire.

And in the post-Paris Hilton internet, those cracks of investment and desire seem to have effectively short-circuited the inherent, uncomfortable pleasure principle that has always enclosed women in film. Celebrities, and female celebrities particularly, exist for a variety of reasons, but one is absolute: by dint of the medium itself, they are there to be looked at; and we, the audience, are there to do the looking.

And look at them, we do; we just used to have boundaries of how much of it we could actually accomplish before the lights would come up and we'd have to go home.

But suddenly, in the online world, there is no obvious bottom to the rabbit hole. The layers of protection have been completely stripped away; content is king. It's not a question of if there will be a celebrity sex tape; but when.

(Hollywood's response? Make a movie called Sex Tape, about how hilarious it is to lose control of your sex tape, and put spread-eagled-in-her-underwear Cameron Diaz on the posters, so that the genius graffiti artists of my hometown can inventively draw her labial slit in magic marker on every poster they can find, arriving at the heretofore-unimaginable artistic revelation that "YES, CAMERON DIAZ HAS A VAGINA.")

The internet's basic premise - all access to everything - requires stripping every single thing, including bodies, down to their component elements. All the layers have been peeled away. Women aren't merely naked; they aren't allowed to have pubic hair or outie labia any more, either. Celebrities aren't "allowed" to merely allure; they have to go all the way. Everything is stripped, all the way to the bottom.

And with each passing month, the fetishization of domination over these strangers' bodies continues to hyperextend to such a degree that we seem to be an hour away from peeling the flesh, too. I wouldn't put it past the gamer trolls: I'm sure they're already working on it. In 3-D CGI.

There is no stuffing the genie back into the bottle; get offline, shut down your Facebook account, it's all still going to be going on. And arguably, if you're the kind of person who is so morally disturbed by all this as to go ahead and try to limit the online clusterfuck's influence on your life, you're also the exact sort of community leader this Mad Max dystopia desperately needs.

See, I don't believe the human race is made up uniformly of useless criminals and assailants; I just think the angry and the bored make their way to the top of the noise list in every online environment we've created. (This week, I'm the angry. Here's hoping next week, I'll be the bored.)

Turning the internet into a shouting match isn't helping anything, either; but good heavens, those of us who have a problem with all this have to do a better job of steering the ship, by action if not word. Clickbait? Don't click it. Adam Baldwin? Unfollow him. Cyber-porn? Make your own. Your body, and your sexuality, are yours - and everyone else's is theirs. Leave them out of it and get on with your life.

Do you feel this content is inappropriate or infringes upon your rights? Click here to report it, or see our DMCA policy.
celebrity culturecolumndestroy all monstersfeature