Review: WE ARE MARI PEPA (SOMOS MARI PEPA), An Honest Portrait Of Youth With A Dose Of Punk Rock 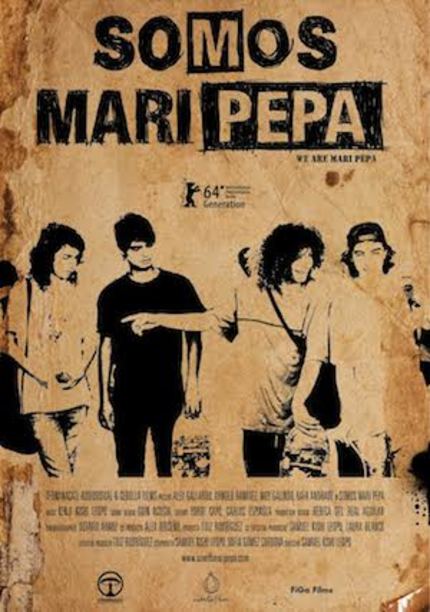 Mari Pepa is the name of a punk rock band in We Are Mari Pepa (Somos Mari Pepa), Samuel Isamu Kishi Leopo's extension of his own 18-minute short film Mari Pepa.

There's a funny nature attached to watching skinny teenagers playing music like that, fighting during rehearsals, or just having casual/vulgar conversations between them. We Are Mari Pepa functions as a really entertaining film for the most part, with a style that tries to recreate the home movie look. This is not a dirty/aggressive look at the punk rock world, but rather at those teenage days filled with more friends than chicks and the dream of becoming - in this case - rock stars.

While Kishi Leopo introduces a plot early on, dealing with the classic preparation for a battle of bands, We Are Mari Pepa ends up focusing on the little moments. Forget a finale with a big live performance a la School of Rock. It's all about realizing that your dreams and some strong friendships are fading away, that life might not be as easy and fun as creating a quick punk rock song. Work, love relationships, and even crime appear to make life hard for the band.

The portrait of teenage life is what the movie does best and, especially, anyone who has played in a band will find many familiar situations, getting some jokes that might not be as effective for those who weren't interested in playing music during high school. It is not difficult to realize that Kishi Leopo loves rock, with imagery of the Ramones and the Sex Pistols appearing in this representation of what it's like to grow up as a punk music aficionado in Jalisco, Mexico.

The movie is a little unfocused though, and at only 95 minutes still feels overlong. Choosing the band's guitarist as the central character, it doesn't achieve moments as strong/emotive as planned. I applaud the decision to avoid a (happy) clichéd conclusion, but at the same time, We Are Mari Pepa loses impact little by little. Still, I really suggest giving it a shot. It's, after all, one of the best Mexican films that I watched last year, as well as really fun and honest stuff, with male teenagers acting and talking like we all did back when we were young and not extremely clever!

Review originally published in a slightly different form during the Morelia International Film Festival in October 2013. The film starts an exclusive run at the Anthology Film Archives in New York City on Friday, August 15, and will be available digitally on Fandor.