Review: Football Doc WE COULD BE KING Tackles Big Issues 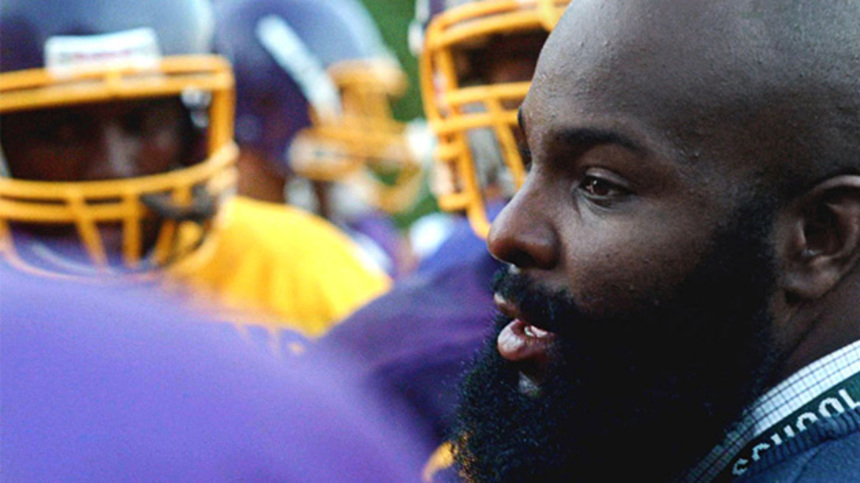 Sports docs are fickle things. Often they're little more than highlight reels, adding a bit of social drama in to make the story seem more relevant than just the drama tallied on the scoreboard. Yet when done right, the synergy between on-field competition and off-field struggle makes for truly compelling storylines.

The long shadow of the likes of Hoop Dreams falls over We Could Be King, and it's a testament to Director Judd Ehrlich and his team that the film at least strives for this type of penetrating and insightful filmmaking. Tackling the challenges when two rival Philadelphia schools are merged after severe budget cuts, the film traces the Cougars as they learn their oft-drilled mottos - humility, hunger - and bring these precepts to the fore in front of their divided fanbase.

The young coach Ed Dunn is a former teacher at the now shuttered school, and he volunteers his time to keep what he refers to as his "younger brothers" along the path to excellence. With an impressive beard and a perfect growl in his voice to rally his troops, it's Dunn's story that's perhaps the most affecting, as he feels upon his shoulders the need to be both guardian and guide through these challenging times for his students.

With a brisk 80-minute running time, the film still feels fairly substantive, raising if never fully delving into some of the more problematic questions that the story dances around. There are deep and fundamental issues at play here - how sport works within this predominantly African-American community to instill both pride and purpose in a way that the goals of education simply don't hold the same sway, how the vagaries of these qualifications may prevent even the most gifted of Athletes from ever reaching his dream -- and how the NCAA>NFL throughline is very different than, say, the High School > NBA draft, where academics simply is a non-factor.

Schools are meant to educate, of course, but the notion of how these cash-strapped institutions play far greater roles within this community is the setting for this story. While perhaps unfair to judge the film for what it's not, it's clear that it's often in relatively superficial ways that these elements are addressed. Moments of real challenge, for example, are often explained by simple title card, the filming for the most part concentrating on specific interviews or some well shot game footage.

There's a hugely powerful story at the core of the film, but where a doc like Undefeated managed to get under the skin of the issues address, We Could Be King remains at times at arm's length from the core element s behind the game, never quite getting its cleats dirty about the larger issues.

Still, the film is enjoyable and moving, with some colourful and memorable characters that are documented. The more fascinating story may be yet to come - any uplift from the finale is undermined in part when you dig into what the last year has shown for several of these players, including one of the film's main protagonists.

We Could Be King could be a truly great film, and I can't help but feel it's in some ways the beginning of a much larger project. Following the likes of Steve James, the film would be greatly improved by increasing the scope to more than a single season, following the programme as it develops over the next while, and trace just what affect the sport has on those when they're no longer under the Friday Night Lights.

The mix of hope and hesitancy is there right in the title - We Could Be King is a film about seeing the possibilities in individuals that may not be living up to their full potential - the same could be said about the documentary itself. This could be a truly great film, but in its present form, with its present scope, it feels like it's not quite reaching for the goal line. I strongly encourage Ehrlich and his team to stay with it the same tenacity that coach Dunn has demonstrated, as this is a story that's certainly in need of telling.

The film will be available to watch via various Video On Demand platforms beginning on Tuesday, August 12.