Review: DOCTOR WHO S8E02, INTO THE DALEK (Or, They Shrunk The Doctor And Put Him In A Dalek) 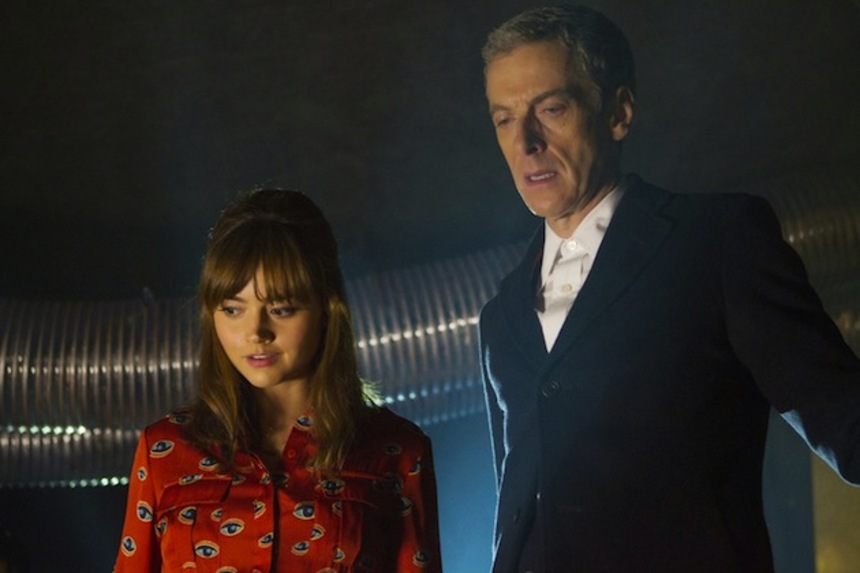 Regeneration episodes tend to be anomalies, so Peter Capaldi's second installment as the Doctor was always going to be more telling as to his take on the character. The good news, then, is that he remains brilliant. This Doctor is darker than the last, but he's also just the right mix of sarcastic, weary and hopeful that makes perfect sense for who the character is. His rapport with Clara is already more enjoyable than the dynamic she had with Matt Smith, where they were both taking a similarly hyperactive approach.

This episode has a simple premise and little explanation is needed. The Doctor finds himself saving a soldier (Zawe Ashton) who he later learns is fighting against the Daleks. Her comrades have captured a Dalek, and it rather confusingly appears to have got its moral compass all mixed up. To work out what's going on, the Doctor and Clara agree to be shrunk. They then take a trip inside the Dalek to determine why it doesn't seem quite so into the idea of exterminating everything. In some ways, it's all rather like "Journey to the Centre of the TARDIS", showing just how much Steven Moffat likes the idea of exploring the inner workings of long-standing elements of the show.

In this episode we also meet Danny Pink (Samuel Anderson), a love interest for Clara who teaches at the same school that she does. Doctor Who should be commended for its uncharacteristically patient handling of this introduction. As soon as we meet him, you expect him to somehow end up in the TARDIS, unexpectedly accompanying the Doctor and Clara on their adventure. The show holds off on that, though, giving us a few glimpses of who he is (a former soldier, who is shy and troubled) and leaving the inevitable shenanigans for later.

"Into the Dalek" finds the Doctor asking whether he's a good man, and getting the unsatisfactory "I don't know" from Clara in response. It's a surprisingly downbeat answer, but it works in the context of the episode. The Doctor believes he's good and tries his best to do the right thing, but when a Dalek looks into his memories and sees the conflict that has long waged between them, it can only see hate. That insistence that Daleks are all evil has clouded the Doctor's ability to see what could be achieved by saving them. It's here that we see the importance of Clara, who sees an entirely different situation than the Doctor when up against the Daleks. Her hopefulness rubs off on him, and in the end they make for a great team.

We also get small moments that are remarkably powerful, such as the soldier who decides to sacrifice herself for the possibility that the Doctor might be right. Is her death ultimately unnecessary? It's hard to say. But her hardened speech beforehand is a very well-worked emotional beat that is written and delivered convincingly. That it's followed by the appearance of the quirky Missy and her "heaven" is a little annoying. That material feels tacked on and doesn't have any relevance to the episode around it.

I remain cautious about the show's dark direction, but I think this episode is a strong example of how it can be dark and still entertaining. There's something great about Capaldi's abrasive Doctor, and his morbid humour ("Top layer. Do you want to say a few words?") isn't really something the series has played with much. He's soulful and means well, though, which is something Clara recognises at the end of the episode. There's a lot that works really well, here, as Doctor Who pulls off something rather ambitious and does so in an enjoyable manner.

Do you feel this content is inappropriate or infringes upon your rights? Click here to report it, or see our DMCA policy.
DalekDoctor WhoJenna ColemanPeter Capaldi