Destroy All Monsters: My Television Cost Money; Kindly Fill All Of It 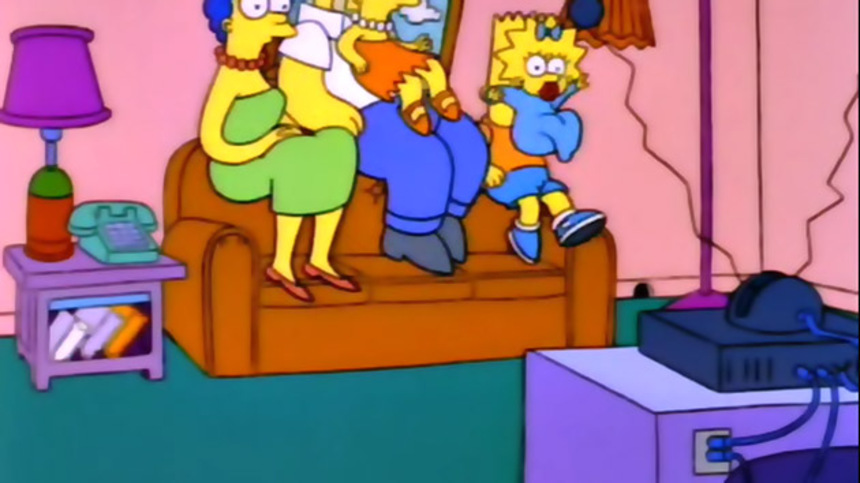 We return this week to a time where the purveyors of multimedia, en masse, evidently require some form of re-education on the concept of frame sizes. I lived through Frame War I, when every movie in existence was rapidly ported to VHS and other home screening formats, which required (for most movies shot after 1960, at least) that they have their "arms" chopped off - meaning the excision of the left and right sides of their rectangular frames, to fit the (then) square television sets.

Now we're onto Frame War II, where the televisions have kindly obliged the cinematic landscape by adopting a rectangular aspect ratio, and the laughably inevitable result now has various television channels chopping the "heads and feet" off the frames of any television series generated prior to 2001, because TV was square back then, and it isn't any more.

This week's "Every Simpsons Ever" marathon on FXX (wherein 70% of the frame of 100% of the episodes of The Simpsons are being screened to an irritated audience of purists) is a bracing reminder that in the current media landscape, content is just content, and aesthetic considerations need not apply. In a world where you can watch Avatar on your iPad while sitting by the window at Starbucks, perhaps we did this to ourselves.

(For my part, I've long held the "as originally intended" notion at arm's length when it comes to repackaging content in any form. The proper aspect ratio on my Lone Ranger blu-ray, for example, does not mean I'm seeing the film as originally intended, because The Lone Ranger was shot on film, and projected in movie theatres. Gore Verbinski and Bojan Bazelli might have an opinion on whether digital or analog projection was the "preferred" format for the film's theatrical presentation, but either way, the letterboxing on my blu-ray is far from the only concession that would need to be made to the notion of "as it was intended to be seen.")

For reasons I can't quite suss out, this week also saw a sudden resurgence of interest around Star Wars: Despecialized, a crowd-sourced restoration project for the original Star Wars trilogy that aims to create perfect high-definition copies of the original version of George Lucas' much-bastardized series.

The basic premise behind the project - that there is a prime version of the classic Star Wars films that deserve to be preserved (as closely as possible) for all time, even if it means doing so without their creator's explicit consent - comes from much the same place as the angst around 16x9 reformatting for television shows: that aesthetics matter, and that just because a medium's capabilities changed over time doesn't mean the original version, created with the original toolkit, becomes invalid.

This was always the real, lurking malfeasance (the phantom menace, if you will) behind George Lucas' self-imposed ban of the 1977 cut of Star Wars, rather than the ceaseless fan wailing about whether or not Han shot Greedo in cold blood. The simple question of changing aesthetics over time - i.e., the right to see something as it was made, not as it could be "improved" after the fact - has an enormous amount to say about the value we place on the history of our own pop culture.

The hostile reality of modern entertainment is this: no, older content doesn't bear up particularly well to new audiences who are unfamiliar with the contextual styles and rhythms of the time in which it was made. Purists can gnash their teeth all they want, but mass media wasn't created for purists.

But in spite of this market reality, pop culture does have a history and a legacy all its own that needs to be properly preserved so that the continuity can be studied and appreciated over time, even if it's just by "purists" - or more accurately, by people with a deeper interest in the material than just "meh, The Simpsons is on." Any art form becomes a dead art form when it ceases to be grist for cultural examination.

Can any copyright owner, though, be made to care in this day and age? What freaks me out about all this is that the group of people having this discussion - namely, us - is part of a demographic so microscopic that we essentially don't tally at all in the media corporations' assessment of what does and does not have value.

I think the Star Wars: Special Edition issue is possibly large enough that if Disney were to make the kindhearted and forward-thinking decision to release the unaltered original trilogy on blu-ray, fully restored and preserved as most major movie classics have been, enough people in the general population would understand what the hell the marketing was talking about that they might choose to re-up their blu-ray purchase of the series so as to have the version where Ewoks sing "Yub Nub" and not the other thing.

Anything else, though? A Simpsons marathon, 552 episodes long, pouring reformatted 16x9 content down a twelve-day pipeline that will be glanced at, occasionally, by a swath of viewers with some passing familiarity with The Simpsons over its 25 year history?

Forget it. If more than 1% of 1% of the people tuning in even noticed a difference, I'd be very much surprised.

The corporations are right: for the overwhelming majority of their consumers, content is just content. It's little more than the grease by which their great moneymaking engines run. From a basic pragmatic standpoint, it doesn't much matter what the content is, so long as there's enough of it to fill the pipe.

This is because for most of the people sucking on the pipe, the aesthetics that went into its creation are - at best - only meant to function on a subconscious level. Even on a show like The Simpsons, where frame-specific visual gags are supplying a steady portion of the jokes, the jokes that don't fire in 16x9 are more than made up for by the ones that do.

I'm not saying hopeless; I'm saying it has to be made economically relevant. Until then, for pristine presentation that pays attention to form, you want the cinematheque or the Criterion Collection. For content in general, "good enough" is more than good enough for more than enough of the good, general public.

Do you feel this content is inappropriate or infringes upon your rights? Click here to report it, or see our DMCA policy.
columnDestroy All MonstersfeatureMatt Browntelevision