Review: WAR STORY, A Devastating Study Of Conflict, From Within 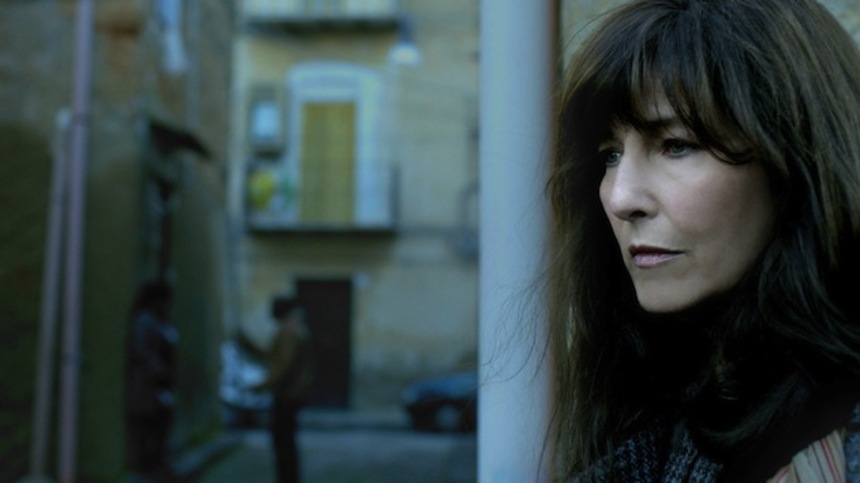 Mark Jackson did not so much as burst forth onto the independent film scene in 2011 with his brilliant first feature Without. Rather he made a careful set of imprints and impressions, distinct and measured, over the entire year on the international festival circuit.

I caught wind of this debut not too long after its premiere at Slamdance, intrigued by the images of Joslyn, a young woman distraught and nearly alone in a big house in the big woods -- nearly alone, for her only companion was a disabled old man she had to care for like an infant. A brilliant anti-cathartic piece of cinema on remorse and loss, Without became my favorite film of that year, and one that ranks for me amongst the strongest debuts of the last five years. With awards and critical praise aplenty it still baffles me as to why it never got a proper release.

Jackson's brilliance as a filmmaker came in his carefully measured unraveling and reveal of Joslyn: a victim as much as she is the victimizer. An unease; something inert and terrifying, hovering between the trees; that house, the girl, her fear. Without was a horror film sans killer, monster, or ghost. Except, they were all there too.

Much the same can be said of Jackson's sophomore effort, War Story, a study on post traumatic stress disorder which pulsates with the all consuming and ambivalent energy of a black hole. But that is merely scratching the surface. So if that is such, where to begin?

We begin by replacing the forest with a city. The house with a hotel. The broken girl with a woman, tattered and worn down by war.

Catherine Keener's Lee is a veteran photojournalist, seeking refuge in Sicily mere days after being released from captivity by a faction, and from a place, which will remain largely unknown... though perhaps, if we pay close attention, we will know the place as Libya.

A flurry of hands; flashes of cameras... voices... someone ushers a figure... Lee... to a car. She lacks sleep, a sense of time and place and self. Her nerves are shot. Her partner is dead.

Lee holds up in her room, sleeping off bouts of destructive behavior, constantly haunted and tortured by horrors we never see, but feel and feel and feel. Soon enough she begins to make her way out into the city, taking her camera along to the refugee camps that line its edges. There she encounters a young woman, Hafsia (Hafsia Herzi). Lee is convinced that she looks exactly like a young woman she has photographed before. A girl, a sister, weeping over her brother's bloody and broken body. Could this be her? The two women strike up a weary friendship. Lee is convinced they need to escape from Sicily, and if she can get a car, will Hafsia go with her? 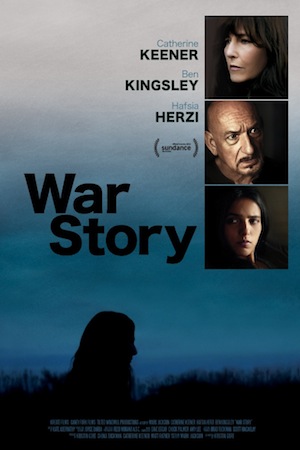 In her long and varied career, Keener has shown a knack for playing people stricken with guilt, are distraught, or just caught off-guard. Many of these performances, from the undeniably Kafka-esque Being John Malkovitch to the humanitarian satire of Please Give, have played in more or less comedic realms where she gets to bounce off a cast of others with abandon. It may seem as if Hafsia is that other for Lee. But I don't believe that to be the case, at least at first. Hafsia begins as the subject, a remnant, or rather a revenant of Lee's past. Here, the other is Lee herself, that void... a gaping hole too deep to know where the bleeding is coming from.

In this way War Story as a character study is not so much a look at what makes someone tick, but rather a study on the reassembling of a destroyed character, a mapping of the scars, of things that no longer work; a look into the trauma of being the true enigma. For the only identifying marker Lee has left of herself is her camera and what she sees through it, including Hafsia. As much as it is her vehicle to the outside world, it is also her shield, the element to have always kept her at a safe distance. Safe being a relative word of course in the world of a war photographer.

This displacement of time, of self, of space and place is palpably felt thanks to Jackson's commitment to narrative ambiguity, which may belie some viewers, but remains true to the emotional and psychological landscapes we find ourselves traversing with Lee.

Jackson steadily charts a path to breaking, framed by the melancholic winter-tinted lens of cinematographer Reed Morano, that is then tempo'd and tempered by Kate Abernathy's requiem-etched montage, and laced by the trembling music of Dave Eggar and Amy Lee. What we are witness to here is a nightmare illustrated in opaque tones. Realism inverted to abstraction. A place somewhere between self and death and life. A study on marginalization and discrimination without rhetoric.

War Story is also a film that is able to remain deeply personal, introverted, and minimalist in aesthetic, while also reaching for a scope that encompasses the blurring-line politics of our increasingly global society. Its strengths then lie in its ability to consistently contrast itself without losing sight of its vision.

If Without was the arrival of a distinct new voice in American cinema, a black and white portrait sketched beautifully and angrily in pencil, then War Story is an impressionistic landscape of emotions, colored brown and grey and black. It may not seem like an astronomical step up, but that's because it doesn't need to be. It is an astutely made step forward, confirming, strengthening and broadening the precise rhythms that Jackson had begun instrumenting in his first feature. With just two films under his belt we are starting to see reoccurring images and themes (mirrors, literal wounds from the past, fragmentation of time and space without becoming surreal).

The beauty and sadness of War Story is then in its willingness to be terrifying, and then its ability to be terrifying without actually raising your pulse, shouting in your ear with cacophonous music or making your eyes sting and bleed from jarring cuts. Or to put it another way, it is the way Jackson acknowledges the echoes of terrible events such as death and violence. He understands that theses echoes, these ripples, can be just as terrifying and incapacitating as the impact moment itself. If not more so. For what does a survivor have if not guilt. In some cases there is hope, but what Jackson and Keener remind us most is that fear and paranoia can often take hold first, and only along such thorny paths can we then reach a sense of hope. We may be weary, too weary to take hold of it, to cradle it and let it transform us. But it is there. Just on the other side of the lens.

This review was originally published in slightly different form during the Sundance Film Festival in January 2014. War Story releases theatrically in NYC, and is available on select US VOD services, July 30.

Do you feel this content is inappropriate or infringes upon your rights? Click here to report it, or see our DMCA policy.
ben kingsleyCatherine Keenermark jacksonptsdsundancewar photographywar story