Japan Cuts 2014 Review: MONSTERZ, In Which Nakata Hideo Misfires With A Lackluster Remake 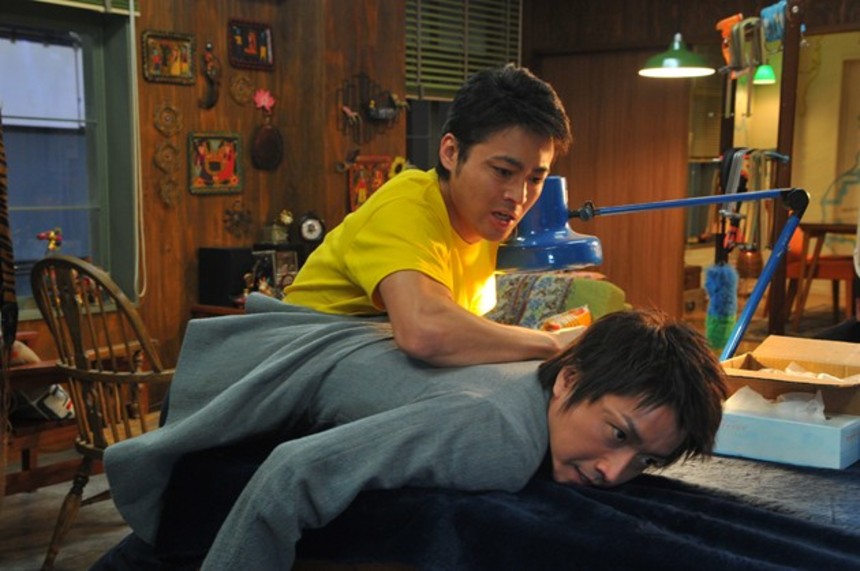 The slow but steady decline of the once-great Nakata Hideo (The Ring, Chaos, Dark Water) continues unabated with his latest, Monsterz.

This is a remake of Haunters, the 2010 Korean film by Kim Min-seok that itself was no classic, but had a goofy, shambling charm that almost overcame the profound preposterousness of its premise. Monsterz, then, on its face would seem to have not much reason for existing, and the end result more or less bears this out. Nakata ill-advisedly jettisons most of the humor of the original in favor of a mock-profound and deadly ponderous moodiness that seriously drags in its middle section before it picks up with an admittedly impressive finale, partly staged in an opera house. But by then, it's too little, too late to save this basically pointless exercise that starkly lays bare lapses of logic and narrative holes large enough to drive tractor-trailers through.
Monsterz begins on a rain-soaked day in 1993, with a harried and distressed mother (Kimura Tae), holding on tightly to her son, blindfolded and lame in one foot, as she takes him home. It's only when she is safely in the confines of her house that she takes off his blindfold. Soon after, the boy's enraged and abusive father (Miura Masaki) barrels in, roaring about how she's been raising a monster and that he should die, before savagely beating her. The boy stops the beating by fixing his gaze on his father, his brown eyes becoming a glowing blue, as he compels his father to walk out into the street and snap his own neck. At the complete end of her tether, the boy's mother tries to strangle him, but the boy escapes; instead of killing his mother too, he juts leaves her be.
Cut to twenty years later, and the boy has grown up to become a misanthropic loner (Fujiwara Tatsuya) who lives in isolation in an expensive hotel suite, funding his solitary lifestyle by robbing banks. His powers of control eliminate the need for a gun or even setting foot inside those places. He also enjoys going out to random places, freezing and manipulating people just for kicks, or controlling mass numbers of people in the office building opposite his hotel. He doesn't seem to derive much joy from doing this, however.
One day, as he freezes people in a park, he is confronted with something he has never had to face: someone immune to his powers. This would be moving/delivery man Shuichi (Yamada Takayuki), who continues to move around in bafflement as he sees everyone else frozen in their tracks. The controller - who isn't named, only called "The Man" in the credits - recognizes Shuichi immediately as a threat, and sends a speeding truck toward him in an effort to eliminate him.
However, Shuichi turns out to have superhuman powers of his own; he recovers extremely quickly from an accident that would have killed a normal human being. Unceremoniously fired from the moving company while in the hospital, Shuichi tracks down the driver of the truck that hit him. The driver, Shigeru (Taguchi Tomorowo), runs a small guitar repair shop with his daughter Kanae (Ishihara Satomi). Seeing that Shigeru is in no position to give him any substantial compensation for his accident and unemployment, Shuichi asks for a job at the shop instead. He's promptly hired, and a budding romance begins with Kanae. 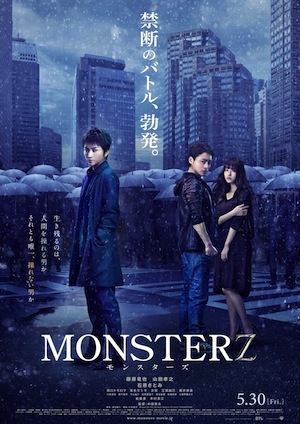 But The Man is now in steady pursuit of Shuichi, and still seeks to get rid of this man that he can't control. Thereafter, the film essentially becomes an extended chase scene, when after The Man begins wreaking havoc on Shuichi's existence, hurting and sometimes killing those around him, Shuichi reluctantly takes it upon himself to stop The Man in his tracks. Shuichi is sometimes accompanied by two bumbling sidekicks: Akira (Taiga), a tech nerd, and Jun (Ochiai Motoki), a flamboyantly gay guy. Later, two cops get into the action: veteran detective Shibamoto (Matsushige Yutaka), and his brainy female colleague Oshikiri (Fujii Mina). They all team up to figure out a way to counteract The Man's considerable powers, and to search for any weaknesses he may have.
Despite mostly faultless technical elements, especially Kawai Kenji's impressive classical-based score, Monsterz fails to improve upon its predecessor, and in fact makes changes that are considerably for the worse. One of the most interesting aspects of Haunters is that it is one of the rare Korean films - slowly growing in number - that acknowledges the reality of how Korea's demographics have been changing in recent years, especially with the growing presence of migrant workers. Haunters did this with its migrant worker characters, a Ghanaian and a Turkish man, who were the hero's sidekicks. These were well-acted, non-stereotypical characters who were useful to the hero, and who made you care about them.

Contrast this to what Monsterz offers for sidekick characters; these are people who serve no narrative function whatsoever, and are just there for comic relief. But the thing with comic relief is that it should actually be funny, and these two guys are most definitely not. The character of Jun is particularly offensive, as he exists for no other reason than to be ridiculed as gay. Jun prances around wearing lip gloss and tied-up half-shirts, blatantly ogling buff male bods. The film's producers should count themselves lucky that GLAAD doesn't have a Japanese branch; these are old-school gay stereotypes of the worst and most retrograde kind.
Monsterz ultimately suffers most from the problem of not taking its premise to truly imaginative places. There's only so many times you can see a guy freezing people in their tracks and using them as puppets before it becomes repetitious and rather boring. Also, the villain, both here and in the original, has strangely small ambitions for someone of his powers. One would think someone like that would go all the way and become the ultimate arch-villain, maybe controlling world leaders by day and bedding all the top actresses by night, for example. All of this, combined with not even the slightest attempt to explain the two antagonists' powers - Haunters can also be faulted for this - makes Monsterz seem even more of a low-rent X-Men retread than the original was.
As far as how the pairing of Fujiwara Tatsuya and Yamada Takayuki stacks up against the original's Kang Dong-won and Go Soo, I'd more or less call it a draw. These are all very good actors, and they do the best they can with what they're given. I'd give the Haunters guys the edge, though, just because the film they're in is so much more fun.
And no, I have no idea why the plural in the title has a "z" instead of an "s." To give it some hip-hop cred, maybe? If that's the case, then sorry to say, Mr. Nakata, no dice, buddy.
Monsterz, a co-presentation of Japan Cuts and New York Asian Film Festival, screens July 13, 3pm at Japan Society. For more information, visit Japan Society's website or NYAFF's website.
Tweet Post Submit

Do you feel this content is inappropriate or infringes upon your rights? Click here to report it, or see our DMCA policy.
Fujiwara TatsuyaJapan CutsJapan Cuts 2014MonsterzNakata HideoNYAFFNYAFF 2014Yamada Takayuki