Giveaway: Win A DVD Of Horror Flick HUNTING THE LEGEND 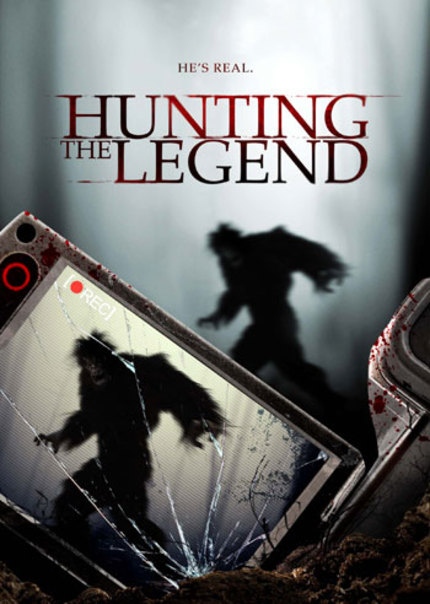 With the influx of found footage Bigfoot themed movies coming around (Bobcat Goldthwait's recent Willow Creek and Eduardo Sanchez's upcoming Exists) there is also the opportunity for new directors to make a name for themselves by staking a claim.
Justin Steeley is making his directorial debut with his own flick Hunting the Legend. We will have a review of his flick ready prior to its home video release date next Tuesday, July 8. In the meantime, we have three DVDs to give away before then.

Five years ago, a deer hunter vanished in the Alabama woods, leaving behind only a rifle, bloodstains and an enormous footprint from a species unknown to science. Now, the hunter's son Chris, his two best friends and a documentary film crew set out to learn the truth... and seek vengeance. Their search leads them deep into rugged terrain rumored to hide the huge, man-like beast known as Sasquatch. As they close in on their prey, they learn the horrifying consequences of Hunting the Legend.

Entering is easy. E-mail me your answer to my request below. Winners will be randomly drawn from all entrants after the holiday weekend, Monday July 7 at midnight EST. The contest is open to U.S. residents only.
So, bring me up to speed on Bigfoot lore. Bigfoot and Sasquatch are pretty well known. But tell me about another 'wildman' legend anywhere else in the World. The more exotic the better for me. Where else has a Bigfoot type creature been spotted (outside North America) and what do the locals call it? E-mail me your findings and you are entered into the giveaway.
Tweet Post Submit