Review: HELLION, The Devastating Sounds Of A Family Falling Apart

Dark, brooding, and testy, Jacob is a typical 13-year-old boy. He dreams of motocross racing. He looks after his younger brother. And he ignores his alcoholic father, who is prone to outbursts of anger as he struggles to raise his two boys after the loss of his wife and their mother.

Telling its story without demons or monsters, except those that arise from within, Kat Candler's absorbing drama Hellion exerts a quiet, compelling power. Far too often, the dynamics of a dysfunctional family are portrayed as commonplace in the current cinema, yet each domestic unit is composed of different and variable elements. Recognizing and respecting the disparity between families helps to distinguish Hellion from its dysfunctional brethren.

Really, it comes down to resilience under pressure, or how each remaining member of the Wilson household is holding up. Hollis (Aaron Paul) has broken completely apart, and is not having an easy time putting the pieces back together. He visits a roadside memorial to his wife, continues to work on their dream home on the Gulf Coast in Galveston, Texas, and drinks far too much beer. He's overwhelmed by his own unresolved grief and the responsibilities of caring for his rambunctious sons. He's held onto his job, so he can provide materially, but he appears in no way capable of supporting his boys emotionally at a time when they need it most.

Jacob (Josh Wiggins) lashs out blindly and sometimes maliciously, often in the company of his friends, fueled by his early-adolescent energies as well as his unspoken grief for his mother. He's also frustrated and angered by his father's inability to be a parent. Jacob is far from one-dimensional, however, as seen when he is dealing protectively with his 10-year-old brother Wes (Deke Garner). 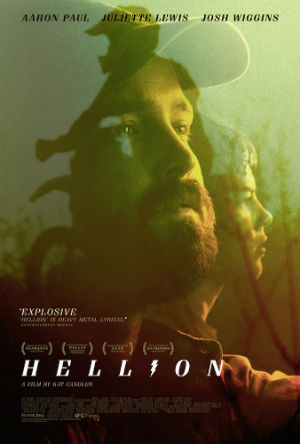 Complications arise when Pam (Juliette Lewis), Hollis' sister-in-law, decides she can no longer sit idly by while her nephews suffer. Her actions highlight the changes that Hollis needs to make, but, despite his evident mad love for his children, he is either unable or unwilling to make those adjustments a priority, leading to further complications that threaten to tear the family apart.

Young Josh Wiggins, making his feature debut, is disarmingly authentic in his performance, capturing the raw emotions of a character in turmoil. The even younger Deke Garner is charming without being cloying. As the highly-troubled father, Aaron Paul creates an indelible portrait in pain; he makes it apparent that Hollis' fractured personality existed long before his wife died. Juliette Lewis hits the right notes as a concerned family member; surely, she has suffered too from the loss of her sister, too, yet remains focused on the welfare of the boys.

Effective and engaging, the only thing that mars Hellion is a bewildering turn into wildly melodramatic territory that is out of character with the otherwise restrained yet still charged family character study. It's a jarring shift, but it doesn't diminish the measured, evocative drama that plays out up to that point.

The film is now playing theatrically in select cities in the U.S., and is also available to watch via various Video On Demand platforms. The theatrical release expands wider to other cities, including my current hometown of Dallas, Texas (at the Texas Theatre), on Friday, June 27. Visit the official site for more information.

Do you feel this content is inappropriate or infringes upon your rights? Click here to report it, or see our DMCA policy.
Aaron PaulJosh WigginsJuliette LewisKat Candler