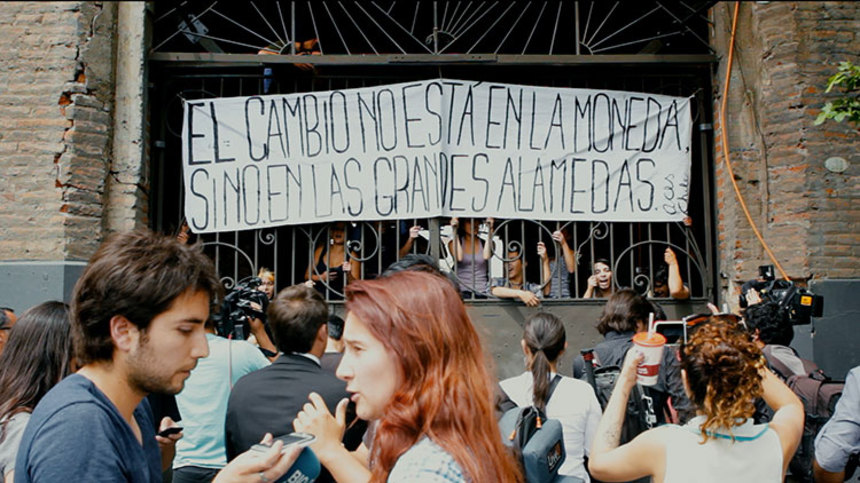 FIDOCS is one of the most important film festivals in Chile, as it's maybe one of the finest venues for documentaries from Chile and the world to be featured and seen in one week. Propaganda is a difficult film, due to its subject matter, the presidential election of last year in Chile, specially for people who are foreign to the technicalities of the whole endeavor, but I'll try to make some sense out of it. Propaganda is also one of the films in the Chilean Competition, whose winners will be known this Sunday.

I had the idea that this movie, out of all of them, would be harder to talk and write about to an english speaking audience, specially since it's so immersed in the goings of politics of this day and era, exclusively placed in Chile, in fact the movie chronicles the propaganda and elections of the latest presidential election, held last year, in a documentary and yet still distinct style and curious subject matter.

But the thing is that I could bit off my tongue and say that this documentary, mainly because of the way its shot and its subject matter, it's already been chosen for some big documentary film festival overseas, including this years FIDOCS, and maybe who knows how many more could enter, because it's a good film,made only better if you know closely the subject and the protagonists, but on its own it's still a compelling film, and that's the way I'll be looking at it right now in this review.


There are no camera movements in this documentary, the movement appears and is proposed by the elements inside the frame, whether they be the protests or violence of the masses trying to get something better than what they are offered, moving in perpendicular motion, or the  movement of the flames masks the movements behind it, making it a representation of a chaos that is never real nor completely irreversible.

Then there's the open spaces, then's when the movements become important, and that's because the elements in them are usually so slow and calm that they feel important in every twitch and turn that they make, the way that a destroyed poster floats at the rythm of the air in the north is one of the most beautiful images this film can conjure, how the figure seems abstract and completely devoid of its propagandist elements that it had one time, and it now the movement, thanks to the way that the shot unfolds in time, inside the frame manifests itself instead of being the main force behind the image or the framing.

The visual style and attitude is clear here, the camera is being analytical, almost as if it wants out of the whole "big carnival" of the media and propaganda that the presidential candidates find themselves into, the people answering questions or asking them when they are asked, or not, also becomes something that devoids the subject and the discourse of anything remotely political.

Most of the time the framing is perfect, totally encompasing the function of them, and there are others where the decissions are less fortunate, if not even downright terrible. There are a couple of shots that are practically unwatchable due to the fact that they are just way out of focus, and then there are some that are just plain mean when it comes to the moral issues that the movie presents, like the fact that the camera is positioned in such a way that it could spy on the vote that the people are making in a booth, which I found disgraceful.

Besides these couple of nitpicks, the morality of the movie is clear, if not somewhat muddled, that they feel that propaganda is a low form of communication, that there's some fun to be had at every aspect and element of all of the candidates, that no one is good and maybe everything is bad, and while that stance isn't something I particularly like or enjoy or even think that it comes close to what I think,

I still applaud that it's a documentary that gives an opinion on actual things that happened, instead of... just simply documenting them. I've said before that Chile is a great country for great documentaries, but there has been some kind of draught in this and the year before, as the movies that came out were not as spectacular as those that came in 2012 or before. This seems like the way to go, there's an exercise that seems to come from an online expression (Mafi.tv) but it also, in the form of a feature length film, it's still compelling and worth the price of admission.
Tweet Post Submit