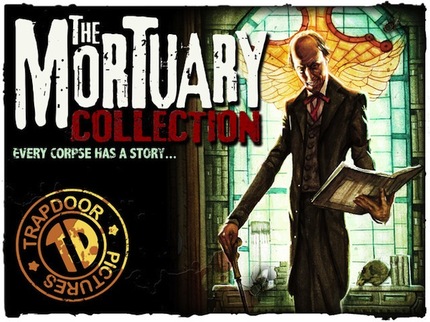 Ladies and gentlemen, here we have pretty much a no-brainer for Crowdfund This! at Twtich.

A horror project that promises to be both scary and fun? Check.

A project backed by some industry veterans and ScreenAnarchy favorites? Check.

A project with a killer, clever pitch video with some great production design and art work all its own? Check.

The Mortuary Collection is an anthology of horror tales from writer/director Ryan Spindell, producer Ben Hethcoat and Larry Fessenden's Glass Eye Pix, which have been involved in bringing to life such modern horror favorites as Stakeland and The House Of The Devil. Their Kickstarter spiel, roughly goes as thus:

An eccentric mortician spins four twisted tales of madness and the macabre in a sleepy New England town where nothing is as it seems... THE MORTUARY COLLECTION taps into four distinct horror sub-genres making it a virtual potpourri of horror favorites. There's a Monster Movie, a Slasher Film, a Ghost Story and a Psychological Tale of Madness...

The real deal maker for me here is writer/director Spindell. I first caught wind of the guy's work during Tribeca 2012 with the seriously fantastic short The Root Of The Problem. Spindell's deft, careful direction mixed with a freewheeling, crazy EC Comics-style story was the rare treat during an otherwise weak slate of shorts at the fest.

Their approach for The Mortuary Collection is very smart. The film is designed as a studio quality picture, but to be made at the fraction of the budget. The way they are doing this is by shooting each segment as its own short film. If they raise the initial seed money for the first segment, The Babysitter, then that should sell the next three.

The project is, thus far, doing well with $29,000 out of their $50,000, but it could still use some love over the next 18 days. So get a taste with the pitch video below and then head on over to their Kickstarter for a slew of beautifully macabre concept art, and to peek at their incentives which includes original art of you as a monster and a gory on-screen death appearance in the film.

Do you feel this content is inappropriate or infringes upon your rights? Click here to report it, or see our DMCA policy.
crowdfundglass eye pixhorrorkickstarterlarry fessendenryan spindellthe mortuary collection