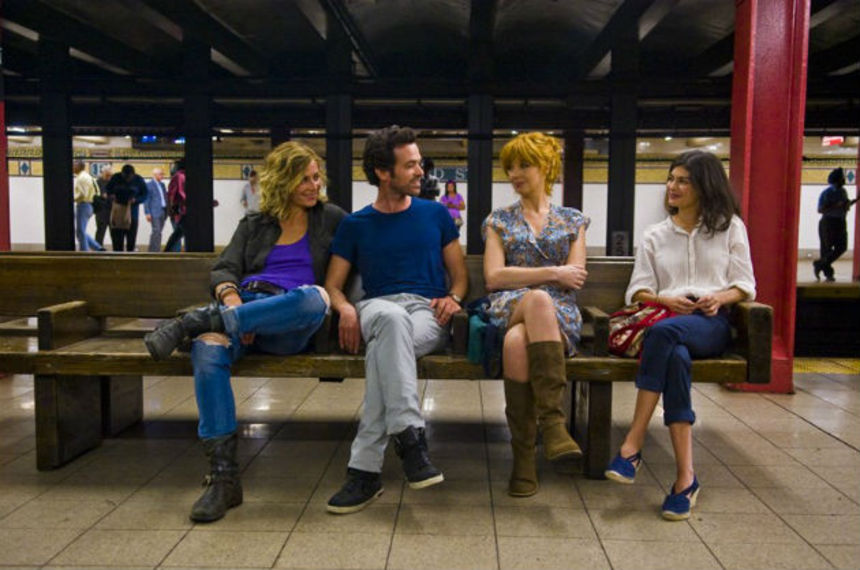 The path to true happiness is strewn with thorns, and hedged in by emotions and personalities that often spiral out of control. That appears to be the overriding theme of the three films that Cédric Klapisch has made revolving around Xavier Rousseau, a ladies' man who has evolved into a family man without quite realizing it.

The latest, Chinese Puzzle, is the strongest of them all. We first met Xavier (Romain Duris), Martine (Audrey Tautou), Isabelle (Cécile De France), and Wendy (Kelly Reilly) way back in L'Auburge Espagnole (aka The Spanish Apartment, 2002). Xavier and Martine were a couple; he was an economics student who moved to Barcelona for a year, where he met the others, part of a mélange of Europeans from different countries who overcame cultural differences to learn about themselves and each other. By the end of the movie, Xavier and Martine were no longer a couple, and Xavier quit economics to become a writer.

Picking up the story a few years later, Les Poupées russes (aka Russian Dolls, 2005) finds Xavier earning a living as a writer in Paris, but not a happy one; he is a romance novelist and ghostwriter for celebrities. He embarks on an affair with a model, and then develops an attraction for Wendy, who has become a successful TV writer in London. Are they meant to be together?

Chinese Puzzle (aka Casse-tête chinois) says no. After spending 10 happy years together, with two childen, things fall apart, and Wendy ends up taking the kids with her to New York, where she has fallen for a man whose character is defined by his wealth. Missing his children, Xavier follows, without much of a plan, beyond crashing with Isabelle, who now lives in Brooklyn with her partner Ju (Sandrine Holt). 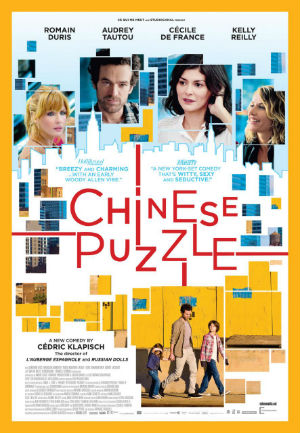 Many more complications ensue, some of them melodramatically eye-rolling, but most of them within the realm of possibility for 21st century families. As a former resident of New York City, and intensive viewer of movies set in the five boroughs, Xavier's fish-out of-water experiences as a Frenchman in America did not strike me as particularly fresh or funny, especially compared to his adventures in Europe.

But it's necessary for the story to document the grittier side of the city as a background for Xavier's evolving perspective. Barcelona seems like a distant playground in his youth; the sleek, ever more comfortable cityscapes of Paris and London that he previously enjoyed have faded in importance. As he nears 40, and finds himself even lower on the economic ladder than he did before -- NYC is wildly expensive, baby! -- he barely comments on his surroundings. Yet in light of his evident success as a novelist, he doesn't have the career worries that he did in the past; he knows he must write, and has the quiet confidence that comes from knowing that others appreciate his talents.

Those things, and even his own personal achievements, pale in comparison to his children. He makes no grand statement about this eye-opening, mature realization; the best he can do is wrestle with all the "complications" in his life, without quite seeing how it all fits together in the Chinese puzzle he's assembling.

Lest the movie sound like a long, rambling report, it's fleet of foot and quite absorbing. It functions best as the conclusion of a trilogy, with the backstory providing nourishment for the characters, but the genuine warmth of the emotions do not rely upon history. Most of all, Chinese Puzzle requires identification with and empathy for the characters, emotions that are well-earned and amply rewarded by the time the credits roll.

The film is now playing in New York and Los Angeles. It opens tomorrow (Friday, May 23), in my current hometown of Dallas as well as other U.S. cities. Visit the official site for more information.

Do you feel this content is inappropriate or infringes upon your rights? Click here to report it, or see our DMCA policy.
Audrey TautouCecile de FranceCedric KlapischKelly ReillyRomain Duris