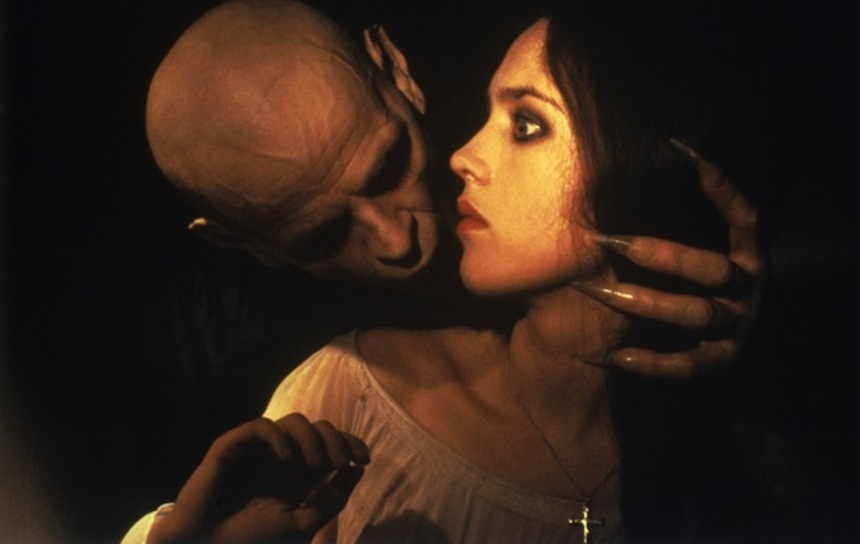 Werner Herzog's take on the infamous Nosferatu is one of those rare instances where the remake of a seminal cinematic work (in this case F.W. Murnau's in 1922) is equally as mesmerizing as the first go-around. What's more is that Herzog made two versions of his beguiling and expressionistic Nosferatu. With financial backing from 20th Century Fox and an international cast consisting of a pre-Possession Isabelle Adjani, a young (and nearly fully haired) Bruno Ganz and the unparalleled Klaus Kinski as the vampire, Herzog shot major passages of dialog first in English (to appease those cigar chomping fat cats) and then in German. The result are two slightly different versions: Nosferatu The Vampyre and Nosferatu: Phantom der Nacht.

So not only is The Cinefamily screening the film for a week (May 16 - 22) in a newly made 35mm print, it's the German language version of the film, which has rarely been shown on these shores, and in my opinion has the stronger performances from German natives Ganz and Kinski.

Sure, while you could go ahead and watch either version at home, how can one resist a Herzog classic on the big screen in 35mm. I was lucky enough to watch the film print at a screening last week and while it isn't in pristine condition, thanks to the varying quality of the original footage itself, it sure as hell is pretty... in the most Gothic sense, of course. And while opening night with Herzog in person is long sold out, who knows if the man will surprise the crowd on one of the other nights.

Get full deets on the run right here.

Herzog's NOSFERATU THE VAMPYRE (trailer) from Cinefamily on Vimeo.

Do you feel this content is inappropriate or infringes upon your rights? Click here to report it, or see our DMCA policy.
bruno ganzcinefamilyhorrorisabelle adjaniklaus kinskinosferatunosferatu: phantom der nachtvampireswerner herzog