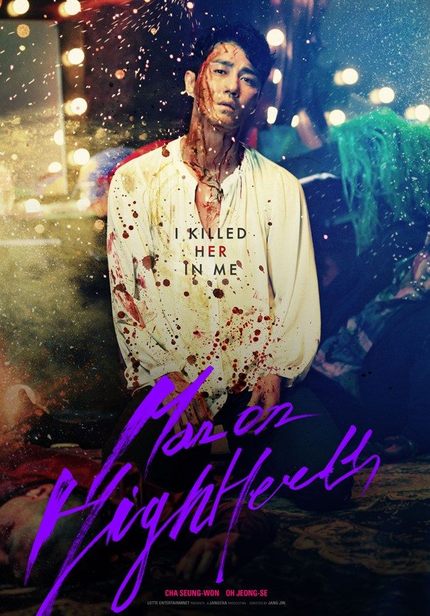 You'll be forgiven if you cringe a little when you first hear of director Jang Jin's upcoming Korean cop movie Man On High Heels, expecting from the title and the transgender aspect of the story that what is coming is a broad and tasteless comedy. It's not. Instead, judging from the first poster art and trailer, what Jang has delivered here is a gritty and stylish thriller that treats the gender identification of its lead character very seriously and looks all the better for it.

Ji-wook is a cold-blooded detective who would brutally assault and stop at nothing to catch criminals. However, despite his perfectly masculine appearance, Ji-wook struggles with a secret desire to be a woman. At last, Ji-wook decides to get a sex-change. However, a gang Ji-wook had brutally arrested by force plots revenge against him. While Ji-wook resigns and secretly dreams of transforming into a real woman, people close to him get caught up in a conspiracy... and killed. When the one person he must protect, 'Jang-mi', also falls in danger, Ji-wook faces a crossroads in making his choice.

Do you feel this content is inappropriate or infringes upon your rights? Click here to report it, or see our DMCA policy.
Actionkoreaman on high heelsthrillertrailertransgenderJin JangSeung-won ChaJeong-se OhEsomKil-kang AhnComedy

More about Man On High Heels