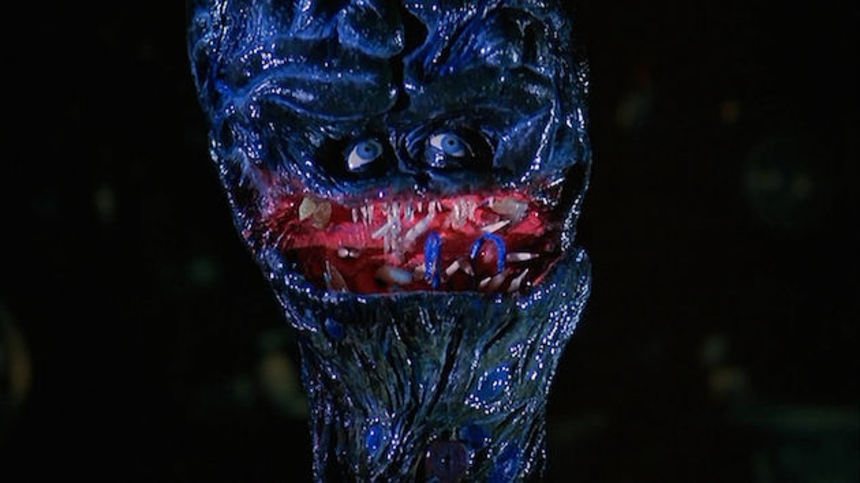 Fantaspoa programmed Frank Henenlotter's entire filmography in order to pay homage to this cult American director. Henenlotter himself was in Porto Alegre for a couple of days, presenting both Bad Biology and Brain Damage.

I attended the screening of the latter, which happened just hours before Henenlotter took a plane back home. "Just to have people coming to see an old film is meaningful", said the director. "But to see that people still like my films is just unbelievable", added Henenlotter while introducing Brain Damage to an always-cheerful Brazilian audience.

For someone like me who had never seen before Brain Damage, this introduction indicated we were in for a really fun time. "I see a lot of technical mistakes in the film but I think it really came out as something very unusual and odd and a lot of fun actually", were some of Henenlotter's words, and eventually the movie played fantastically. It's definitely one of those that should be enjoyed with an audience as the creature (pictured above) that causes some brain damage to our human protagonist delivers one hell of a crazy and fun time.

This little monster is named Aylmer and the film itself was almost titled after it. "The film was originally called Aylmer the Parasite", revealed Gabe Bartalos, the man who was responsible for the makeup effects. Bartalos has a long career as a makeup and special effects artist, while as a director he just did his second feature, Saint Bernard. Since Saint Bernard had its Latin American premiere at Fantaspoa, Bartalos was in town and of course he joined Henenlotter for the Brain Damage Q&A that followed the screening.

"Brain Damage was the first film I worked with Frank on and it was very exciting because I was a true fan of the first Basket Case", recalled Bartalos, who was never hesitant when it came to express his love and admiration for Henenlotter. He also shared information behind the conception of Aylmer and how that excitement of working with Frank also came from a strict makeup artist point of view. "It covered a spectrum of three: there was a creature construction, there were gore effects and there was the aging disease makeups. All three in one film was a very good palette."

The conversation between Henenlotter and Bartalos was never really about the actors, confirming Aylmer is definitely the main element of the film. The director himself first modeled the brain eater/cause of addiction Aylmer, and later brought Bartalos in to finish the job. "What a lot of people don't know is that Frank is a talented illustrator and designer. He had sculpted a model of Aylmer. What Frank was asking me to do was to take my sculpting skills and just take it a little further", said Bartalos.

In of the night's most memorable moments, Henenlottler spoke in Aylmer's voice, recalling that he had to do the same for the film itself. "The man who did the voice of Elmer (John Zacherle) is not credited in the film because it was a non-union film. In fact, I dubbed one of his lines. When we were editing I changed a line and needed him... let me see if I can do it: (in Elmer's voice) hey Brain, come in!"

Not every story shared was about the monster, though, and Henenlotter confessed he didn't know what he was doing during the shooting. "We had a crew who, like me, were youngsters without experience...we were all amateurs. Just to explain how green we all were: when the 35mm camera arrived there was no one on the crew that knew how to load it!" Henenlotter also admitted that he was very depressed once Brain Damage came out and failed horribly, both critically and commercially. "It was out of the theaters very quickly. It got really terrible, terrible reviews. The New York Post wrote that the man who made this film has no brains."

Like many other eighties movies, Brain Damage found its audience thanks to the video home market and that taught Henenlotter the biggest lesson of all. Rave reviews started to appear for the no-brainer turned "instant horror classic" Brain Damage. "To go from one extreme to the next is extraordinary", indicated Henenlotter before concluding with a smash: "Two years later, The New York Post reviewed Basket Case 2 and they liked it but said, as good as Basket Case 2 is, it doesn't match the horror highs of Henenlotter's classic Brain Damage. It's all lunacy!"