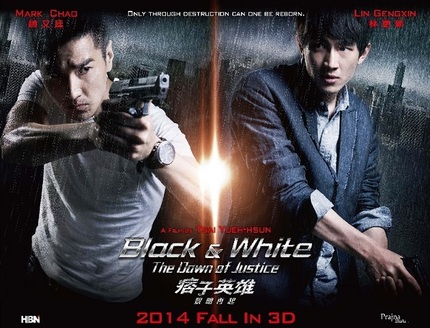 Big explosion and plenty of shoot'em up descended upon Harbor City yet again and its up to the cops to restore the peace in Tsai Yueh-hsun's Black & White Episode II: The Dawn of Justice, the second installment of the big-budget Taiwanese action franchise.

Mark Chao and Huang Bo returns to reprise their previous role as the unlikely duo while Lin Gengxin joins the main cast. As with most sequels, the action set-pieces and production value has ratchet up a notch with an international crew that includes France-based visual effects studio BUF (The Grandmaster), production designer Yoshi Akasuka (The Flowers of War) and second unit action direction by Jack Gill (Fast Five), Ron Yuan (Fast & Furious) and Lan Hai-Han (Ip Man 2)

Police officer in the Southern Precinct, WU Ying-xiong, has been revered as a hero in the Harbor City ever since he stopped the terrorists on a Boeing 777 airplane and kept the city safe. Unfortunately, the peace is only temporary...

Panic spreads the whole city as a series of bomb explosions happen within hours and this is just the beginning of a tight-knit conspiracy.

Righteous and impulsive, Wu is paired up with the intelligent but arrogant loner CHEN Zhen to track down the mastermind behind the bombing incidents. During the investigation, they find the clues are linked to a freeway kidnapping case. Worst of all, they find the next suicide bomber is XU Da-fu, a criminal who once helped Wu solve the airplane crisis and secretly ran away with his girlfriend Qiao-qing by faking death with Wu's assistance.

Soon Wu and Chen will discover that the bombings are just the prelude to a massive destruction. Stolen military missiles are now aimed at the Harbor City; moreover, a deadly virus is about to breakout, which is so highly contagious that it can devour the whole world in 14 days. All the chaos is planned by the Nightwalkers--a secret assassination squad which used to serve the highest government officials.

Facing the unprecedented crisis, the two-men team of totally opposite characteristics is the only hope to reverse the situation. Nonetheless, when moral standards are turned upside down, what faith should they keep to maintain the so-called justice?

Its currently in post production with the theatrical release date is set in October. You'll find the teaser and a production (both English sub included) video embedded below.

Do you feel this content is inappropriate or infringes upon your rights? Click here to report it, or see our DMCA policy.
actionBlack & White Episode II: The Dawn of Justice