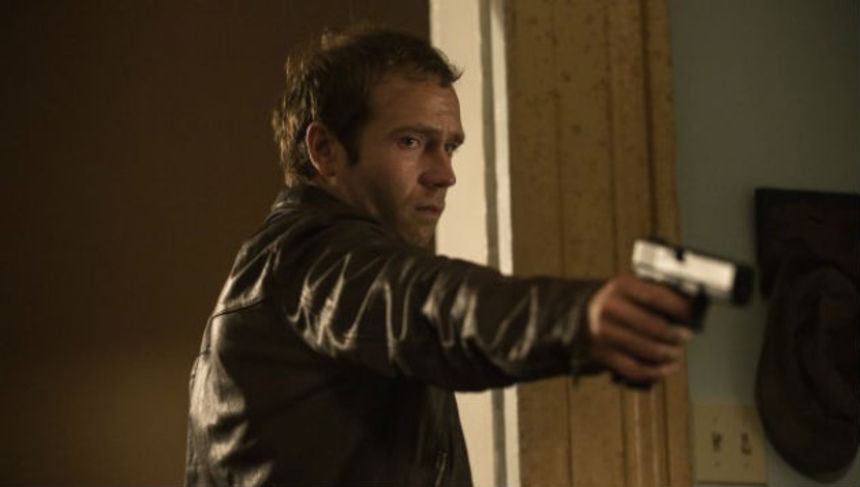 Nicely-demented, Daniel Stamm's 13 Sins functions best as a gruesome thriller with a sense of humor.

The deck is stacked quite heavily against Elliot (Mark Webber), a salesman who's preparing to marry his pregnant girlfriend Shelby (Rutina Wesley, from True Blood). Elliot is fired, cruelly and unexpectedly, by his arrogant, macho boss. That means Elliot will no longer be able to care financially for his mentally-disabled brother Tom (Devon Graye). To add to Elliot's financial and emotional woes, his bitter, racist father (Tom Bower) is about to be evicted from an assisted living facility. Elliot feels he has no choice but to move his Caucasian old man into the home he shares with Shelby, who is African-American, and his mentally-disabled brother.

Sitting alone in his car at a traffic light, glum and completely stressed-out, Elliot receives a phone call from a bright and cheery man who somehow knows all the depressing details of Elliot's personal life. He offers Elliot the opportunity to earn $1,000 instantly; all he has to do is kill a fly that's buzzing around the inside of his car.

Who wouldn't do that? It's so easy ... it sounds too good to be true. Mental alarm bells start ringing, but Elliot reacts instinctively and swats the fly. His phone buzzes -- his bank account has been credited with $1,000. His phone rings again -- he's now a contestant in a game that could result in an ultimate pay-off of $6.2 million. All he has to do is complete a series of 13 tasks, with an important proviso: don't tell anyone he's playing a game. Also, failure or refusal to complete any task results in the forfeiture of all winnings. Next up: eat the fly!

The game quickly escalates and becomes less about earning money to pay off debts -- ostensibly the carrot held out to Elliot -- and more about how far Elliot is willing to go to prove his manhood. This particular game relies on the odious premise that Elliot is too meek and mild-mannered for his own good; his boss sneers at him for not fighting back, his father criticizes him for his relationship with a black woman, and even his devoted girlfriend questions why he would put her in a position of dealing even more closely with that racist dad. 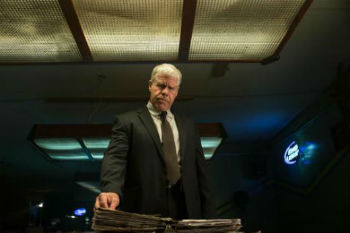 So, 13 Sins does not prize the qualities of kindness and/or self-control, and that becomes the basis for the game, as the anonymous, all-knowing voice on the phone goads Elliot to shake off the emotional restraints that have shackled him. Already pushed to the breaking point before the game begins, it's not very long before Elliot begins to embrace the idea of breaking the laws of gods and men. Mark Webber communicates this very well, with a menacing glint in his eyes and a straightening of his body language.

That draws the attention of a police detective (Ron Perlman), who takes on the case and becomes a lurking presence on the edges of the crime scenes that start popping up around New Orleans, Louisiana, where the story is set. Perlman injects a cynical vitality to the proceedings as a gruff loner with the experienced voice of command, which provides a counterpoint to the more dire game itself.

While 13 Sins is consistently engaging, its tone wavers unsteadily. The set-up is too heavy-handed to be taken seriously, especially the scene in which Elliot is fired, and the humor thereafter leans on sight gags. That suggests an altogether lighter approach to the material, which makes it more difficult to empathize with the depth of conflicting emotions that are supposedly raging in Elliot, not to mention the overarching story of the game itself, which is first suggested in a prologue. Ultimately these things weaken the dramatic impact of the picture; the tension doesn't ramp up sufficiently to earn the resolution that the story demands.

13 Sins is based on a 2006 Thai film by Chookiat Sakweerakul (reviewed here by ScreenAnarchy's Todd Brown), known as 13 Beloved and/or 13: Game of Death. I haven't seen that film, so I can't compare it with the new version, but I can say that 13 Sins delivers a fair amount of blood -- without the violence becoming extreme or very explicit -- along with its thrills, even though its thematic ambition exceeds its grasp.

Review originally published during the SXSW Film Festival in March 2014. The film is now available to watch via various Video On Demand platforms. It opens in select theaters in the U.S. on Friday, April 18. Visit the official site for more information.