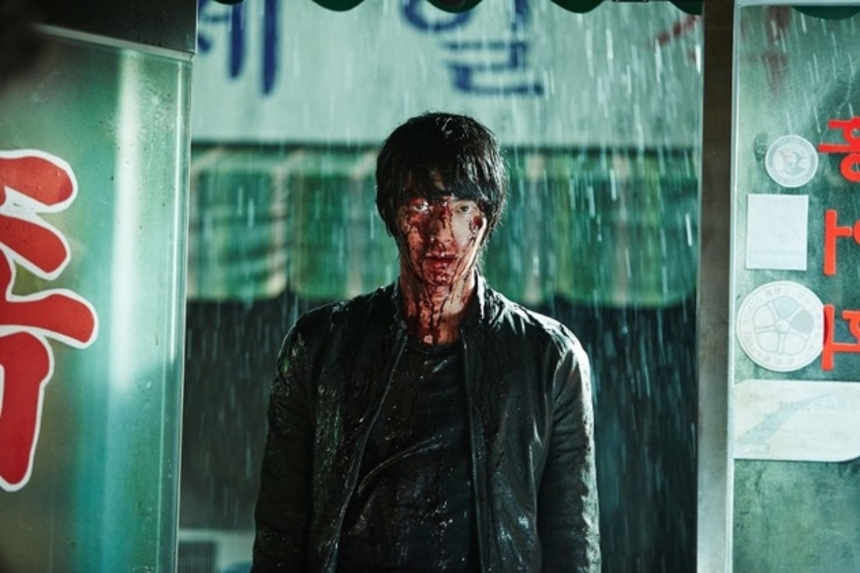 Ingenue Kim Go-eun gets her first top billing in director Hwang In-ho's uneven and sadistic revenge thriller Monster. Exhibiting the same irreverence towards genre as in his previous film Spellbound (2011) but with none of the panache, Hwang fails to keep things on track with a slow to start narrative, a young star out of her depth and a disturbing streak of misogyny.

Bok-soon operates a small vegetable stand in the countryside. Not the sharpest knife in the drawer, she is prone to fits of anger when people rub her the wrong way. She lives with her younger sister who is kidnapped and killed by the cold-blooded Tae-soo, who commits the deed to cover his tracks for another slaying. Setting out to avenge her sister, Bok-soon goes on the hunt for Tae-soo, but he too is trying to find her.

Brutality against women is not hard to find in Korean cinema. Whether as a reflection of Korean society's still patriarchal nature or as fodder in genre material, it's an inevitable element of many Korean films. Director Hwang, lacing his latest with gratuitous violence, falls in the latter camp. Unlike local films that have attempted to out the oft-times despicable treatment of women in Korea, Hwang's film, for its wanton, sustained and unnecessary depiction of violence, seems surprisingly cruel towards the female body. The worst instance comes at the end, in a savage, blood-soaked finale that goes way beyond the pale.

The story is a pretty simple one, pitting a grieving family member against a remorseless killer. Yet, though the film's marketing suggests the narrative is a standoff between the two leads, with the tagline 'Murderer vs. Crazy Girl' (the latter a reductive and unflattering reference to Bok-soon), Monster takes a terribly long time to get started with a set up that is less build up than weary exposition. Much of this early drag is a result of Hwang's heavy-handed mashing of genres and tones. This tactic served him well in Spellbound but here his machinations seem almost schizophrenic. A handful of scenes are very effective, such as a brief attic-set flashback to Tae-soo's horrific childhood or a group of thugs demonstrating which instrument would be best served to dispatch their target, but these are lost within Monster's fragmentary melee of a narrative.

After her breakout performance in Eungyo (2012), young star Kim Go-eun has experienced a swift rise both at home and abroad. In Monster, her second feature, her character and performance share nothing in common with her debut. However, for all the attempts to show off her range and position as an exciting new actress on the Korean scene, Kim's latest turn hits all the wrong marks. She makes a valiant stab at a frustratingly over-caricatured yet threadbare character but her physical and manic performance quickly becomes exhausting.

Lee Min-ki, the affable lead of Spellbound who acquitted himself well in last year's Very Ordinary Couple, is tattooed and shredded as the icy Tae-soo, but his malevolent smiles, good looks and sophisticated gait, accessorized by a fancy, modern home in the countryside and his affinity for wine, add up to a wearily familiar performance. It echoes the many emotionless and cool villains in Korean cinema that tend to be played by young idols. Lee has proven that he can do better, so this dull turn does him no favors in his growth as an actor.

Kim Roi-ha, who you may recognize as the violent detective who injures his leg in Memories of Murder (2003), is given a less affected character and while his down to earth persona was likely designed to contrast with Tae-soo, his solid performance only serves to make the leads look silly. Also impressing in a small comic role is Bae Sung-woo (Way Back Home) as one of Kim's henchman.

With its strong stylistic overtones and willingness to experiment, Hwang's film is more of a disappointment than an outright failure as one can plainly see that he's capable of better, which he will surely deliver again in the future. But the one thing I can't let the film off the hook for is its cruelty towards young woman. The violence is not spurred on by a social agenda and its persistence is disturbing. At first a clunky misfire but ultimately an unpleasant creation, Monster leaves a bitter aftertaste, with little to show for it.

Do you feel this content is inappropriate or infringes upon your rights? Click here to report it, or see our DMCA policy.
2013hwang in-hokim go-eunkoreakorean filmlee min-kiMonsterrevenge thriller몬스토