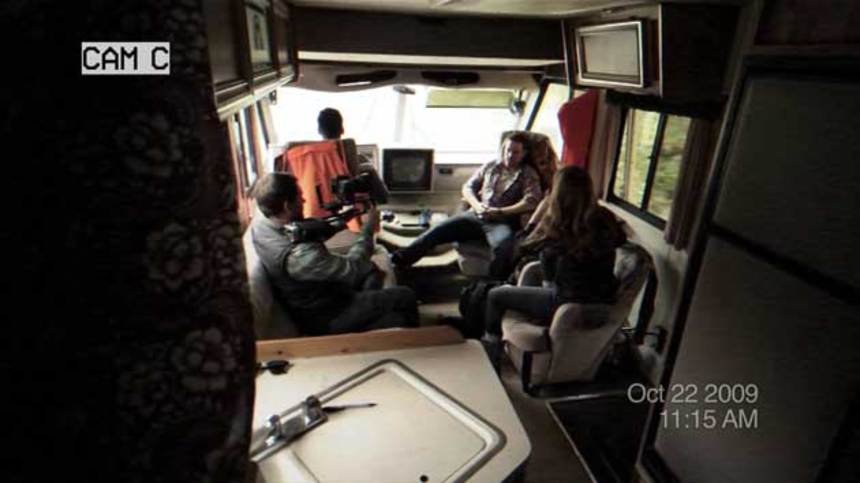 First time writer-director Josh Anthony's Happy Camp indulges in all the worst elements of the found footage genre to such an extent that for the first half of the mercifully brief film, I thought it was heading toward some clever subversion of 20-somethings searching for something in the wilderness only to come to a sticky end as the audience is underwhelmed.

You wouldn't think that Klamath National Forest, where Happy Camp is set, is even in northern California. The sun never seems to break through the autumnal tree cover and its residents - each and every one a little hostile and terrified as hell - would rather visitors not come in, poking around and asking questions about the 600-odd souls who have disappeared in the area under mysterious circumstances.

For a moment, Happy Camp holds our curiosity - what's out in the woods snatching people up and why can't Michael (Michael Barbuto) remember what happened 20 years ago when his little brother was abducted in broad daylight in their backyard?

Michael, with camera crew in tow, never really give us an answer to why the handful of wild-eyed residents choose to stick around the small town of Happy Camp, or even really connect them to the mystery. Even Michael's part in the story is poorly-sketched: his behavior becomes increasingly erratic, allowing us plenty of time to hear him be yelled at by his girlfriend Anne (Anne Taylor), and two-man production crew (Teddy Gilmore and Josh Anthony).

Michael is never a person, just a collection of outbursts and lost time, a mystery that gets solved with a shrug in the final act. Ditto his friends, who come in two modes: obnoxious pranks fueled by drinking and anger at Michael for wandering away from their beat-up RV. Only Anne, as Michael's girlfriend, seems to have a little more nuance to her, concerned about what impact this is all having on Michael, but Josh and Tom are broadly-sketched "bro-y camera dude #1" and "#2." We have no reason to care if they live or die (although, again, by the end, you're leaning a little toward the latter).

It's not just that Happy Camp feels like a return to Burkitsville with one more person in tow, or that by the 45-minute mark, you're praying that whatever is waiting in the woods will come and kill our cast so we can all move on. I mean, it is those things that makes Happy Camp bad, but what makes it unbearable is how utterly out of left field and unrewarding it ends up being, lost ultimately in a blur of awkward CG and the usual bad-things-happening-on-grainy-video.

It lacks the elaborate weirdness of Grave Encounters or the kitchen sink approach of the increasingly silly but watchable Paranormal Activity series, and even the movie from which it most directly lifts had the good sense to make the woods an ominous space, allowing the silence and bleakness to set in rather than have a parade of toothless yokels tell aimless yarns about how much danger our leads are in.

If it's not clear, Happy Camp is a lifeless, figuratively bloodless and literally aimless horror movie. My only hope is that it provides a nice warning to future indie filmmakers looking to mine the nearly bankrupt found footage genre.

Happy Camp is now available on VOD and digitally from Gravitas Ventures.

Do you feel this content is inappropriate or infringes upon your rights? Click here to report it, or see our DMCA policy.
Anne Taylorfound footageJosh AnthonyMichael Barbuto