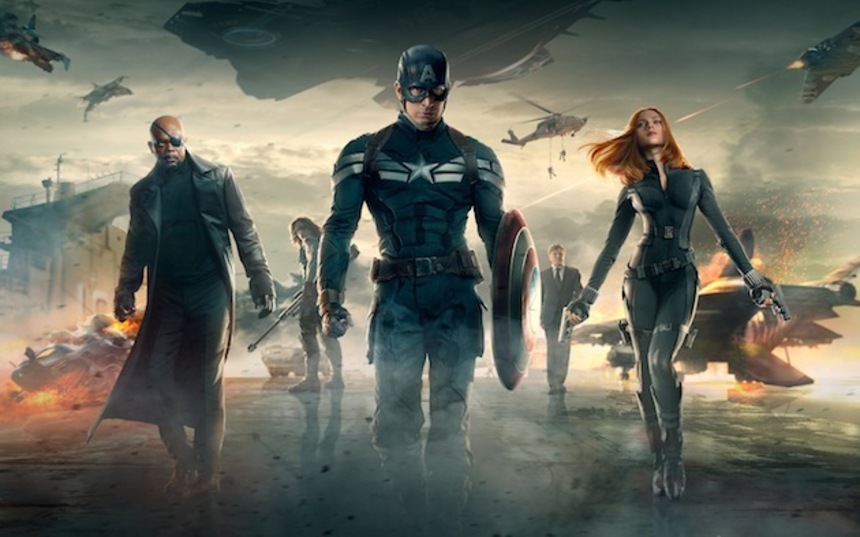 "How do we know the good guys from the bad guys?," Anthony Mackie's Falcon (real name: Sam Wilson) asks in the midst of the climax to Captain America: The Winter Soldier. It's a line that is played for laughs and is followed by a quip from Cap (Chris Evans) himself, but it points to a theme that rings true in the story told here. Marvel's latest is big on moral ambiguity, challenging each of its characters to look inwards and consider whether they're doing the right or the wrong thing.

I appreciate how the film doesn't have any easy answers to the questions it poses too, as it embraces the complexity of the positions that Captain America and Black Widow (Scarlett Johansson) find themselves in by working for S.H.I.E.L.D. The shadowy government agency is one that deserves exploring in Marvel's films and, while The Avengers suggests it may be more nefarious than expected, it is just one of that film's numerous storylines. The Winter Soldier tackles this notion with gusto, taking us deep into the inner workings of the organisation to put a spotlight on mysteries within.

The story of Captain America: The Winter Soldier essentially follows Cap and Black Widow as they uncover secrets held by S.H.I.E.L.D. and try to learn more about what their superiors are hiding. S.H.I.E.L.D. is about to launch a preemptive defence system using helicarriers that can target and eliminate potential threats before they act, a suggestion that leads to Cap accusing Nick Fury (Samuel L Jackson) of creating a world without freedom.

While the film is doing all this, it also has to tell the story of the titular Winter Soldier, introduce plenty of new characters and deliver the expected amount of fighting and explosions. There's more too, because the narrative simultaneously expands and compartmentalises the Marvel cinematic universe, both relating it to past films (most obviously Captain America: The First Avenger, but also The Avengers and the other Phase 1 films) and providing a ton of foreshadowing for future movies.

There's so much it's trying to get through that it should come as no surprise to hear there is simply too much story here to be told in one film. A less stable franchise might try to cram it all in regardless, but The Winter Soldier wisely chooses to tell the stories that it can without losing its edge. Because of this, there is far more about the conspiracy side of things than there is about the Winter Soldier. Thankfully, the plotting is tight and it makes for an exhilarating watch. It may be a stretch to call it focused (I'm not sure any of Marvel's films are) but it's certainly driven. And, while it's lengthy (with a running time of 136 minutes), it never feels boring.

Like The Avengers, it handles its sizeable cast by giving everybody something to do that contributes to the main plot. Evans and Johansson easily get the most to do, with Robert Redford adding intrigue and tremendous presence through his character Alexander Pierce. Because The Avengers had to rush some things, we get a lot valuable character detail here for both Steve and Natasha.

The insight into how Cap is adapting to the present is very worthwhile, as is getting to see him interact with others in more depth. Because Widow is enigmatic by design, I'm not sure I expected to learn too much about her; however, what we do get is a greater look into who she is and what she's fighting for, so I do feel like I know more about what makes the character tick after this film.

Jackson and Cobie Smulders return to reprise their roles as Nick Fury and Maria Hill respectively, and Mackie is brought onboard as The Falcon. This is a less obviously funny film than either Iron Man 3 or Thor: The Dark World, with many of the actors approaching the more serious material in a sombre way. It's not humourless, though, especially when it comes to some of the great lines given to Fury. The Winter Soldier, while pushing its mystery and complexity, does still have that lighthearted tone that Marvel seems to have perfected.

The performances are perfectly pitched across the board. As mentioned, Redford is terrific. Evans continues to make his noble hero a guy you can't help but root for and Johansson builds on her Avengers performance to give Natasha more personality. Sebastian Stan's turn as the Winter Soldier is also exceptional, with the actor clearly raising his game to convey as much as he can about his character with as little expression as possible. Just using his eyes and a limited amount of dialogue, he makes the character's journey feel real. Because the acting is strong and the characters are interesting, though, you'll leave wishing there had been more of certain figures - I would've certainly welcomed more material for Fury, Hill, and Agent 13 (Emily VanCamp).

The onscreen Marvel universe is continually expanding, and this just furthers its growth. There's a lot of connective tissue between this and The First Avenger (a film I really love... maybe its importance to note here that this one will make people appreciate what it achieves a bit more), while the references to other characters and stories don't feel as shoehorned in and are able to flow more naturally. Obviously, there's a lot of foreshadowing too, both for the next Avengers film and Captain America 3, it's also worth noting that there are two post-credits scenes on this one.

A trend for many of the Marvel films so far has been to have each new director clearly put their voice into the film. I don't feel that's quite as obvious here, although that might be because I don't have as much of an expectation of directorial style when it comes to Joe and Anthony Russo as I do with Joss Whedon or Shane Black. In any case, The Winter Soldier is written with a great deal of tension and presented with skill. There's a breathless energy to the action sequences and the film makes great use of its Washington setting.

More than just a solid conspiracy thriller, though, this film demonstrates how assured Marvel's grasp of its characters is and how prepared the studio is to take risks. Much has been written about how Marvel has a formula and how their films are rarely able to surprise (save for a Mandarin twist here or there) but I think the events of The Winter Soldier might have some thinking differently. Some key areas of Marvel's world building are complete, giving it freedom to break the formula and push the characters further and harder. This film is a great example of that, as it challenges its characters with complex moral dilemmas, committed enemies and compelling mysteries.