Review: ABOUT LAST NIGHT, Halfway Transformed By Kevin Hart Into A Raucous Comedy 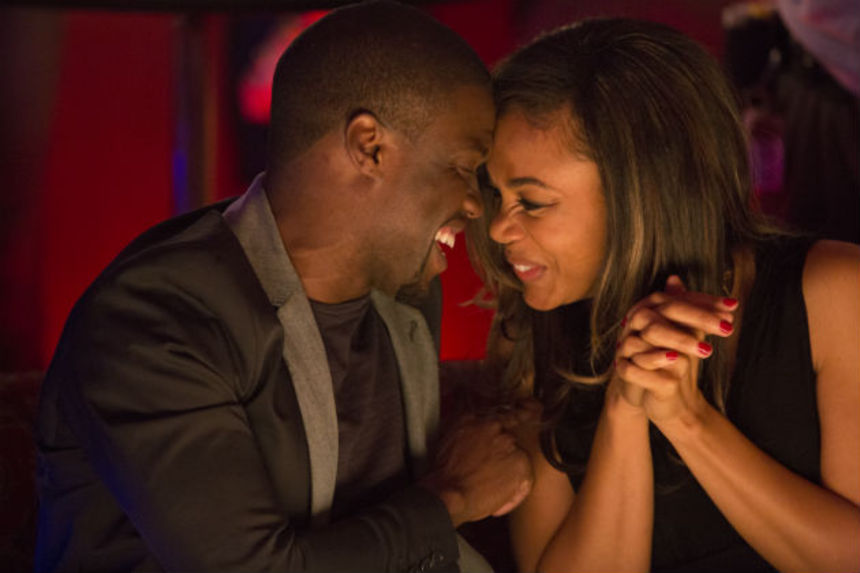 Kevin Hart is a profane, raunchy, and very successful stand-up comedian who broke big with his indie film Laugh At My Pain in 2011. Combining footage from an arena show in Los Angeles with a visit to Hart's hometown of Philadelphia, as well as a sketch parody of Reservoir Dogs, the film made a modest yet impressive amount of money at the box office.

Since then, his profile has risen dramatically. He co-starred in the sleeper hit romantic comedy Think Like a Man in 2012, and in the past year has appeared in This Is the End, Grudge Match, and his second concert documentary, Kevin Hart: Let Me Explain, which was a much bigger hit than his first, not to mention last month's Ride Along, the first box office hit of the new year, despite being slammed by critics, including our own Jim Tudor.

All this to say that his presence as Bernie in a new version of About Last Night changes the dynamic of the story significantly. David Mamet's one-act play, Sexual Perversity in Chicago, first produced in 1974, helped establish the playwright as a caustic reporter on the war between men and women. The 1986 film version, written by Tim Kazurinsky and Denise DeClue and directed by Edward Zwick, softened the edges, turning it into a sweet romance that banked on the physical charms and sexual heat of Rob Lowe (as Dan) and Demi Moore (as Debbie) as a young couple navigating a new relationship while their best friends Jim Belushi (as Bernie) and Elizabeth Perkins (as Joan) provided sour commentary and active, bitter discouragement.

Leslye Headland (Bachelorette) penned the new version, restoring profanities and upping the raunch factor, which is directed by Steve Pink with all the subtlety he demonstrated in Hot Tub Time Machine, which is to say not very much at all. The 2014 edition makes a fundamental change in the story by first pairing up Bernie (Kevin Hart) and Joan (Regina Hall) as a couple. This plays right into Hart's strengths as a boisterous performer, and Hall turns her volume up to 11 as well, allowing them to turn their sexual encounters into frenetic, funny encounters that put the emphasis on awkwardness and sheer abandon. 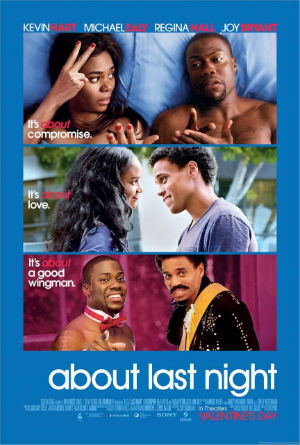 Hart and Hall's comic antics serve as effective counterpoint to the quickly-blooming relationship between Danny (Michael Ealy) and Debbie (Joy Bryant), who display sensual chemistry while never going as bare as Lowe and Moore did nearly 30 years ago. By veering away from the dynamics of the 1986 version, the 2014 edition flies at high speed down a mountain road; Hart and Hill generate laughs, while Ealy and Bryant look dreamy-eyed in a series of romantic montages.

But then the film comes to a hairpin turn into dramatic territory and misses it entirely, zooming off a cliff into an uncomfortable free-fall. As they've demonstrated elsewhere, Ealy and Bryant are capable actors, and they do their best to sell their newfound responsibility to carry the plot forward. The characters played by Hart and Hall drop away into the background, and though they eventually return to salvage some laughs, the film has been fatally wounded.

The first half of the film, however, works like gangbusters, transformed by Kevin Hart's presence and personality into a raucous comedy, ridiculing the more ridiculous aspects of modern mating rituals. The comedy relies almost entirely on low-brow humor and sight gags, which obviously will not be to everyone's taste. Without that comedy as gas, the film quickly stalls.

I've watched the 1986 film more times than I dare count, somehow always falling prey to the soft-focus prettiness of Lowe and Moore, and the idealized nature of their sexual encounters and early-relationship bliss. The sour bitterness of their supposed friends (Belushi and Perkins) were always a drag to endure, providing zero insight in the screen version.

In contrast, the first half of the 2014 About Last Night plays much lighter and funnier before vaporizing almost entirely under the dramatic strain. The film takes liberties with its source material anyway, so I wonder why the filmmakers bothered to keep the drama instead of transforming the story entirely into a balls-out comedy.

The film opens wide in theaters across North America on Friday, February 14.