Now On DVD: FROM ABOVE, A Romance That Wants To Be A Tearjerker 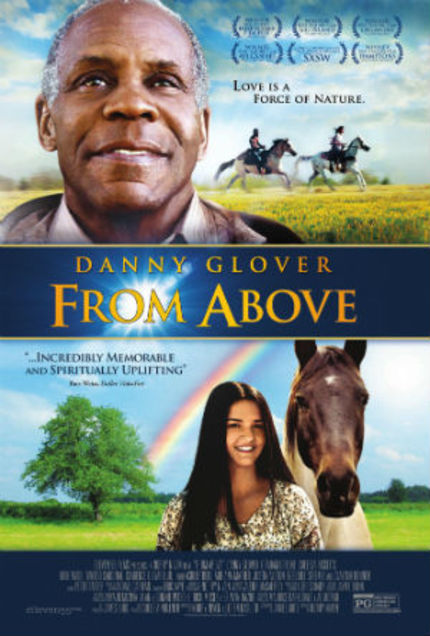 Danny Glover toplines the cast of From Above (formerly titled Chasing Shakespeare), a romantic drama with a twist that aims to jerk tears. After playing the festival circuit, the film arrives on home video today.

When it played at the African Diaspora International Film Festival in November 2013, our own Christopher Bourne had this to say:


As per the title, the Bard's plays and poetry make superficial appearances in this maudlin would-be tearjerker, which opens this year's festival. [The film begins] with a scene in a torrential, lightning-filled rainstorm in which William Ward (Danny Glover) bids a teary goodbye to his dying wife Venus (Tantoo Cardinal).

William deals with the aftermath of his wife's death as awkward flashbacks are interspersed, showing us how the younger William and Venus met, and the early days of their relationship. William meets Venus when she unsuccessfully auditions for the role of Juliet in a high school production. Her performance brings everyone in the room to tears, but as a Native American, she unfortunately isn't white enough for the part. William and Venus' romance blossoms and endures despite the myriad tragedies and challenges they must endure.

There is a mystical element added here; Venus' clan has a special relationship to lightning, and she is still able to commune with William after she dies. Danny Glover and Graham Greene (as Venus' dad) do their best to class up this material, but unfortunately their efforts are sunk by an inept script and some fairly cheesy visual effects.
Mike Wade and Chelsea Ricketts play the couple in their younger days; Norry Niven directed.

The film is available today, February 4, on DVD and also via various Video On Demand platforms. Visit the official site for more information.

From Above Trailer from Chasing Shakespeare on Vimeo.

Do you feel this content is inappropriate or infringes upon your rights? Click here to report it, or see our DMCA policy.
Chelsea RickettsDanny GloverGraham GreeneMike WadeNorry Niven