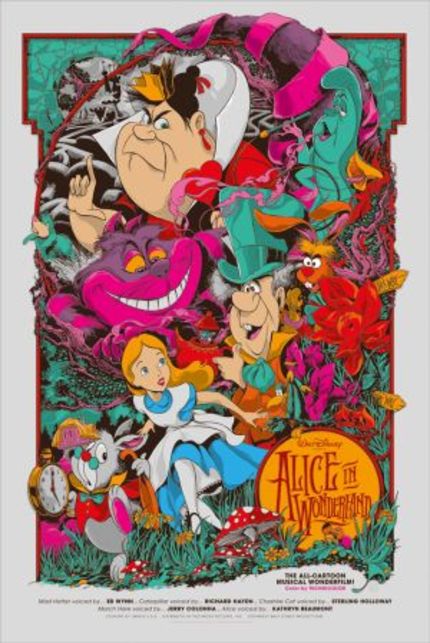 Mondo has put up some of its most impressive gallery shows during SXSW in the last few years, including a Tyler Stout/Ken Taylor exhibit and another one entirely dedicated to HBO's Game of Thrones. It couldn't be different this year, but the good folks behind the art division of Alamo Drafthouse are really going the extra mile this time to present "Nothing's Impossible", a Disney themed show with new and original artwork by names such as Aaron Horkey, Ken Taylor, Martin Ansin and Jason Edmiston, among others (check the impressive lineup in the image below).

Mondo, the collectible art division of Alamo Drafthouse Cinema, is partnering with Disney's "Oh My Disney" blog to unveil "Nothing's Impossible," a gallery event at this year's South by Southwest Film Festival, from March 7 - March 11, 2014. The gallery will open to the public on March 7 from 3:00-10:00 p.m. with regular hours to follow for the show's duration. The Mondo Gallery is located at 4115 Guadalupe St. in Austin, TX.

After partnering last year to debut limited edition artwork inspired by DuckTales and The Little Mermaid, Oh My Disney and Mondo invite fans to explore decades of beloved Disney films and characters like never before through original and fresh artwork from some of Mondo's most renowned artists like Martin Ansin, Jeff Soto, Jason Edmiston, Mike Mitchell, Ken Taylor and Rich Kelly. Oh My Disney, a new pop culture blog on Disney.com, brings classic and current Disney characters to life for digital audiences through humorous and heartfelt original artwork, stories, articles and videos.

"Disney has a special way of bringing out the magic in all of us and we're very excited to bring that feeling to Austin at this year's gallery event," said Mondo CEO Justin Ishmael. "Having worked with Oh My Disney over the last year, we know the site celebrates reinventing timeless stories and we hope our work sparks the imagination of both Disney and Mondo fans."

Oh My Disney and Mondo will release posters digitally every week leading up to the gallery's opening on March 7th. 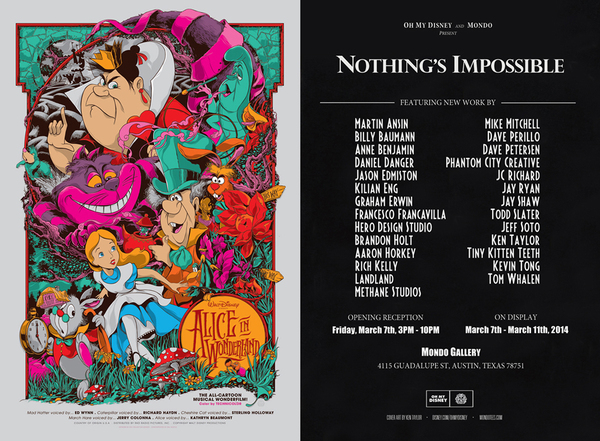 See that there? It's a line beginning to form in front of Mondo Gallery. Don't forget to follow Mondo on twitter and the Oh My Disney blog for the weekly reveals. Meanwhile, feast your eyes on this amazing Ken Taylor 24"x36" poster for Alice in Wonderland, which has an edition of 490 and will cost $55.