First Trailer For FAROESTE Brings Out The Big Guns 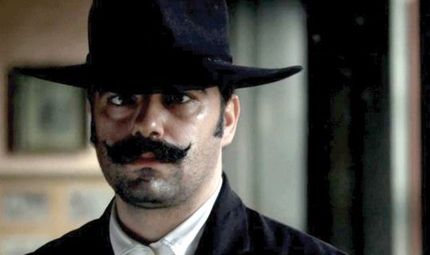 The first trailer for Abelardo de Carvalho's Faroeste (Western) might appear intriguing to some: a western shot in Brazil? Yes, it is quite unusual, but Carvalho's debut brings back to screens a genre that was quite popular in the country a few decades ago, with films now commonly known as "Feijoada Westerns".

Teaming up with Rio based producer Cavi Borges, the director shot the film in the small city of Pains, in Minas Gerais, in the heart of the region where the notorious real life killer Luís Garcia was killed after leaving a trail of blood behind himself in the early years of the 20th Century. Release info is still TBA for the low budget production, which was written by Carvalho himself, based on stories of his book "Bestiário". Here's the official synopsis:

A farmer leaves his hometown to search for gold as a gift to his beloved. But what seemed to be just an ordinary journey turns out to be the inner search of a man, who in the midst of a mystical crisis, clashes with the triviality of everyday life, creating a scene of evil and unrest among his peers. Luis Garcia is the embodiment of change, as he makes us realize, throughout his journey, his internal changes and external provocations.

The various spheres of human feeling are present in this film, Faroeste. However, this is a western without shooting, without historical duels, in which the real conflicts are given in the context of religious and ethical awareness. It's a film about silence, introspectiveness, about the archaic interior of Minas Gerais, with all its traditions, that serves as a backdrop to the saga of Luis Garcia, which will led him to the most unthinkable of deaths. It's a psychological clash that goes back to the drama of Riobaldo, main character of "The Devil to Pay in the Backlands", from Guimarães Rosa. All violence is more suggested than shown, in a staging of human restlessness and memory. Without missing the measured pace of the rural experience, the film outlines the allocation of an universe in which cruelty and villainy punctuate the lives of the characters with the rigor of the great tragedies.