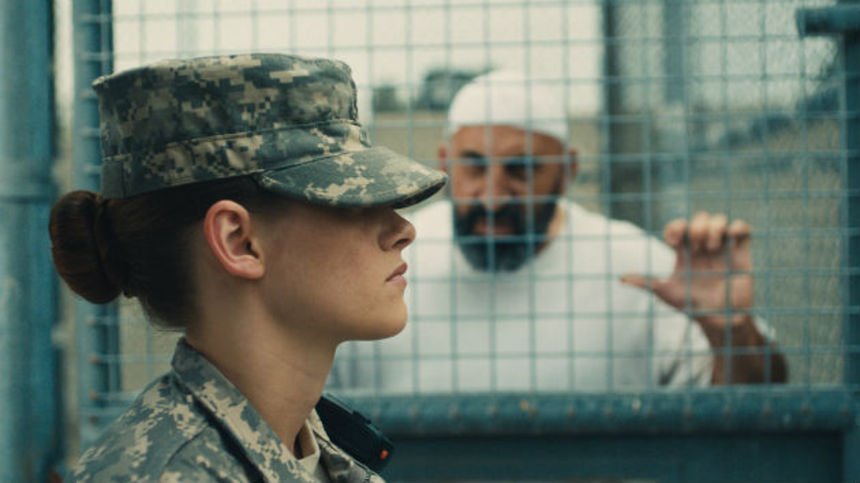 I was busy processing the ending of Camp X-Ray, a film about a soldier relating to prisoners in Guantanamo Bay, when I saw the credit - Executive Produced by David Gordon Green.
It's hard to say just what effect this great filmmaker had on Peter Sattler's film, but it did lead me to think a little harder about it than I might have otherwise. And I've concluded it just might be a very good film, almost a great one, if you buy one thing - its protagonist is an idiot.

Now, this will be a bit spoilery, but you'll forgive me, as the ending of the film may either ruin it or make it something kind of great. Before we get to that, let me state unequivocally that Kristen Stewart is perfectly cast in this film. She's always had some hard features, and her role as a small-town Army girl thrust into the moral quagmire of Gitmo is played to near perfection.

Stewart provides just the right mix of toughness and fragility, and she's entirely believable in her role. She spends the best part of the film in a kind of battle of wits with the imprisoned Ali Amir, played with scene-stealing brashness by A Separation's Peyman Moaadi.

Through the film, we see the kind of transformation we expect, the humanizing factor that occurs when the prisoner begins to feel that most critical of emotions, empathy, towards their captor. There are moments of humour mixed with despair, sometimes over something as simple as the latest volume of a Harry Potter novel.

It's in these deft little moments that Sattler's script leads the audience, too, to share empathy with all involved - the supreme boredom and repetition shared by both jailer and jailed. This is an ecosystem, a sort of penal coral reef where each organism plays its role.
[Beware -- Spoilers for the ending of the movie ahead.]

Which leads us to the most morally unsettling part of the film, its conclusion (and, again, this spoils the ending). If we're to read it on face value, Amy gives Ali the book with the inscription, finally seeing him not as a war criminal but as "a good guy". She's gone from small-town, small minded Floridian to one who can see the unfairness and cruelty of the imprisonment, and no doubt believes unequivocally that the imprisonment of Ali is both unfair and unjust.

Except, of course, both she, and we, don't know that. The most effective part of the film is when Ali is playing what Amy calls "that Hannibal Lecter" shit. We don't know what Ali has done, we only know that he has fought back against his imprisonment in a way that we all can find something heroic in that behavior, regardless of his circumstance. Yet is he a murderer? Are we to believe his claims that his interrogators find him to have done nothing wrong, that he is the lion that can no longer be led back to the wild?

We don't know, and in many ways the film is best when these answers are left unanswered, when the morality of the situation is shown to be entirely grey. Yet for Amy, she's made up her mind, and I feel that kind of catharsis will equally sway most audiences.

Except, of course, she could be seen as completely wrong. For Ali, as are we all are, are free from neither good nor evil deed. The simplistic binary that Amy is working on is simply a knee-jerk flip-flop from her previous point of view. She's gone in as a small town, small minded soldier and in some ways has left the same, having been gamed by an intellect clearly superior to her own.

It's an odd thing to have a protagonist outwitted in such a way - Clarice after all stood always one step ahead of Hannibal - but it's perhaps to this film's great credit that this film may provide a moment of catharsis that itself is even more unsettling. And just as when I thought I might be reading too much into this film, maybe giving it too much credit, I saw David Gordon Green's name up there. And then I thought, perhaps, I might not be reading enough into the film.
As an exercise in drama with some powerful performances, Camp X-Ray is a remarkable film. As a straight ahead feel-good outcome, it's problematic on face value, yet extremely deep if my reading is correct. I can't claim to know what the filmmakers had in mind, but I choose to believe that the fatuous line written in the book is so over the top, so telegraphed by earlier events that it's meant to clue in audiences that, hey, this girl's still not getting it.
As a work of moral ambivalence, it's extremely interesting. As a jingoistic apology for imprisonment, it's flawed. I choose to believe based on the pedigree of those involved that my former reading is both the more interesting and the more accurate analysis of the film.
[End spoilers.]
I'll leave it to you to see if you agree with my assessment.

Do you feel this content is inappropriate or infringes upon your rights? Click here to report it, or see our DMCA policy.
Kristen StewartPeter SattlerPeyman MoaadiSundance 2014Nawal BengholamLane GarrisonJoseph Julian SoriaDramaWar