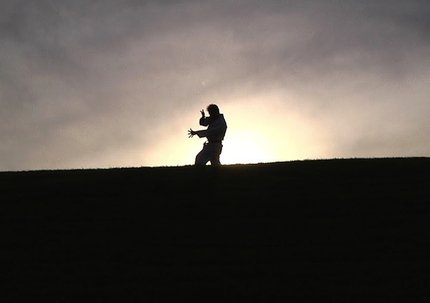 Yes. You read that right. Canada's first action hero. China has Jackie Chan and Jet Li. America has Arnold and Sly. Europe has Jean-Claude Van Damme. And if Elliot Scott has his way, Canada will have... Elliot "White Lightning" Scott.

Documentarians Jaret Belliveau and Matthew Bauckman come to Halifax, Nova Scotia to document what will be Elliot's third feature, Blood Fight, a no-budget martial arts B-movie. Just like his first two features, it has the potential to be a "great Saturday night movie to watch with a few beers and the buddies." Elliot tell us this, sitting on the floor, Chuck Norris and JCVD DVDs spread out at his feet. He then follows that up with "I'm happy if people say stuff like that... or some girl talking about how, you know 'oh Elliot was in his underwear in that film. That's like some real sex appeal.'"

Elliot has been filming Blood Fight on the weekends for just over a year in and around Halifax. He uses a small digital camera which primary function is not video recording. His partner Linda actually does the majority of the filming. Elliot stars and directs the other actors, coordinates the stunts. Blake, a soft-spoken, heavy-set man who derives his talents from the Stella Adler method school of acting, is playing the villain to Elliot's hero: a mob boss who is also Elliot's character's father. Their character names are Mob Boss Marc and Rain. Elliot tells us his background is in karate and kickboxing. He states that he was Canada's full contact karate champion in both '98 and '99. Elliot is a small man, in no way physically imposing nor very fit. Linda chides him for eating big slices of cheese, which he hoards from her as he knows he's not supposed to eat them.

So we're at the point in the review where you must be asking yourself, how serious is this film? What's the angle, because it seems as if these people are pretty naive as to what's going on. Are Bellieveau and Bauckman interested in Elliot because they think he's pathetic? Or are they genuinely interested and delighted by the guy. Well, as they say... truth is stranger than fiction. And we aren't even anywhere near the truth yet.

Elliot may strike us as a dreamer woefully out of touch with his surroundings, himself and his friends and family, but he's also the first one to call his work "acceptable cheese". There's a tenacity and perseverance that makes this largely unremarkable looking man quite endearing. His DIY spirit is, after all, what a festival like Slamdance is all about. His naivety is charming, especially as we come to realize how detrimental it can be to merely associate things in the contexts of good or bad, professional or amateur. Who are we as audiences and critics to really deny someone their dreams?

Linda works in a child care center. When she and Elliot moved in with each other, Elliot had recently been laid off. He's currently not working but taking classes to become an acupuncturist and is even prepping for a trip to China with his class. Linda is the one that is constantly having to help Elliot stay grounded while not denying him his dreams. And that's a full time job unto itself. At home, they argue over getting married, whether or not a ring is important, and how Elliot can't eat chocolate chips. On set he insists on being doused in gasoline and set on fire for Blood Fight's biggest stunt. Linda threatens to leave him if he does. When Elliot is asked about the death of his first wife he isn't in the mood to talk about it.

It's 1987. Elliot is six years old. He and his father drive out into the woods to chop down trees for a house they're building. Elliot watches from the back of the truck as a tree falls in the wrong direction. Right on the truck. Right on him. He's rolls through several comas. Darkness. Light. Darkness. The doctors are amazed he woke up the second time, the third time. "Every super hero has to have their origin," Elliot declares. "I am a super hero in the movies for those people that can't be super heroes anywhere."

Soon Elliot departs for China, hoping to utilize the setting for the film in someway, and maybe, just maybe, getting a chance to fight some Shaolin monks. He spends most of his time chatting up girls, getting massages, and convincing Chinese tourists that he's a big action star in Canada... and would they like to pose for a picture or have an autograph. A moment: Elliot is lying on his bed in his underwear, just after a massage. The light is low and frames his body in a dirty-red shadow. His money lays neatly at his side. He talks of buying Linda a jade engagement ring. There is something very, very off about this moment. In this light Elliot looks creepy. In his underwear and with his money Elliot looks sleazy. Just who is Elliot?

A pause here. The rest of the review may spoil some aspects of the film, but are so integral to the whole that they cannot be so readily ignored. That is to say tread lightly, or not at all if you want to go in cold. Then again, if you wanted to go in cold you wouldn't have started reading this review.

What begins as a competent and pleasant enough doc about a loveable loser with big dreams unravels in its third act, to only become something of a masterclass in -- depending on how one looks at it -- narrative structure and device, or flat out manipulation. Elliot was in a coma at six, but it wasn't because a tree fell on him. Elliot's ex-wife did get hit by a drunk driver, but she she is not dead. Elliot hires prostitutes for his exploitation flick and fucks them in between takes at Blake's apartment. Elliot and Linda break up.

How much has Elliot duped Bellieveau and Bauckman? How much have Bellieveau and Bauckman duped us? As soon as the sticks start to fall we realize how much has felt just slightly off this whole time. The last 80 minutes have been a mask for a lifetime of pain. What we are left with is a man who has been fabricating and concocting stories, half-truths and outright lies to himself and to everyone around him for a long, long time, and now he doesn't want to be found out.

So does it matter if we feel duped, cheated, and just plain baffled by Elliot the person, and Elliot the film. We ask ourselves "What have we gotten into." Bellieveau and Bauckman ask themselves "What have we gotten into."  As a study of psychosis, of how we build our own narratives to shield ourselves from the wolves of reality, Elliot is dynamic, deceptive, and powerful filmmaking. Yes, it feels like the rug has been pulled out from underneath us, but then again that's real life, or well... that's the inherent power of the movies.