Opening: THE ADVENTURER: THE CURSE OF THE MIDAS BOX Lacks Its Namesake's Touch 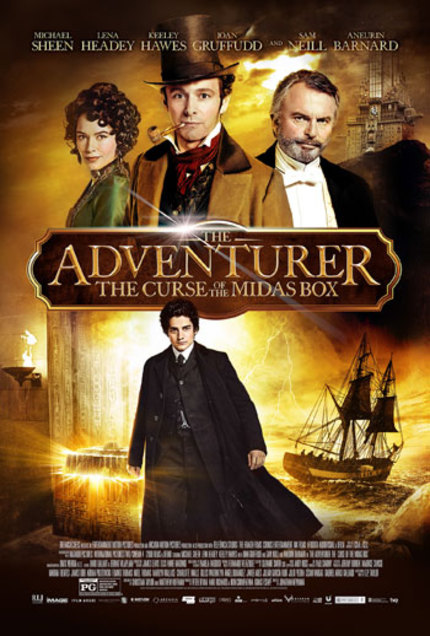 The Adventurer reminds me a lot of films from my youth like Something Wicked This Way Comes and Young Sherlock Holmes. Family oriented films, but slightly darker. But, perhaps just going by the title I expected a bit more... fun. Here is what the official synopsis has to say:

Ancient mysteries.  Powerful evil.  And a fearless hero's quest through a fantastical realm of steam-powered wonders and sinister magic... In THE ADVENTURER: THE CURSE OF THE MIDAS BOX, seventeen-year-old Mariah Mundi's life is turned upside down when his parents vanish and his younger brother is kidnapped.  Following a trail of clues to the darkly majestic Prince Regent Hotel, Mariah discovers a hidden realm of child-stealing monsters, deadly secrets and a long-lost artifact that grants limitless wealth - but also devastating supernatural power.  With the fate of his world, and his family at stake, Mariah will risk everything to unravel the Curse of the Midas Box!

That is not to say that it is not but I think a bit more spectacle would have made this a real winner. This is more like National Treasure for a more civilized crowd. It is a U.K. production, after all.
Sam Neill and Lena Headey fulfill their roles as villains nicely. Which reminds me, I have to go back into Headey's career and find something where she plays a nice person. Aneurin Barnard, who made a big impression in Citadel a couple years ago does well enough too. Likely the person who had the most fun in this film is Michael Sheen as Will Charity, another agent from the department of Antiquities. He does add much needed color and life to this film when he sparingly appears.
Still, The Adventurer is a good movie to take the kids too, pending their tolerance of darker material. There is enough action and mystery to keep the younger crowd entertained. There should be enough hidden passages, dark magic, cronies and secret agents running about the Prince Regent Hotel to entertain all family members.
The film is now available to watch via various Video On Demand platforms. It opens in select theaters in North America on Friday, January 10.
Sign-In to Vote
Tweet 0 Submit