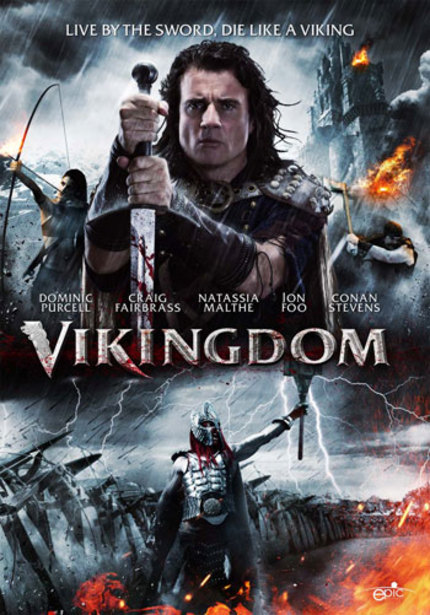 Right off the hop I have to say that Vikingdom is a real slog to get through. It is almost a staggering two hours long! Just as a common-sense rule, no action film should be two hours long. Period.
And the real shame of it is that so much of this run time is taken up with a lot of talking. I thought I was in for an over the top treat when the opening credits rolled to the sound of heavy metal. Ah, I thought, here is a movie that does not take itself seriously and I can sit back and have a bit of fun. Sadly, I was misled by those opening riffs.
None of the acting is very good. I almost feel bad for everyone involved because this is so achingly awful. Dominic Purcell's acting is wooden. How wooden is it? It is so wooden and I am so befuddled by it that I cannot come up with something clever to say. There is nary a streak of emotion in his acting, specifically his dialogue delivery. He makes 80s Dolph Lundgren look like a thespian for the ages.
The action might be good but I cannot be certain. The problem here, and it is a common issue, is that the action is edited to the point where a strobe light would come across as lazy. It is indiscernible. It is incomprehensible. The scars left behind by Zack Snyder are evident as everyone jumps around through the air as if the battlefield were littered with trampolines. Film speeds are messed around with to highlight action that does not need to be highlighted. Any attempt to make the action and fighting come across as exciting fail to do so simply because of how poorly it is staged. Really, all the actors had to do was stand with their arms extended and hordes of bad guys would simply run into their swords. So sad.
Vikingdom bears the burden of its modest budget. It tries too hard to be taken seriously and comes across as half-baked entertainment. When your subject matter is a living dead king fights a Norse god for the fate of humanity that is a license to have as much fun as is possible. As it stands, Vikingdom is not fun at all.
I feel I deserve the right to be childish by now...
Vikingdom? More like Viking-DUMB!
Sign-In to Vote
Tweet 0 Submit

Do you feel this content is inappropriate or infringes upon your rights? Click here to report it, or see our DMCA policy.
Dominic PurcellVikingdomYusry Abd HalimJames CoyneNatassia MaltheCraig FairbrassJon FooActionAdventureFantasy

This is how lame film producers in Malaysia steals from government, by making dumb-ass flicks such this from grants given.

Dominic Purcell can be very good. I wish he didn't waste his time with that kind of film.

That's a stupid statement-- ever seen the Wild Bunch? The Good, The Bad, and the Ugly? Apocalypse Now? Army of Shadows? Terminator 2? Even 13 Assassins is well over two hours (assuming those others aren’t contemporary enough for you.) Were you joking or do you really have the world’s shortest attention span? I don't think “two hours is too long to have to sit still” is a very inspiring rallying cry for a film critic.

You forgot Seven Samurai, still the greatest action movie of all time at 200 minutes.

That one passage pretty much lets me know Andrew Mack is not a critic I need take seriously from here on.

First of all gentlemen, thank you for the accountability. It has not gone unheard.

Second. As far as my attention span goes, I would say it is pretty goo- Ohh look! Shiney!

And third. You have both brought up titles, excellent examples all of them, that have lengthy run times. I as well have enjoyed and own nearly all of these in multiple formats. On top of that there was news that the most anticipated and entertaining action film of the year, The Raid 2, clocks at whopping 2h 50m has me eating crow for sure. So to start my review with this generalization and blanket statement was irresponsible and does not properly express what my frustration was with this one film.

It is not the run time that I have a problem with but how that time is used. And I did not convey that properly in my review. When a film like Vikingdom spends more time on needless dialogue and discourse then it does dishing out the hits then one of the issues here is pacing. Two hours or more for a run time is fine, and I can sit still for two plus hours and watch a film. But, if you cannot keep me interested, engaged and entertained then another issue here is content. And these concerns are what I should have emphasized in my review instead. 30 minutes could be trimmed from this film and make it flow better, faster and inject some excitement into it. As I stated at the end of my review, as it stands Vikingdom is not a fun movie. It should have been.

In the back of my mind I knew that statement was going to get me in hot water. Also, this is not an excuse but I only received the film on Monday and was pressed for time to get a review written up so we could publish it Tuesday on the day of release, appease the publicists who were kind enough to get us a copy, so they in turn could show the filmmakers and studio they are doing their job as well (I wrote the publicist on Tuesday and suggested that they might not want to share my thoughts with the studio - Heh). Had I the time to review my own copy I likely would have deleted this generalization and may have better stated my concerns about the film.

Thank you for your time gents.