Review: THE LAST DAYS ON MARS, As Lifeless As The Planet Itself 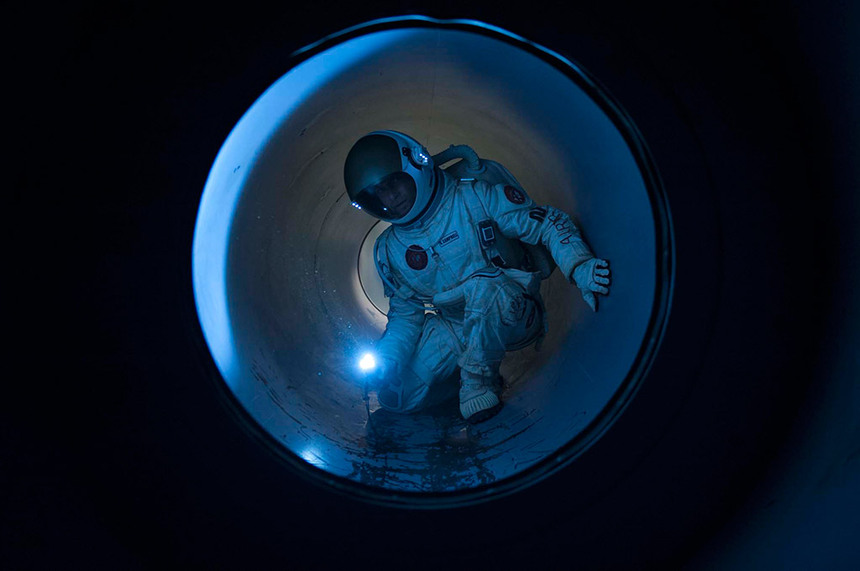 After the screening of The Last Days on Mars in the director's fortnight competition, many were wondering why exactly the clunky, derivative Mars-zombie movie was programmed at a high-class festival like Cannes. Fair enough, but the bigger, even more nagging question in my mind is why the movie was made at all.

Clearly, director Ruari Robinson has considerable visual talent. Coming from an effects background, his shorts like BlinkyTM and Fifty Percent Grey gave him enough clout to direct a feature, and it's easy to understand why. Despite being made for probably a tenth of the budget of most sci-fi blockbusters, the Mars landscapes, complete with epic dust storms, and space travel are beautifully rendered. A few shots even carry an ethereal, haunting power that belong in a different movie.

So why put these talents towards such a lame, self-serious retread of Alien and Ghosts of Mars? Why stay content to examine the red planet with so little wonder, humor, curiosity or innovation? Why think you could get away with making such a self-serious space zombie movie?

Search me. In any case, take the structure of Alien, replace titular monster with grey, uninspired space zombies caused by bacteria, go through every single plot beat with just enough dialogue to get to the next set piece and you've got The Last Days on Mars.

(Mild spoilers follow if you have never seen Alien or an Alien rip-off before.)

In the film, Liev Schreiber and Olivia Williams and some other people are about to leave their six-month Mars expedition without having discovered any form of life. That is, until the shifty Russian crew member goes out on his own and finds a bacteria in the crevices.

Robinson clearly knows his way around digital landscapes -- the epic establishing shots and exploration scenes look fantastic -- yet he has no sense of pacing or suspense, and almost as little skill for directing monster-attacks. The action is mostly incoherent and surprisingly bloodless. Shake around a camera in a closet with a strobe light on, then put about 1000 layers of screaming and snarling sound effects and an overblown score over the footage and you've recreated most of the attack scenes. 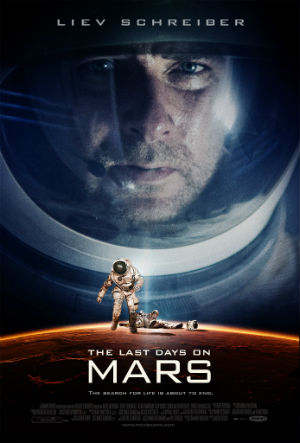 While it rips off Alien in spades, even having the balls to include a scene that finds a character crawling through a small tunnel to escape, the more obvious comparison is, as mentioned, Ghosts of Mars. That movie became the butt of quite a few jokes, but at least John Carpenter knew that grey-faced space-zombies weren't going to be particularly scary, and as a result, added such howl-worthy scenes as the space-zombie master speaking to his minions in a made-up language. And also, that movie had a Mars train, which is really cool.

The Last Days on Mars, on the other hand, takes great pains to be very serious. In between attacks, one character will ask another if they believe in life after death. The other character says he doesn't know. Both reflect on the deep implications of this question in light of the space-zombie scenario and come to no conclusions. Also, I feel like pretty much every character talked about how much they missed their kids right before they got killed (read: potential drinking game for the DVD release).

I'm perhaps a little more bitter and a little less dismissive of the film simply because of Robinson's obvious talent on display here. I was rooting for the little sci-fi Horror film that got into Cannes, and I do respect anyone who can make something look this nice without billions of dollars. But that's all the more reason not to let Robinson off the hook for this one. To my mind anyway, wasted talent is even more depressing than talent that never existed in the first place.

Review originally published during the Cannes Film Festival in May 2013. The film is now available to watch via iTunes and other Video On Demand platforms. It will open in selec theaters in the U.S. on Friday, December 6. Visit Magnet Releasing for more information.

Do you feel this content is inappropriate or infringes upon your rights? Click here to report it, or see our DMCA policy.
horror movieLiev SchreiberOlivia WilliamsRuari Robinsonsci-fiscience fiction

More about Last Days on Mars