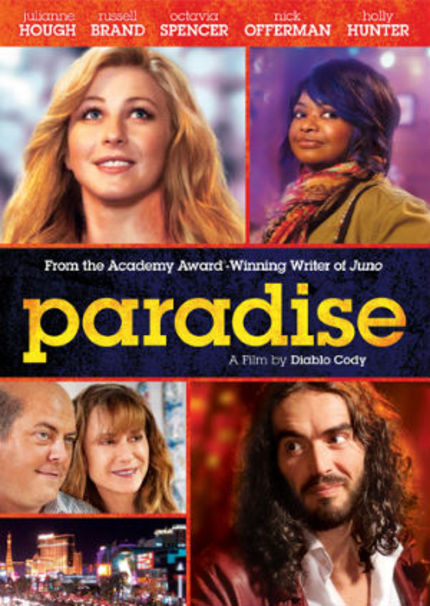 What is partying, exactly?

Images of clubs saturated in blue and magenta light, where well-coiffed dudes and sexy women grind slowly through rooms filled with people overjoyed with high-priced mixed drinks are so familiar that it would seem to take an incredibly naïve person to even ask that question. "The club" has acquired such a mystique that it seems like the habitat of a worldly god. Not religious? Want to live a fuller life? In America in 2013, partying is how we pray.

This, at least, is how it appears to our naïve protagonist Lamb Mannerheim (Julianne Hough) in Diablo Cody's playful new film Paradise. Raised in a strictly religious household where she was forbidden the fruits of pop culture, Lamb renounces God after a violent plane accident that left her on fire in a Kroger's parking lot. The film wastes no time dallying with pre-accident "marshmallow" Lamb. The first scene in the film is of her describing her skin grafts to a horrified congregation. "I believe in science... I believe in prescription opiates. There is no God" she testifies. It's a great, funny scene that sets the tone for the rest of the film. Paradise is a dry comedy about illusions.

So, "with a heart full of rage and an LL Bean bag full of cash" Lamb speeds off to Las Vegas, the city-club. Lamb has been raised to feel like an outsider, and now she is determined to do all the things that had been forbidden to her as a Christian in Montana. "Am I in the first five minutes of a pornography?" asks Loray, the weary 'bartainer,' when Lamb describes this mission to her. Yeah, the movie could've been that bad. But the characterization is nuanced and the script is self-aware enough to avoid most of the clichés you think are coming. Someone like Lamb isn't going to become a bad girl overnight and this Vegas isn't the glitzed-out pleasure palace the chamber of commerce advertises.

The Vegas depicted in Paradise is the land of drunk bros and faint melancholy which many of us are familiar with. One of the best aspects of the film is its subtle satire of party culture. "Here's your plastic penis full of liquor- enjoy your lifestyle" quips bartender William Carr (Russell Brand, who's allowed to do a lot of sarcastic British riffing and is enjoyable in the role). The background is filled with the kind of inane blurts anyone who's ever been sober in a club might recognize ("I'm drunk bro!"). With the well-experienced William and Loray as her guides, Lamb is whisked immediately away from the Strip (a "baby boomer magic mushroom shit show") and into old Las Vegas where the innumerable people working in the city's service industry go to party. This city is less about magical wonderment and more about chugging beer and downing pills to block out the day.

Lamb, however, is determined to find that mythical release through excess and 'sin' that advertising suggests is possible. Her will is not to be thwarted by the fact that she doesn't like alcohol or by her bleeding skin grafts. "I just want to be a regular American" she says. It's easy to identify with her. Being an American is often about determined excess, binging and frantic consumption in an effort to feel comfort in the face of pain. But Lamb thinks her upbringing has made her special, that paradise has been withheld from her, and that her accident provides her with the scars she needs to relate to the damaged world. Her quest to party culminates with rather mundane blackout and some puking into a trashcan. Realizing there's nothing there, the final third of the movie is more about connecting with people through shared trauma than it is with superficial sin.

This relatively undramatized humanistic aspect gives Paradise an edge that much edgier films lack. Movies, as entertainment, are often unable to engage in believable critiques of the urge to indulgence that motivates them. There isn't any sex or violence in Diablo Cody's picture, but the film connects with the audience by creating characters that are funny and relatable. It's also reflexive enough to navigate between moralistic pitfalls that could easily overwhelm it. When Loray (Octavia Spencer) playfully accuses Lamb of viewing her as "a magical negro" who gives advice to characters as a plot device, we get the sense that Cody is comfortable with the tropes of Hollywood filmmaking and can deploy an awareness of cliché to her advantage. The result is a fluid sense of realism that isn't excessively labored over.

In all, Paradise is a funny take on the spiritual and how it relates to contemporary America's obsession with excess and partying. Running only 86 minutes, it never drags or feels preachy. Although its themes are fraught with ideology and import, its focus on characterization drives its point home well. You can't get to paradise by praying or by partying - but you might get somewhere near there if you can relate to people despite their scars.

Paradise is available to watch via various Video On Demand platforms. It's also available on Blu-ray and DVD from Image Entertainment and retailers everywhere.

Do you feel this content is inappropriate or infringes upon your rights? Click here to report it, or see our DMCA policy.
Diablo CodyJulianne HoughOctavia SpencerRussell Brand