Review: Indie Darling BREAKFAST WITH CURTIS Will Leave You Hungry For More 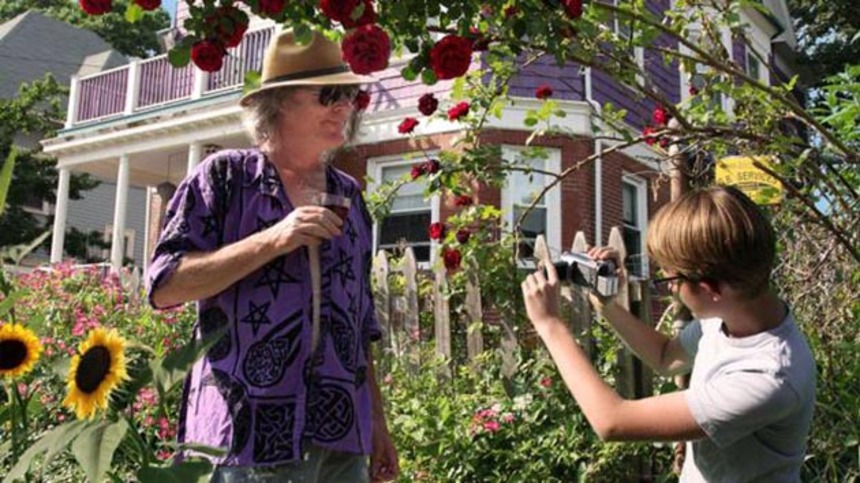 Seeing Hook for the first time as a child, I remember being enamored with Spielberg's vision of Never Never Land. For days and days after leaving the theater, I was fixated on the idea of living in that magical world. Memories of that experience came flooding back while watching Laura Colella's uber-charming film, Breakfast With Curtis. With a loose structure that allows you time to just enjoy yourself, Colella has captured her own Never Never Land (albeit a somewhat more adult version) that is sure to make you want to pay a visit.

Set in a friendly college-towny neighborhood of Providence, R.I., the entire film takes place at a funky house known as the Purple Citadel. Subdivided into three apartments, the Purple Citadel is home to a cast of delightfully unique characters. Syd (Theo Green), the unintentional patriarch of the clan, is an eccentric writer who spends his days drinking burgundy, paying as little attention to his used book business as possible, and recounting stories of bygone adventures to anyone who will listen (and to himself if no listeners happen to be nearby). His girlfriend, Pirate (Adele Parker) is an artist (aren't we all) who keeps an eye on the well-being of the lovely older woman, Sadie (Yvonne Parker), who lives upstairs. At the top of the house live Frenchy (Aaron Jungels) and Paola (Colella) who spend the majority of their time keeping their svelte figures through a regimen of smoking pot and making love.

Next door to the Purple Citadel lives a painfully introverted 14-year-old boy Curtis (Jonah Parker) and his parents Simon (David Parker) and Sylvie (Virginia Laffey). An incident long in the past caused a rift between Syd and Curtis's family that has caused some amount of strife between the houses. Ostensibly, the film is about the groups attempt to heal that rift and cure Curtis's introversion via a video project that Syd convinces Curtis to embark upon. Really, the plot is just an excuse to spend a fun-filled summer with freaky folks at the Purple Citadel. Robert McKee be damned, the lack of clear plot velocity does nothing to diminish the loads of enjoyment to be had in this film viewing experience.

With the tagline, "loosely based on fiction," the vestiges of reality in the film only serve to make the story more appealing. A sharp eye may have noticed the surname Parker showing up quite frequently on the cast list. Not only do all of the actors actually live in the two houses featured in the film (including director Colella), most of them are related in one way or another as well. While an exhaustive family tree may not be necessary for comprehension (though you can read more on the film's website), suffice to say the on screen chemistry, as well as the performances by these nonprofessional actors, is stellar.

Aside from all the fun to be had watching the gang at the Purple Citadel philosophizing, drinking, and playing ping pong, Breakfast With Curtis also contains numerous scenes of hilarious situational comedy. Though maybe not so tight in the plot department, Colella's script sings with genuine humor. One scene in particular left me gasping for air long after it ended, embarrassedly unable to stop laughing.

And that is really the point of Breakfast With Curtis. To show that from time to time we all could use a step away from reality to our own Never Never Land. Colella's Never Never Land is her Purple Citadel; a place where everyone reads and drinks and loves and laughs. With her film, Colella has created an incredibly enjoyable place to visit, and damn if I'm not dying to move in.

Review originally published for the Los Angeles Film Fest premiere in June of 2012. The film starts a one-week run at LA's Downtown Independent on Friday December 20, 2013. It will be available on VOD beginning January 14, 2014.
You can find more info the film's VHX homepage here

More about Breakfast with Curtis