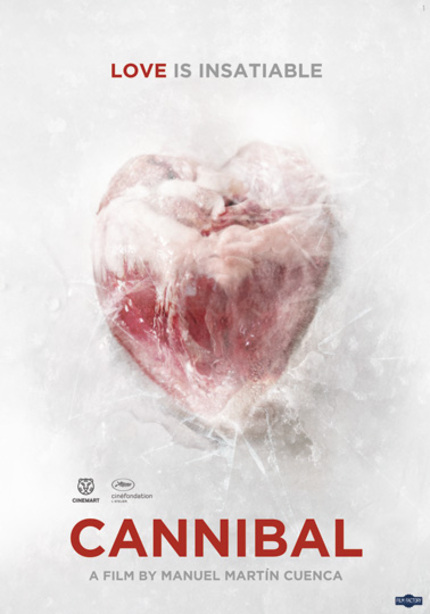 While I wasn't able to attend TIFF this year, a colleague in the press office (knowing of my love for Spanish film & my film criticism) made sure that I was able to see Martin Cuenca's thriller Cannibal. And I'm certainly glad she did, as I expect it will be on my top 10 of the year list.  Luckily, North American audiences will be able to find out why: Film Movement have picked up the rights, with plans for release in 2014.

The film stars Antonio de la Torre as Carlos, a tailor of men's suits who lives a relatively isolated life in Granada. He is also a cannibal, killing young, foreign women with few ties who cross his path. After he murders and eats his Romanian neighbour, her sister, Nina, inquires after her whereabouts. Despite himself, Carlos begins to help Nina, and a strange romance begins. In my review, I called it "a minimalist thriller, a story of love and pain, stripped of veneer and yet controlled and refined. It is a film about light and shadow, the interior and exterior spaces we occupy, with a incredible central performance by de la Torre."

The deal was made at the market at Ventura Sur in Buenos Aires, quickly becoming one of the most important markets in South America. Leaning more to European art house cinema, Cannibal takes a unique approach to the horror trope. Full details in the press release below:

Film Movement, the North American film distribution company that brings first-run, award-winning independent and foreign films to fans all across the U.S. and Canada, announced today their acquisition of CANNIBAL (Caníbal). The film, which premiered at the Toronto International Film Festival and was named to Cameron Bailey's Mission List of films that will "transform the way people see the world through film," stars Antonio de la Torre (I'm So Excited, Volver) as a meticulous tailor with a savage secret. It will open theatrically in the U.S. and Canada in Q3 2014, followed by a VOD and DVD release.

CANNIBAL, which also played in competition at the San Sebastian International Film Festival, finds its disturbing yet engrossing chills in the unoccupied space of Martin Cuenca's sweeping landscapes and limited dialogue, where the grotesque private work of a prestigious tailor in small-town Granada, Spain is kept mostly off screen. Instead, the film explores the murderer's relationships with the women he kills, particularly that of a Romanian immigrant and the twin sister who comes looking for her.
In a TIFF interview with The Hollywood Reporter (here), Martin Cuenca said of the film, "It's a demon's journey into love. It's the presence of evil in our society. I'm on a journey to go to the essence of things, to the theatricality of film in the best way. Cannibal is a footprint of the times."

The deal was struck on the first day of the Ventana Sur market in Buenos Aires by VP of Acquisitions and Distribution Rebeca Conget, of Film Movement, and by Vicente Casales, Managing Director at Film Factory.

"Manuel Martin Cuenca has established himself as one of Spain's most artistically astute filmmakers, his works consistently evolving in skill and style. In Cannibal, we see a surprisingly thoughtful approach to an otherwise gruesome premise, one we're confident audiences will be as gripped by as we were," said Film Movement's Conget, adding "it is a pleasure to work with Film Factory again, in our first all rights deal with them, and it's an excellent way for us to start off this years's Ventana Sur, a film market that is significantly growing in quality and importance with every passing year."

Do you feel this content is inappropriate or infringes upon your rights? Click here to report it, or see our DMCA policy.
Antonio de la TorreCannibalMartin Cuenca