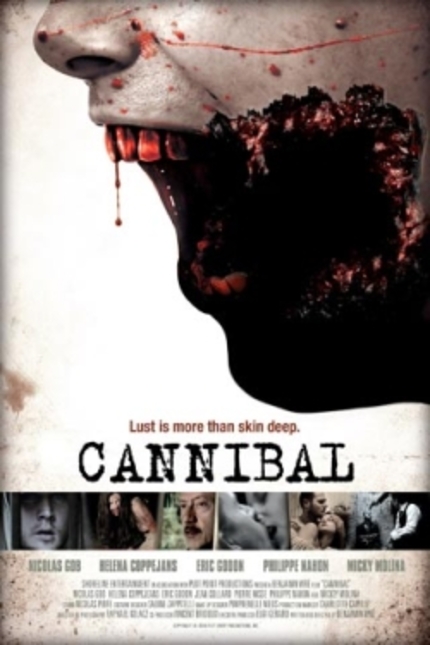 If you're planning to expand your expertise on Belgian films, Rundskop would probably be your first and most obvious bet. Live a little, take a risk and bet on Cannibal instead. Viré's Cannibal may not be as accessible as Rundskop but it packs a lot more skill, punch and raw power. Just don't go in expecting a mere genre film, Cannibal transcends its own roots and delivers a completely unique experience.

For a few years now there's been a constant stream of quality genre-defining films coming from Belgian soil. Films like Ex Drummer, 22 Mei, Calvaire, Vinyan and Small Gods mark the top of this like-minded series of films. You can see it as an extension of the French movement that started a little more than 10 years ago (led by people like Gaspar Noé, Philippe Grandrieux and Claire Denis). Dark, gritty and uncompromising films that dare to be different, but each in their own unique way.

Cannibal starts off as a pretty normal genre flick. Set in Wallonia, the Walloons (the French-speaking people in Belgium) are once again depicted as creepy, weird and twisted recluses living in their secluded forests (much like Calvaire). The film introduces Max, a scruffy-looking guy who avoids most human contact, especially that of the physical kind. His world changes when he finds a barely clad girl lying in the forest. Not knowing what to do with her, he takes her home.

In no time Max finds himself in love with this girl, but things aren't particularly going well between the two of them. When she sneaks off one night, Max follows her only to find the girl covered in blood, feasting on another human being. You would think this would cool Max' love for the girl, but apparently he feels quite at ease with her condition as he starts helping her to trap other victims. What Max doesn't know is that there are others looking for the girl.

Cannibal is a dark and gritty-looking film. Most of the camera work is hand-held, but the good, controlled and visually impressive kind. The film can be quite dark too, with some scenes eclipsing everything but some faint light sources. The framing is nothing less than excellent though and Viré knows exactly where to the camera needs to be at crucial moments. In the last half hour the film makes a surprising switch to high-contrast black and white photography, making it look even more beautiful.

But as impressive as the visual side of Cannibal might be, it's the soundtrack that really blew me away. Dark drones, distorted sounds and industrial touches all come together to create a very tangible, uneasy atmosphere. Viré really blows the roof off when he mixes a gut-wrenching scream into one of the musical pieces, together with the chaotic cinematography and gory images this particular moment comes as close to a waking nightmare as you can possibly image. Cannibal is one of those films that underlines the power of a strong, captivating soundtrack, more than once illustrating its vital part in the whole atmosphere-building process.

The acting too is impressive. Gob and Coppejans do a great job translating their impossible relationship to the screen, portraying the hardships of an unlucky couple trying to deal with their problems. Secondary roles are good too, most notably the appearance of Philippe Nahon (somewhat of a quality marker) near the end of the film. For a film that relies mostly on audiovisual impulses, the acting is surprisingly strong and consistent.

While the first hour still holds on to typical genre elements, Viré turns his film around in the last half hour. Don't expect a gory finale, when the film goes in black and white mode it makes a complete u-turn to end up as an urban crime-drama (more than once did I think of La Haine). It's a strange, somewhat unnatural switch, but even though it feels a little forced it still works remarkably well. While I was still hungering for more horror goodness, I quickly realized the second part was just as impressive.

The biggest problem with Cannibal is that title and cover art suggest a simple genre film, while Viré's film is way more ambitious than that. If you're just watching it for a quick gore/scare fix, you won't find much here. There's a definite feeling of dread and unease running through the film, but halfway through it abandons that for something entirely different. There's hardly any gore, hardly any suspense and no big horror finale, so be warned before getting your hopes up.

Cannibal is definitely my kind of film. Incredibly atmospheric, uncompromising and unique. There is still room for improvement, notably the switch in the middle could've been a little less harsh, but those are just minor complaints compared to the feeling of awe that the film left behind. I hope Viré gets the critical appreciation he deserves, Belgium needs directors like him to raise the bars for others to come. Must see.
Tweet Post Submit