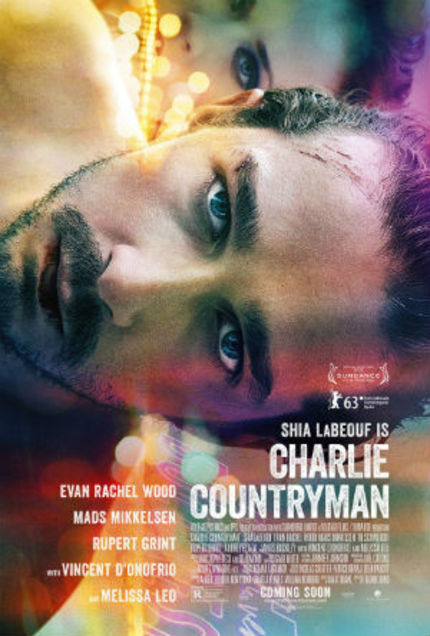 It stars Shia LaBeouf as the possibly-doomed titular character. Charlie just watched his mother (Melissa Leo, in the most tragically underused role possible) die at the hospital. After taking some painkillers to deal with his anxiety of what he just witnessed, he has an imaginary conversation with her, and she tells him to go on a trip to really start living life. It's supposed to be a coming-of-age love story, but it winds up being more of a coming-of-enrage story for us, the audience.

When Charlie is on the plane to his new destination, he converses with an aggressively gregarious passenger. This passenger tells him about his daughter Gabi (Evan Rachel Wood, with the most unconvincing Romanian accent ever), and makes it clear she's the only thing meaningful in his life.

While still on the plane, the passenger dies in his sleep and Charlie takes it upon himself to talk to Gabi about her father's final moments. When Charlie sees her, he immediately falls in love and begins to chase her around the city, getting into trouble everywhere he goes as he finds out more about her troubled past.

As the film opens, Charlie hangs upside down over a dam, bloody and beaten to shit. A narrator talks some jargon about real love and why it's the reason Charlie must die. This voice-over sounds like something you'd hear in a bad Tim Burton movie -- it's hazardous to the ears and takes you completely out of the movie.

What's unfortunate is that LaBeouf gives ones of the best performances in his career. He truly gives it his all here and he's so damn good that you want to like this movie based on his character's commendable determination to make a connection with the troubled Gabi. But he's overshadowed by a love story that's incoherent and unqualified to be loved. It's stylish and shot pretty, no arguing with that, but style doesn't always translate to good quality. It appears that director Fredrik Bond spent more of his time trying to make the film look good than actually be good.

The most aggravating thing about Charlie Countryman is Bond's use of music. He camouflages the deeply flawed film with entrancing music from Sigur Rós and M83. The music is used so much, it feels like one long music video, and I don't mean that as a compliment. When you hear Sigur Rós for a scene in a movie -- take Cafe de Floré for example -- this music is supposed to propel your emotions into a whole new dimension. In Charlie Countryman, it's shockingly annoying. I kept thinking, "OK, we get it - you want us to feel sad here or inspired there," but it's mostly just a lot of LeBeouf running in slow motion, partying with buffoons (Harry Potter's Rupert Grint and The Inbetweeners' James Buckley), and trying to get a foreign girl in a foreign land to love him when they just met.

Somewhere along the way, Charlie Countryman forgot to be a movie.

Review originally published during the Sundance Film Festival in January 2013, when the film was titled The Necessary Death of Charlie Countryman. The film opens in select U.S. theaters on Friday, November 15, and will also be available to watch via various Video On Demand platforms. Visit the official site for more information.

Do you feel this content is inappropriate or infringes upon your rights? Click here to report it, or see our DMCA policy.
shia LeBeoufthe necessary death of charlie countryman

More about THE NECESSARY DEATH OF CHARLIE COUNTRYMAN