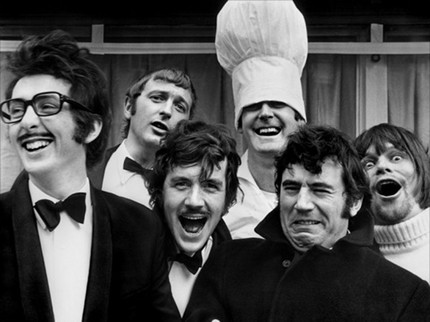 Details are still scarce, with the official press conference not scheduled until Thursday, but the surviving members of legendary comedy troupe Monty Python are confirming that they are reuniting for a new stage show. New material? Old material? A blend of the two? Nobody is saying yet but given that this is the first time that John Cleese, Eric Idle, Terry Jones, Michael Palin and Terry Gilliam will have performed together since a one off appearance at the Aspen Comedy Festival in 1998 - where they were joined on stage by the ashes of Graham Chapman in an urn - this is a very big deal.

Says Jones: We're getting together and putting on a show -- it's real. I'm quite excited about it. I hope it makes us a lot of money. I hope to be able to pay off my mortgage!
Tweet Post Submit

Do you feel this content is inappropriate or infringes upon your rights? Click here to report it, or see our DMCA policy.
eric idlegraham chapmanjohn cleesemichael palinmonty pythonreunionterry gilliamterry jones