AS THE LIGHT GOES OUT: Derek Kwok Delivers Thrills With First Trailer For Firefighter Drama 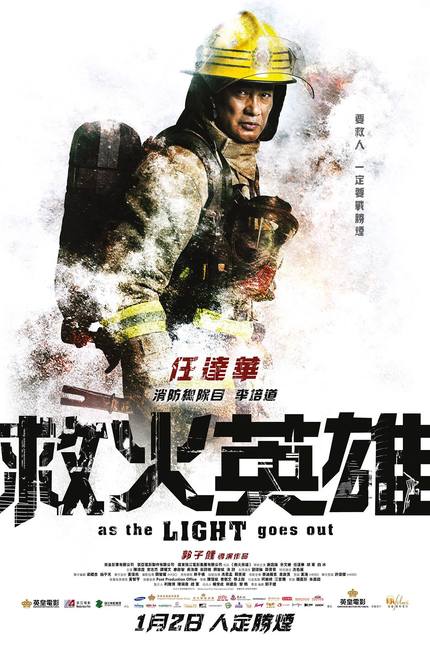 Ah, the wonders of parallel development, that odd quirk that - from time to time - results in two films with remarkably similar premises hitting screens in close proximity to one another. Why it happens is up for much debate - a spike in public awareness around a similar issue triggering interest from multiple quarters, the urge by one producer to beat another to the punch and steal their thunder are the prime reasons - but it definitely happens. Thus Hollywood produces Deep Impact and Armageddon right on top of one another while in Hong Kong right now we have multiple competing firefighter thrillers.

In one corner - and releasing first - there are the Pang Brothers with Out Of Inferno, a Lau Ching Wan and Louis Koo starring 3D affair. In the other corner there is Derek Kwok with his Simon Yam, Nicholas Tse and Shawn Yue starring As The Light Goes Out.

As a fire rages, so does mistrust.

The bond of brotherhood is always stronger when you can be pitched into a life and death situation at any time and the only thing that gets you through the inferno is the trust that your brother will have your back. The firefighters of Hong Kong's Pillar Point division who are expecting a quiet night to see off their retiring chief find their faith in each other stretched to the limits when a small fire at a liquor warehouse threatens to plunge the whole of Hong Kong into darkness if it spreads to a nearby power plant supplying natural gas.

Politics, rivalry, and suspicion all come into play when dubious decisions are made, warnings are ignored and colleagues start to fall. Can the Pillar Point brotherhood survive the night, if not the fire, with their trust in each other intact?

Given the general high quality of all of Kwok's work when compared to the general decline of the Pangs over the past several years the smart money has always been on As The Light Goes Out being the better of the two films and with the first teaser for Kwok's effort now arriving that seems even more the case as the production values, certainly, are absolutely top notch and the scale is impressive. Take a look below.