Review: SWEETWATER Would Go Down Better With A Bit More Sugar 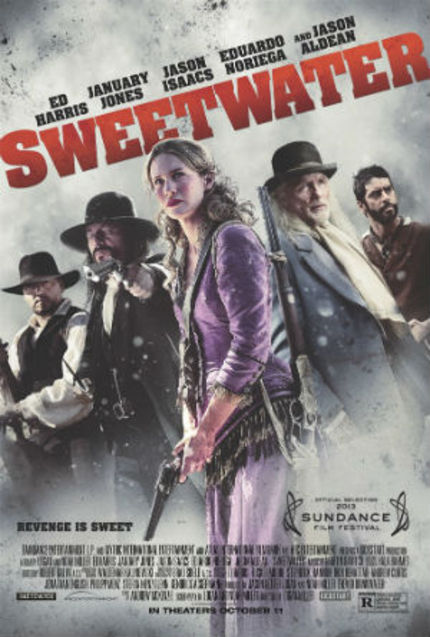 Sweetwater isn't easy to enjoy. For such a spare and tight film, there seems to be a lot of dead air. Part of that is because it brings together three narratives that don't mesh until nearly halfway into the film.

The fun really begins once those three characters converge and things are truly sent spiraling. Like a ricocheting bullet, it's hard to determine where Sweetwater --directed by Logan Miller from a script by Andrew McKenzie, Logan, and brother Noah Miller -- is going to end. Violent and dark, this feels like a William Friedkin-esque attempt at a Western set in the New Mexico territory around the 1800s. There are rare spurts of humor and most of it is from the way that people are dispatched without hesitation by the mostly straight-faced cast.

The lone exception is the oft-gallivanting Sheriff Jackson, played by Ed Harris. If one wasn't certain what theater you were in, you might mistake him for The Joker escaped from a Batman film. There's a danger underneath his dancing and zaniness that peeks out time and time again. When he is serious, it's likely not any good for those around him, like when he prances about while wrecking the office of one person who draws his ire.

Those moments of levity, though, don't come often enough to elevate the film beyond anything more than a forgettable piece of entertainment. That's a shame considering the impressive cast, with Jason Isaacs back in the shoes of playing a bad guy -- something he excels at but thankfully hasn't been pigeonholed into -- and seeming to enjoy the way his holier than thou Prophet Josiah is anything but on the inside.

Even January Jones, usually saddled with playing a woman in constant frustration, finds her outlet here as Sarah, a widower due to Josiah's ire. There is something interesting going on with Josiah that seems to be one of the most redeeming qualities of the film. As a devoutly righteous man, when you cross the Lord you cross him and through that he feels justified in dealing God's ultimate punishment.

You have to do more than cross him as a person, though. He has a principle that he follows. He even asks for the repentance to God of someone in his sights, but it's a hollow request that is wholly humiliating. The world here is cruel and dangerous. People die, and often. Sarah at one point leaves a wake of bodies so large that it becomes comical. Sex is also a very integral part of the film, with those without a woman constantly looking to take advantage of the ones around, whether forcefully or just by being a peeping tom. Even Josiah is not above looking lustfully upon women, married or not.

The highlight is the danger that Josiah presents and the way that he and Sheriff Jackson have verbal showdowns. To give an idea of the menace in the air, we see Josiah take delivery of a lovely imported wood table, and he instructs his wives to keep very good care of it. When someone remarks on the beauty of it as they all sit down to dinner, he starts to ramble about where it came from and the way it was made. There's a glint in his eye as he talks about it. As the discussion moves along, we see Jackson call for an oversized knife. He uses that knife to explain geography by etching into the wood. The air goes electric as he delves into the surface of the fine wood table. There's a hint of a threat, even if it is never spoken.

For anyone to tear up a dinner table like that, especially back then, is a sheer sign of disrespect. But was it an offense against God? No, it certainly wasn't. And that's what makes Sweetwater so interesting.

Review originally published in slightly different form during the Dallas International Film Festival in April 2013. Sweetwater opens in select theaters in the U.S. on Friday, October 11.

Do you feel this content is inappropriate or infringes upon your rights? Click here to report it, or see our DMCA policy.
Ed HarrisJanuary JonesJason IsaacsLogan MillerWestern