Jim Tudor
Featured Critic; St. Louis, MO
Tweet Post Submit
In a rare occurrence, American narcissism trumps Hollywood's modern global cash-grab mentality, but still maintains all the lowest common denominator tropes of the latter with Free Birds - an obnoxious 3D animated children's misfire that's throwing its gizzard in the ring for title of "perennial Thanksgiving classic." Never mind that Thanksgiving is an essentially American holiday, leaving viewers in the rest of the world (as these sorts of films are ordinarily shamelessly engineered to innocuously play across the board) to wonder what the heck this holiday is, and what all the fuss is about. This is a turkey of a film for the whole MSG-addled family, undercooked to imperfection.

Earlier this year, the 3D computer-animated movie Turbo drew criticism for being so far fetched and whack-a-doodle in its concept that perhaps it signaled the drying of the lucrative and vivid creative well such films spring from. Turbo was about a garden snail that gains super speed, allowing him to live his dream of racing against actual cars in the Indianapolis 500. As screwy as that was, Turbo coasted on its middling charm, and somehow worked in spite of itself. My young kids had no idea what was going on, but hey, that snail was fast.

That film's contrivance, however, was nothing compared to that of Free Birds, another such entry that blindly goes too far with concept while stooping low for its gags. Only this time, there's no charm, the animation isn't impressive, and the concept is something no one in his or her right mind could ever root for. Indeed, Free Birds is one of the most ill-conceived movies in a very long time. It doesn't know its audience -- it may not even have one! -- and fails on every fundamental level. 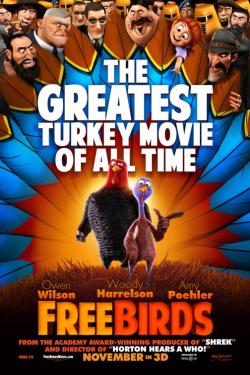 Free Birds, utterly desperate and unfunny, is a dish served unfortunately cold. The time travel story is just knotty enough to disengage whatever interest that kids in the audience would yield. The jokes of the film consist entirely of characters running into things, shouting, and falling down. There is absolutely nothing there to woo any viewer over the age of eleven.

Furthermore, and more troubling, is the fact that Free Birds sets out to fill the gap of "family Thanksgiving classic" with a story all about undoing what's best about the said holiday: the food. Culturally, it's bad enough that the intended Thanksgiving notion of relaxed family togetherness has been undermined first by unrelenting football and now the rampant consumerism of "Black Friday" encroaching into the entire four day weekend - now we have Free Birds.

Owen Wilson (doing nothing to sound different from his Pixar character Lightning McQueen) voices Reggie, a lightweight turkey who, for reasons unexplained, is far smarter than the other turkeys, and is the only one with a blue head. When the President of the United States shows up for the annual ceremonial pardoning of a would-be Thanksgiving turkey (yes, this is actually a thing), lucky Reggie is selected to go live a life of luxury at Camp David, watching television and ordering pizzas to his heart's content. It's every kid's dream and every parent's nightmare, but the whole thing is cut short when the no-nonsense larger-framed time traveling turkey Jake (Woody Harrelson) arrives to whisk Reggie off to the far past - the first Thanksgiving - when they can change history and "get turkey off the menu." 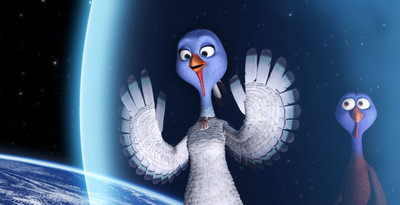 While raiding the past, Reggie finds love with the only female turkey in the movie, an empowered and eerily curvy bird named Jenny (Amy Poehler). Time travel mayhem ensues, resulting in time loop shenanigans that anyone who's ever seen a time travel movie will anticipate from the outset, and children in the audience will be confused by.

[SPOILER:] In the end, they succeed in replacing the traditional Thanksgiving turkey feast with terrible Chuck E. Cheese pizza, served lukewarm in a cardboard box - the worst possible outcome for anyone in the audience with taste buds. The film actually presents this as a positive outcome, despite the fact that all its talk of Thanksgiving dinner had my mouth watering for turkey throughout. It's a plot premise that anyone who is in favor of great meals cannot be in favor of. Thus, most people will be compelled to hope Reggie and Jake fail.

But it also begs the question, since when does Chuck E. Cheese deliver?? And if they did, who would voluntarily select that over any other, much better pizza? Was this a promotional deal that happened late in production, as they presumably were holding out for but failed to secure product placement from Domino's or Pizza Hut? And, why when the pizza guy does arrive in the time machine to provide the meal for the first Thanksgiving, is only one pizza box in the stack a Chuck E. Cheese box while all the others are just generic "pizza" boxes? Were the filmmakers trying not to appear too blatant in their obvious product placement? Or did that specific Chuck E. Cheese maybe run out of Chuck E. Cheese boxes, forcing them to make due with the generics? [END SPOILERS]

All of those questions are more engaging and more interesting than anything that goes on in Free Birds. And the fact that I was so pre-occupied with them signals a basic and epic narrative failure. The filmmakers weren't even bothered to include the classic rock tune from which they derived the title. (For more on that, don't miss the wonderful music documentary Muscle Shoals, which is currently playing.) A line from the song is "And this bird you cannot change," but all these birds want is change. But, in terms of stopping the current drying up of the creative well for these 3D animated movies, Free Birds changes nothing. It offers only window dressing in lieu of turkey dressing. 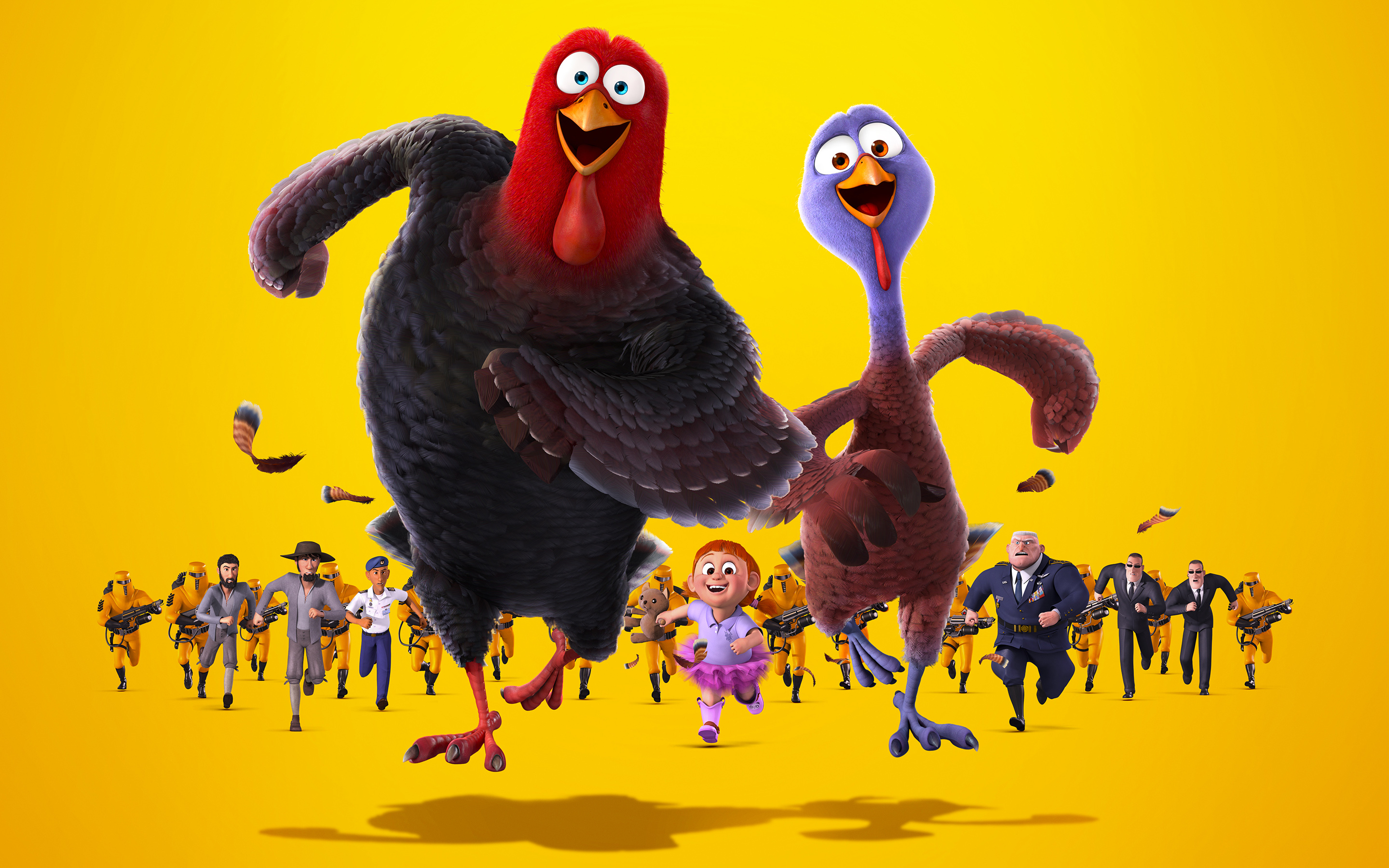 Do you feel this content is inappropriate or infringes upon your rights? Click here to report it, or see our DMCA policy.
animationJimmy HaywardOwen WilsonReel FXWoody Harrelson