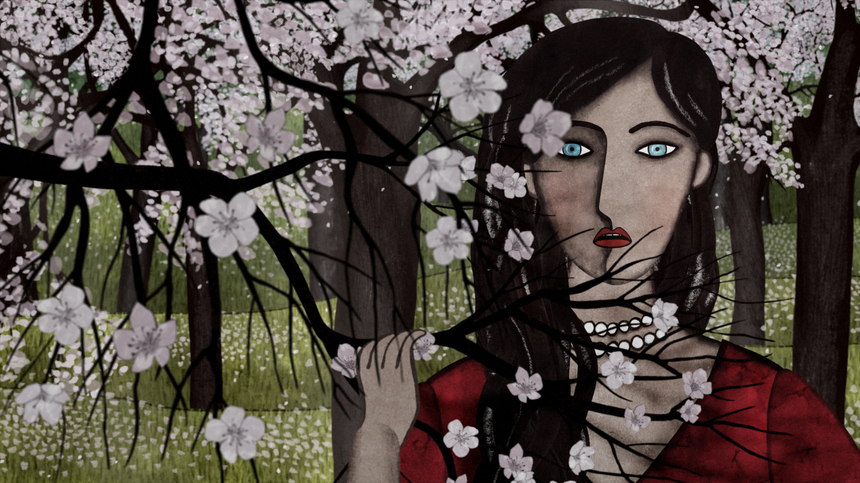 Twitch has already reported on the recent Slovak wave of award winning shorts. The wave keeps rolling and a new short sees the light of day. Given the country´s size, the animation scene is not so vast so the names keep repeating. Snow is helmed by Ivana Šebestová who emerged on the local scene with her master thesis Four, which harnessed a handful of accolades on the festival circuit. And she has not been idle ever since. Šebestová has lent her helping hand to colleagues on various projects, one of which was the animated short musical Stones directed by Katarína Kerekesová (several awards in the pocket as well).

Snow has already made the festival rounds and is now being screened at home on the Slovak arthouse circuit. Film clubs accommodate Project 100, a touring showcase of non-commercial films, where Snow is screened as an appetizer before Blancanieves, the Spanish retro retelling of the popular Snow White fairy tale.

The film took six years to finish and is animated in classic cut-out form which is later digitalized and all the movements are made in computer. This working process might not be as pragmatic as working out the whole animation as CGI but it cunningly enables to nostalgically fuse the roots of animation with modern day technique. Something that transpires also though the story itself as it is set against the backdrop of the 1950s while mirroring a universal theme.

The sets are well made rendering an intoxicating retro mood. Despite smooth animation, the shade of cut-outs persists as a stylish aesthetic. It´s crucial to retrieve the traditional animation process not only to keep it alive, but as a driving element, or rather framework, to fully crystallize the vintage touch of a forgotten era.

Snow tells the story of a young lady amidst self-discovery. The main ingredients remind us of slushy romance, foggy amorous glances and a manly object of affection. She is working in a café and he is trying to find a perfect snowflake on the other side of the globe. The narration has a surgically precise structure using mostly images, juxtaposing between the young lady's tale and the man's journey. Dialogue is absent, and it´s obvious that storyboards were the main design tool.

Despite the story´s linearity, the well-set pacing assures a refined flow. The melancholic mood underpinning the first act is soon to be exorcised not only by swift editing, but also a smart twist opening a new perspective. Things are not how they have looked at the first sight. Soon the mood shifts towards a more feral array negating the lemonade-sweet expectations and subverting the romantic formula.

Snow could be easily disregard as "girly stuff" but that would a huge understatement. The romance gone bad is based on a psychological angle digging into the female psyche in an introspective manner. The collision of fantasy and reality happens through the introduction of Eastern philosophy.

In this regard Ivana Šebestová did her homework right. Snow is a visual poem (accompanied by excerpts from a poem of the same name) which will stick with viewers for some time.

Snow opened in Slovakia on September 19 as a part of the Project 100 .

Do you feel this content is inappropriate or infringes upon your rights? Click here to report it, or see our DMCA policy.
Animated shortIvana LaučíkováIvana ŠebestováshortsSlovakiaSnow